Episode 230 of the Effectively Wild podcast featured an interesting discussion on strikeouts and walks this season. Strikeouts are up this season for a fifth consecutive year while walks continue to fall. Heading into play on Monday, there were 56 pitchers who had strikeout-to-walk ratios of at least 4.0 with a minimum of 25 innings pitched. That is seven more than in 2012, which shattered the previous record of 33 that was set in both 2010 and 2011.

Walks are a bit harder to come by these days, but for some hitters, getting that first walk solves some ills they are having at the plate. The best example of that would be Josh Donaldson. In 2012, Donaldson was twice optioned back to Triple-A Sacramento by Oakland in the first half of that season. In his final game before his second option, Donaldson walked. It was the first time he had walked in 2012 and he went to the minors with a .153/.160/.235 slash line in 100 plate appearances.

He was recalled in August, and since that date has gone on to hit .299/.366/.488 in 516 plate appearances with a nine percent walk rate, thus spawning my latest bit of statistical fun. Never underestimate the power of that first walk.

This season, Jeff Keppinger fell into that role, as he began the season with 135 walk-less at-bats. That number actually goes to 145 if you include his final 10 plate appearances from the 2012 season, and he hit .182/.191/.203 before drawing a bases-loaded walk on May 16 against Michael Kohn to break the streak. Keppinger has hit .305/.345/.354 since earning that first walk and now has a six percent walk rate and an eight percent strikeout rate—all numbers that are right in line with his recent seasons.

The overall numbers in 2013 are still very unattractive for Keppinger, but the numbers over the past month offer some upside for those willing to acquire him at a discount and looking for help in batting average. There was some hope that Keppinger could hit for a little more pop moving from Tropicana Field to U.S. Cellular Field, but he simply has not been able to drive the ball too far this season with few of his batted balls reaching the fences. 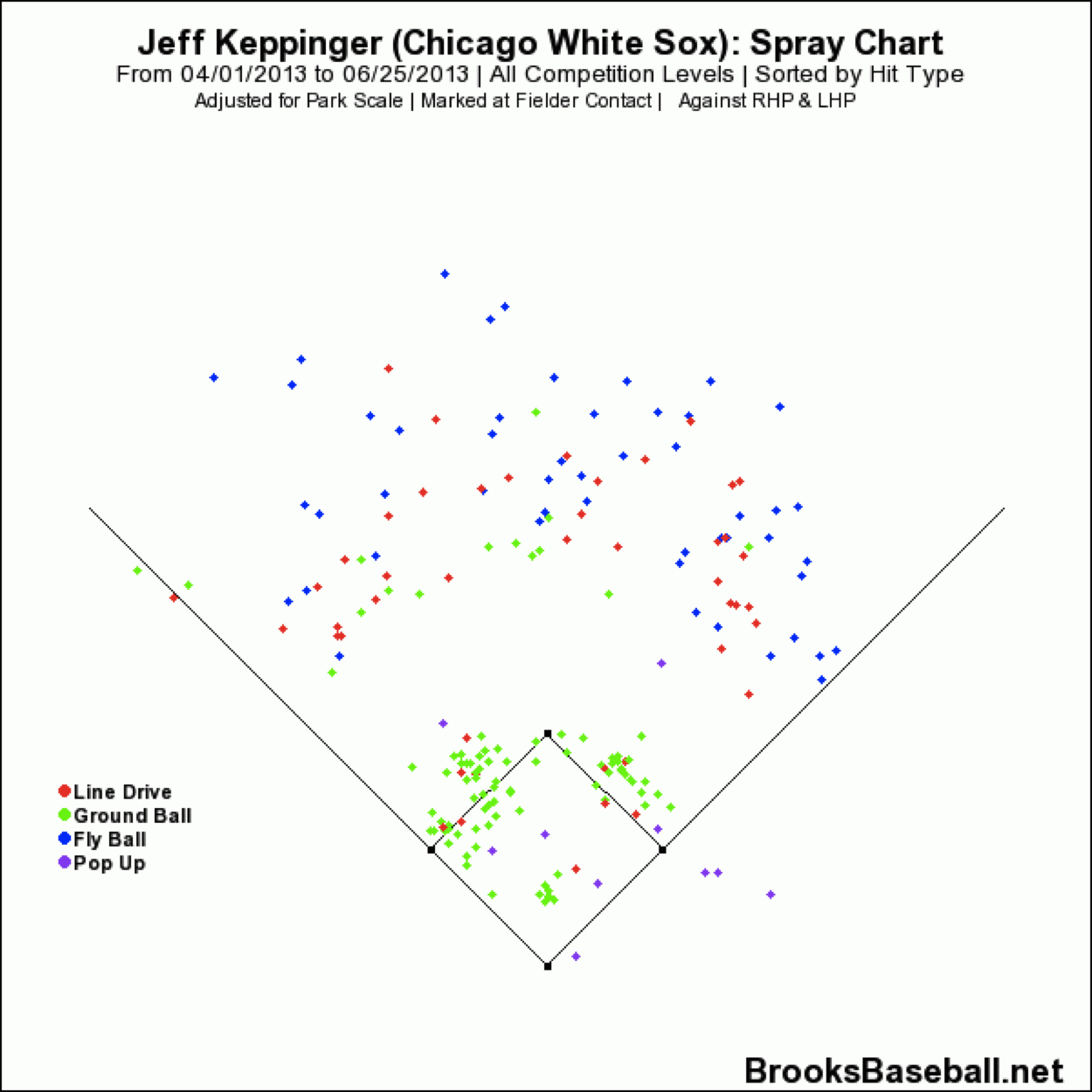 While on the topic of patience, Wil Myers owners were finally rewarded for exercising extreme patience with his promotion on June 17. While it felt like Myers had been in Triple-A for 2,500 plate appearances, the reality was that he has just 728 career plate appearances at the level. That would give him fewer career plate appearances there than the likes of Adam Jones, Andrew McCutchen, Yonder Alonzo, Josh Reddick, Neil Walker, and his teammate Desmond Jennings.

This was always the plan with Myers, as the Rays, while adhering to future budgets with one eye, watch the skills of the player with the other one. Once they call up these types of hitters, they stay up. Since Matt Joyce and Jennings were promoted to the big-league level, they have remained up, and the same will happen with Myers. If a player spends too much time in Triple-A, it is not always due to budgetary concerns. The Baseball Prospectus Stats team pulled a report showing all of the prospects making a top 100 list from 2007 to 2013 and their career Triple-A plate appearance totals. Here are players with 500 or fewer plate appearances in Triple-A who have yet to achieve a career WARP of at least 10.0 in the majors:

In each of those cases, we can still hear echoes of the “Free ______” campaigns waged on social media in hopes MLB general managers were reading them. Conversely, each of those players has struggled for lengthy periods of their playing career while some, such as Gomez, are just now reaching their potential while others continue to work on finding it.

Patience pays off for real-life players pressing for results as well as fantasy owners pressing for player promotions to happen on their mystical schedule rather than the team’s. Or, as Margaret Thatcher once said, we “are extraordinarily patient provided I get my own way in the end.”

You need to be logged in to comment. Login or Subscribe
bobbykester
Jeff Keppinger isn't playing right now, is he?...He plays once every 3-4 days...He needs to get traded to Baltimore.
Reply to bobbykester
moonlightj
He's in the 1st year of a 3-yr deal. That kind of deal is tough to move
Reply to moonlightj
pobothecat
Well, when you've got a clutch late-inning pop-up catcher like Beckham, it's tough for anyone else to get playing time.
Reply to pobothecat
BPKevin
Augh! That was painful as an Addison Reed owner in a tight NetSaves race.
Reply to BPKevin
kringent
Are you thinking that lack of time in AAA is perhaps predictive for difficulty of MLB transition in the future? It makes intuitive sense, but I'm not sure every team treats AAA the same. In a recent chat, Jason Cole said AAA culture can be weird and teams don't always want to expose top prospects to that. In some instances, AAA is comprised of embittered guys who feel they never got a shot, or past-their-prime guys grinding out a paycheck, etc.
Reply to kringent