One of the early criticisms of the Towers of Power Fantasy Hours podcast was that Paul Sporer and I were too agreeable on players and topics. For those that are not aware, Paul and I have known each other since 2000, and I helped introduce him to the advanced metrics of fantasy baseball. Given the amount of baseball discussions we have had throughout the years, it is easy to understand why we are rather agreeable on most players. Unfortunately, that does not hold up when it comes to Clay Buchholz.

Buchholz is a pitcher that Paul doesn’t care for, and he loves to poke fun at the fact that I am a believer in the Red Sox’ right-hander—as evidenced by his handy artwork: 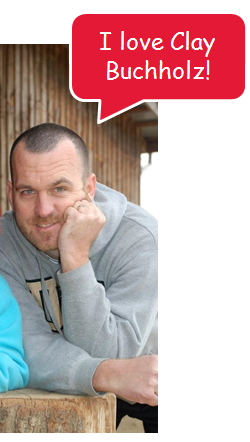 The other sore spot on Buchholz’s résumé last season were his boom-or-bust outcomes. After starting the second half of the season off with seven strong outings, he finished it by going 0-5 with a 5.62 ERA and allowing 71 base runners in 49 2/3 innings of work.

It is early in 2013, but the returns on Buchholz have been very strong. He has permitted just 11 hits in 22 innings of work. And while the 10 walks are a bit of a bloated rate, the fact that he has permitted just one home run in his first 27 fly balls this season is very encouraging.

If we look at his pitch outcomes, not much has changed for Buchholz. If we compare his 2013 pitch mixture to what he has historically done, we still do not see that much of a difference. Where we do see a change is in the fact that Buchholz has shifted his position on the rubber—a move that he actually made in the second half of last season: 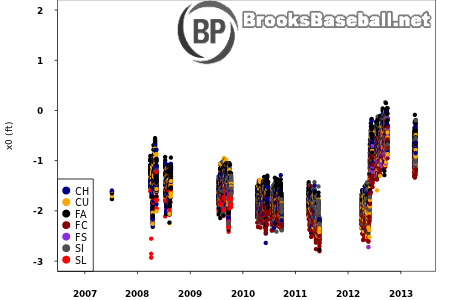 Buchholz’s starts in 2013 have all been within the division, as he has faced Baltimore, New York, and Tampa Bay. One would think that teams that have familiarity with Buchholz would have more success, but all three have had a tough time squaring up the right-hander, especially the Rays. Admittedly, Joe Maddon’s offense has been rather offensive in 2013, but Buchholz had lost his last five starts against the team before dominating the Rays over the weekend.

Is this another boom cycle for Buchholz with another bust period right around the corner? So far, the results are quite nice and bear watching, especially if he can hold on to his increased strikeout rate.

On a separate note, the past few days for me have been much like Angel Hernandez’s strike zone—all over the damn place. On Thursday, I learned that one of my best friends in the world lost his mother—someone who was always thankful I kept her son out of even more trouble than he got into on his own. Friday, I celebrated 10 years of marriage with my much better half, as my insane travel and baseball-writing schedules have yet to chase her away. Yesterday, we watched an impractical and immoral act unfold at the Boston Marathon finish line, leading to an unnecessary loss of lives and irrevocably affecting many, many others. Forgive me if I did not have specific fantasy advice to offer you on Twitter or email yesterday, but anything I would have advised would have been offered without thought or passion, and that is not who I am.

You need to be logged in to comment. Login or Subscribe
aikman72
Great article , but even better ending. Thank you
Reply to aikman72
jfranco77
I kinda figured you'd have mixed feelings about your BFF whitewashing your Rays.
Reply to jfranco77
moonlightj
as I said on Twitter - Buchholz is just the type of pitcher that gives the Rays troubles in that he he can throw a ball toward home plate.
Reply to moonlightj
mtgannon
Nice ending to the piece (and a good article as well). As a Twitter follower of many of the BP and other fantasy/sabermetric baseball it was great to see how most everyone handled yesterday's tragic events.
Reply to mtgannon
sporer24
Sick artwork.
Reply to sporer24
Gotribe31
Yeah, Angel Hernandez really is the worst.
Reply to Gotribe31