Borrowing a bit from Toby Keith’s hit a few years back:

I ain't as good as I once was
I got a few years on me now
But there was a time, back in my prime
When I could really mow ‘em down

We have all seen pitchers decline as they age, losing velocity on their fastballs or crispness on their breaking pitches. Pitchers, like most assets, eventually see their talent depreciate. The pertinent question is, can some of them stem that tide or even turn it around? 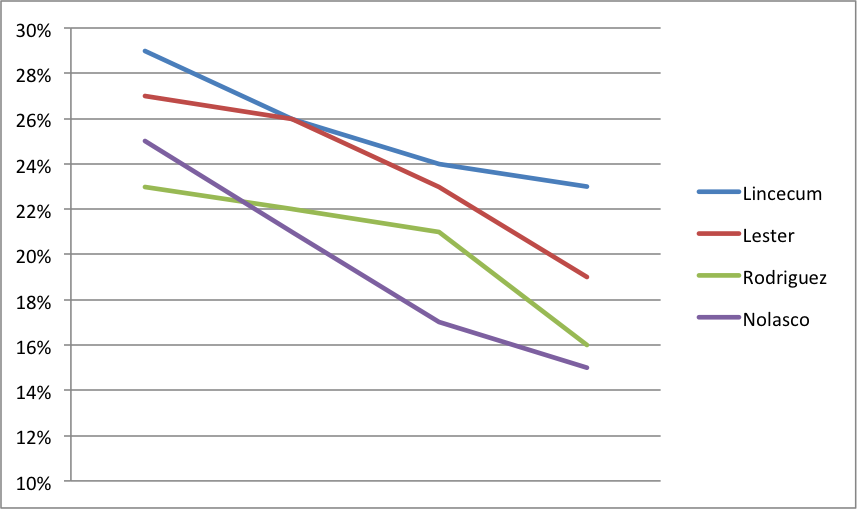 If we were to rank those pitchers by their 2013 ADP, Lester comes in first at 128, Lincecum next at 142, Rodriguez next at 287, and Nolasco trails the trio at 419. Nolasco is an afterthought at that draft spot, but people are rather high on Lester after his strong spring and Lincecum’s name value combined with his strong post-season showing in relief has kept both of them in the top 150. If either pitcher is going to earn that value, or if Rodriguez is going to be a late-round bargain in 2013, he will need to change the direction of the trendlines on the graph above.

While past performance never guarantees future results, the good news is that pitchers before these four have been able to stem the tide and turn around declining strikeout rates, with three very recent examples. 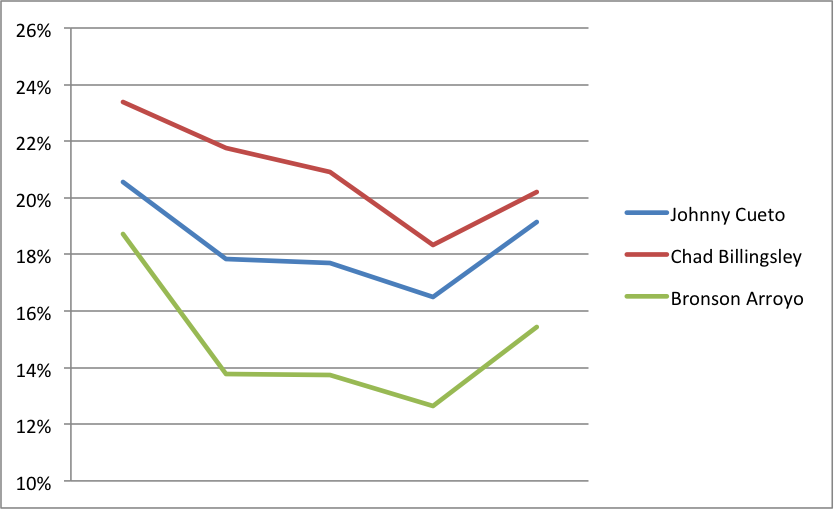 Since 2000, there are 32 examples of pitchers stopping four-year slides in strikeout percentages. That group averaged a three percent improvement in the fifth year after that four-year decline, and the average age at which pitchers entered the group was 29. The late Darryl Kile is the best success story, as his strikeout percentage went from 23 percent in 1996 to 13 percent in 1999, in his last season with the Rockies. In 2000, he joined the Cardinals and saw his strikeout rate jump from 13 percent up to 20 percent.

Since 1970, there have been 75 instances of pitchers turning around declining strikeout percentages in the fifth year after four straight years of decline. Just eight pitchers have turned that trend around by five percentage points or more: Moore, Kile, Curt Schilling, Juan Guzman, Nolan Ryan, Josh Beckett, Andy Pettitte, and Mike Hampton.  In the cases of Kile and Hampton, both pitchers spent their final two years of decline with the Rockies, and a change of scenery, which pushed them out of the thin air, helped them regain their strikeout rates in year five.

Jon Lester, Tim Lincecum, and Ricky Nolasco are certainly young enough to potentially recover some dominance, but the odds are stacked against Rodriguez, who is 34. Rodriguez, after three straight seasons of striking out at least 20 percent of the hitters he faced, saw his strikeout percentage fall to 16 percent last season. Since 1970, only 11 pitchers have turned around declining strikeout rates in or after their mid-30s: Jamie Moyer, Joe Niekro, Rick Reuschel, Woody Williams, Frank Tanana, David Wells, Jamie Moyer, Jim Kaat, Greg Maddux, David Cone, and Tom Seaver. The highest strikeout rate of any of those pitchers in that turnaround season was David Cone, who struck out 18.7 percent of the hitters he faced in 2001 at age 34, while everyone else in that sample was at 17.3 percent or lower.

Rodriguez ain’t as good as he once was, and that’s just the cold hard truth.

Thanks to the BP stats team for their help with pulling the data used in this article.

You need to be logged in to comment. Login or Subscribe
backbrush
Miguel Tejada occasionally used As Good As I Once Was as his walk-up music at Camden Yards back in 2011. Truth.
Reply to backbrush
moonlightj
that's a fantastic example of self-awareness
Reply to moonlightj
statsrath
That is outstanding.
Reply to statsrath
hotstatrat
What is ADP?

Your top two examples of turn-arounds Moore & Kile were both turned around with the help of Duncan & LaRussa.
Reply to hotstatrat
moonlightj
Average Draft Position.

Good point with Moore, although I think Kile's curveball getting out of the altitude had as much to do with his success as Duncan did. His curveball was completely neutered in the high altitude.
Reply to moonlightj
bzwolf
Just curious, is there data to support altitude neutering curveballs? I imagine that's something you can look at relatively easily now with pitchFX data.
Reply to bzwolf
moonlightj
there is, here - http://baseball.physics.illinois.edu/Denver.html
Reply to moonlightj
bzwolf
I'm late but wanted to thank you for the link.
Reply to bzwolf