This past weekend, I participated in the American League Tout Wars draft in New York City. If you missed my team review from earlier this week on the Unfiltered blog, you can find it by clicking here.  Once the expert auctions are done, I like to compare the results from the three industry auction drafts—LABR, CBS, and Tout Wars—to look for similarities and differences.  The three auctions take place at different times, with CBS coming in late February, LABR in early March, and Tout Wars in late March, so it allows us to see how hot or cold spring trainings as well as injuries affect experts’ evaluations and strategies. For example, Mark Teixeira went for $24 in the CBS auction, but after getting injured during the WBC schedule, his value fell to $6 in Tout Wars. Rick Porcello went undrafted in the CBS auction, but a hot spring has propelled his value to $4 in LABR and $5 in Tout Wars over the past weekend.

Despite the different personalities that make up the ownership rosters of each of the three expert leagues, the spending habits are rather similar on a macro level. The talent pool does not change that much over the course of the four weeks, between the CBS auction and the Tout Wars auction, so differences come down to strategy and any major injuries. 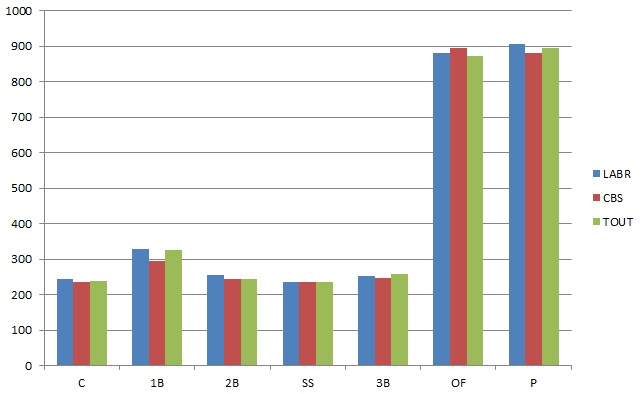 As you can see, the leagues showed little variance by position while mimicking one another nearly all of the way around the diamond.

At the top end of the spectrum, the amount of big dollar players was also nearly identical, as both CBS and Tout Wars had 51 players acquired for $20 or more while LABR had three fewer.  There were 54 players that had a difference of at least $5 between their highest and lowest bid price in the three auctions, with the most notable being the aforementioned Teixeira.  These are the groupings of players with the largest value ranges:

The differences come from a variety of reasons. Drew went from sleeper to risk, as he cannot shake his concussion symptoms. I spent $10 on Donaldson as the best power bat left at third base over the weekend, but he was dollar-day material in LABR and went for $6 in CBS. Pestano was a reserve pick in LABR but saw his value shoot up to $8 in Tout Wars, much to the disdain of Lawr Michaels, who held his final $7 in hopes of netting the Indians righty.

Sometimes, these differences can be explained by simple auction dynamics; other times, they are due to injuries. Players like Hanson, Markakis, and Ortiz have had injuries affect their values, but it is puzzling to understand a $7 variance in Ellsbury’s cost in the auctions, as he has not been injured this spring outside of a sore ankle.  Boston’s center fielder went for $24 in LABR, $31 in CBS, and $29 in Tout Wars this past weekend.

In terms of dollar amounts, here is the quantity of players that went in each range:

You need to be logged in to comment. Login or Subscribe
Lvess01
It would be interesting to see what, if any, changes there were in auction prices year over year for the AL or NL only leagues to see what impact the Astros switch had thjs year and whether it'll have a longer term impact on prices, bidding strategy or roster building.
Reply to Lvess01
swarmee
Two factors: too many moving parts, and the Astros are terrible from a fantasy perspective.

I think a lot of the "only" expert leagues added or subtracted owners expecting the Astros league change to minimize the impact of the new/reduced talent pool.

There is such a high variance on player values anyways due to roster turnover, injury, etc, that I feel there would be more noise than signal in this analysis.
Reply to swarmee
moonlightj
I diagree with the Astros. Sure, they may hit you on the ratios, but they should be good in the counting categories based on opportunity. It is why I targeted guys like Harrell, Carter, and Maxwell (and missed out on Peacock) because they won't have to look over their shoulder as much as they had to in the past.
Reply to moonlightj
swarmee
So I ran a 24-team 5x5 league on PFM and came up with the following stats (14 hitter/9 pitcher):
Top 5: Angels ($280), Nationals ($264), Reds ($253), Dodgers ($248), and Blue Jays ($242).
Surprisingly, the Yankees are still #6, even with their injuries this spring.

As a whole, the Astros are the worst team in fantasy baseball categories. So if any team was going to switch leagues and not really affect dollar values, it would be the Stros.
Reply to swarmee
moonlightj
For this year, the end game didn't seem as desperate as it was in the past. The extra team in the player pool led to the following Astros going: Harrell, Peacock, Altuve, Dominguez, Pena, Wallace, Carter, Greene (oops), Maxwell, Martinez (x2), Corporan, Castro, Norris, Veras, Bedard. In terms of hitting/pitching, the league seemed to be rather stable.
Reply to moonlightj
Hackowa
Why no articles about the NL expert leagues? I'm in i long time NL only 5x5 with 13 teams and this year we stuck with 13 teams but dropping one catcher spot and one pitcher spot. Keeping the $260 cap. I'm curious to see how this impacts prices, and wondering what other leagues did.
Reply to Hackowa
swarmee
Hmmm, so now it's a 13 hitter/8 pitcher setup? That would reduce the player pool by 13 catchers and 13 pitchers. I don't think it will affect your values much at all compared to last year. Catchers will earn less, because you'll all have starters rather than settling for negative value backups. Since the Mets demoted D'Arnaud, I would probably wait until the endgame to purchase him cheap; as a keeper league, it could pay off.

I would guess that less mid-tier middle relievers will also be drafted, since they're not that valuable in a 5x5 compared to a innings eating/k'ing starting pitcher with normal ratios (4 .2 ERA, 1.3 Whip).
Reply to swarmee
MikeGianella
I did a long recap about my experience at NL Tout Wars.
Reply to MikeGianella