The beauty of baseball lies in its unpredictability—which spawned the #ycpb (you can’t predict baseball) hashtag, as well as youcanpredictbaseball.com. While the sport may not be predictable, it only takes a cursory glance at the statistics from recent seasons to see that offense is down and pitching is up.

One particular part of pitching that is on a rapid rise is saves. Last season, there were 1,261 saves converted in baseball, and that total was just four shy of the post-expansion era record of 1,265 set in 1998, when the Arizona Diamondbacks and Tampa Bay Devil Rays brought the league to 30 teams. Between 1998 and 2012, the numbers have been all over the place, as the save stat remains as risky league-wide as it is on an individual level for fantasy owners. 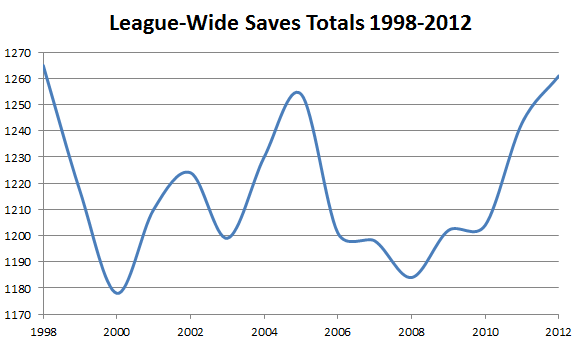 As quickly as the saves category exploded after the last league expansion, it collapsed two seasons later to its post-expansion low of 1,178. The category recovered to another boom in 2005, only to bust over the next three seasons, before turning the corner in 2008 and continuing to rise ever since.

Since we know the category has had just a seven percent variance over the past 14 seasons, the trick becomes figuring out where those saves go. What makes that an exercise in futility is the fact the saves truly do come from everywhere—after all, both Brad Lidge and Shawn Chacon saved 30 more games in seasons where they had ERAs over 7.00. Joe Borowski led the American League in saves in 2007. In fact, from 1998 to 2012, there are 42 examples of pitchers saving at least 20 games in a season in which they had an ERA of 4.50 or higher.

In looking at the current ADP reports from NFBC, we have a sample size of 156 drafts that have taken place in their format. These are the ADPs of the top 40 relief pitchers:

Under the premises that saves can come from anywhere and that high ERAs do not necessarily stop pitchers from piling up saves, a case can be made for punting the category in your draft. After all, even if you wait until pick 180, you can still land a solid skills pitcher such as Glen Perkins or Steve Cishek, and take a chance on two closers on whom the market is down: Chris Perez or Brandon League.  The League situation is rather comical, as Kenley Jansen, the pitcher behind him on the Dodgers' depth chart, is being taken three full rounds before him in drafts. Even Carlos Marmol, a pitcher everyone believes is doomed to fail, is still being drafted 22 picks before his setup man, Kyuji Fujikawa.

If you decide to wait out saves into the 200s, you are still left with good options such as Cishek, Jason Grilli, and whichever Angels reliever emerges from the first quarter of the season with the job. You also cannot forget about Tigers rookie Bruce Rondon, who continues to slide. Rondon’s current ADP is at 249, and yet I was still able to draft him with the 286th pick in my own NFBC league on Friday night.

There seems to be more uncertainty on the closer market this season than in most years. If Chapman does come back to the closer role, we are left with seven closers that should have strong seasons: Kimbrel, Chapman, Papelbon, Motte, Rodney, Soriano, and Nathan. After that, there are question marks for each of the others, ranging from injury recovery to low strikeout rates to the lack of a track record. There seems to be a clear-cut push to wait on saves this year, as the market seems to finally be coming around to the fact that saves can be found just about anywhere. They truly have no face.

You need to be logged in to comment. Login or Subscribe
baseballATeam
Saves are everywhere. Pitchers who get saves while posting a 1.50 ERA and sub-1.00 WHIP are not. With fewer people paying for saves, the Craig Kimbrel's of the world have become very cheap.
Reply to baseballATeam
moonlightj
Has he? Kimbrel's ADP is in the top 50 and he went for $23 and $25 in the expert auctions. I think that is the opposite of cheap.
Reply to moonlightj
rustydude
I find this to be true, too. Is there any way for you to reduce the sensitivity to saves, or lack thereof, within the player forecast manager? This is really the primary weakness of PFM. I play in a league that has holds, saves and QS's. The closers are so over-valued in PFM to be almost useless in projecting auction values for pitchers. In practice, I have found that 1 QS = 1 Hold = .9 * Save. The only reason that Saves are slightly more valuable is due to a slight scarcity of closers relative to starters and middies. In other words, the very best closers, starters and middies should be near the top of the PFM output.
Reply to rustydude
gpurcell
Run PFM without saves--this is essentially what I do for steals on the hitting side.
Reply to gpurcell
moonlightj
if you run the PFM with and without SGP set, you will get closers ranked in a different way. Try that out and see which one suits your needs best.
Reply to moonlightj
tbunns
Something is still off...I play in a 4x4 keeper league (AL only). While most teams have kept closers, I have not. Joel Hanrahan fluctuates between $60 and $90 based upon settings I use for the league...that should just never happen.
Reply to tbunns
swarmee
Your Centric inflation is also probably set to highly value stats you don't have. Try adjusting it.
Reply to swarmee
tbunns
PFM settings: Conservative, Pos Adj OFF, No Inf, User Cen Inf Zero (None), SGP Off...all league keepers loaded

Reply to tbunns
swarmee
Hmmm. If you post the CID number, maybe I can troubleshoot it. Or one of the site writers can peek at it.
Reply to swarmee
doog7642
Props for the SAGNOF! reference.
Reply to doog7642
boatman44
Grey strikes again!
Reply to boatman44
moonlightj
SAGNOF & Saberhagenmetrics are vernacular contributions that belong in the Fantasy HOF
Reply to moonlightj
samsdad
Something to think about when using NFBC ADP at this point is that most of the sample is made up of 'slow drafts' where rosters are 50 deep and the leagues have no FA $. I think the type of draft you're in can in some way (haven't thought this all through) affect the ADP of saves. In these drafts, you can chase saves in rounds 30+ and if you hit on one it can make the category for you. If you're in a league with daily transactions, how tight the waiver wire is may affect where you draft saves as well. As I said, not that well thought through yet, but....
Reply to samsdad
moonlightj
I agree, but I use those rankings because it addresses how the average player treats saves rather than the expert approach of punting them.
Reply to moonlightj
kddean
I'm not seeing a reason to save Motte in my NL only, 5x5, 12 team keeper league.
Not only are most of my league mates not keeping closers much anymore, but this article confirms my thought that saves can be found.
Thoughts?
Reply to kddean
swarmee
Depends how many keepers you have available. If you can only keep 5, probably best to let him go. If you keep 15, probably worth keeping him.

My NL league does not have in season waiver wires; only the players bought at auction and during the reserve draft rounds (or who arrived in trade from the AL) are part of our universe after the auction/draft. Our middle relievers go between $1-12 each based on the likelihood they abscond with the closing role.

Most teams also draft two other MRs or "closer of the future" in their reserve rounds just in case their guy gets injured.
Reply to swarmee
moonlightj
No salary concerns? Motte is a keeper for me because while saves can be found, he's one of the strongest possibilities of bringing home the bacon.
Reply to moonlightj
kddean
I'm an idiot. 12 team, NL only, 6 keepers.

Yeah, I'm leaning away from Headley big time. In the last two years I've lost Prince, Pujols and Morse, so I've been leaning heavier to offense, more than I normally do anyway.
Reply to kddean
pobothecat
A contrary thought. There are several problems with the get-saves-later strategy. First, everyone's on it. Therefore, there's way more competition for the free agent pop-ups. A couple of wrong moves and an injury and you could be screwed for the year. We've probably all been there. Second, because there's so much competition for them, you usually have to roster the presumptive heir before he has the job --- if he gets it at all. That negates a roster spot from which you could be banking actual production. Third, the free agent pop-up is just as likely --- if not more --- to lose the job as his predecessor. Third, those plan-B and plan-C closers with their 1.50 WHIPs and 4.50 ERA's do peripheral damage to related stat rankings. Are we really so sure that the high downside, dead roster slots and raggedy peripherals make this such a genius strategy? This year in particular it may well be that a Papelbon in the bank is worth two Parnell's in the bush.
Reply to pobothecat
pobothecat
(Uh .. "Fourth, those plan-B and plan-C closers...")
Reply to pobothecat
Dillon415
Why isn't Romo among the "closers that should have strong seasons?" Would it surprise anyone if he outperformed half of them? Nathan, Soriano, Rodney, Motte.. all generally less impressive than Romo. Of the seven you mentioned Romo has a better BB/9 than all of them, better K/9 than four (right under Papelbon), and a career ERA that only Kimbrel beats.. although Chapman and Pap are pretty close.
Reply to Dillon415
jlarsen
I love using #ycpf aka "You can't predict Friedman" myself
Reply to jlarsen