Paul Sporer and I have a special email address, fantasyhour@baseballprospectus.com, through which listeners send us emails that they would like us to either respond to privately or address on the weekly Towers of Power Fantasy Hour (or 2) podcast. That inbox was very busy when we first opened it in mid-2012, but business tapered off to a trickle as the baseball season ended and was nearly extinct through the winter holidays. Once the calendar flipped to 2013, people re-discovered the mailbox, and the two of us were flooded with trade and keeper advice requests. Recently, we’ve received several inquiries from people that are starting up auction leagues and wondering how to best allocate their fantasy dollars at the bidding table.

The short answer to that question is that it has no correct answer. The standard approach is to allocate 70 percent of your budget to hitting and 30 percent of it to pitching. As fate would have it, the aggregate splits from the 2012 LABR and ToutWars auction were precisely 70/30 last season. Despite the clean-cut aggregate figures, though, the results within vary greatly. One owner spent 88 percent of his budget on hitting and finished in 10th place, but several years ago, Jeff Ma spent 52 percent of his budget on pitching and nearly won the mixed league. Whatever amount you decide on before the auction begins is fine, but you should also be prepared to adjust to auction dynamics, because it takes just one or two wiseacres to throw an auction for a loop as they attempt to corner a specific statistical market.  With that said, let’s review how the experts did in their auctions last season.

There are five March auctions on the expert circuit, the AL and NL leagues in both LABR and Tout Wars, plus the mixed league format auction in Tout Wars. As I mentioned, the aggregate split was 70/30 with a standard $260 budget. Both NL leagues were identical, and the mixed league followed suit. The only variety was within the AL auctions:

Overall, 65 teams participated in the auctions, and the percentage of auction dollars used to acquire pitching varied greatly. 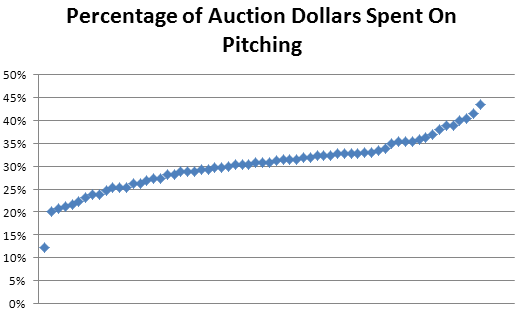 Just six of the 65 teams spent exactly 30 percent of their auction dollars on pitching, and only 15 of 65 were within one percentage point of the aggregate. While there are 65 teams in these auctions, it should be noted that there are not 65 different owners, as several owners double- and even triple-dip in the leagues. Here is how those owners allocated their budgets in their auctions:

Only Derek Carty and I were consistent between our drafts; others swung anywhere from one to 10 percentage points between their LABR and Tout auctions.

Lastly, how did the splits correlate to where each teams finished in the final standings? The draft is a very important part of any successful or dreadful fantasy season, but it is not the only way to boost or tank a team. The correlation between dollar allocations and final standings is, at best, weak, because of the mitigating factors after the auction. That said, this how the splits played out against the final 2012 standings: 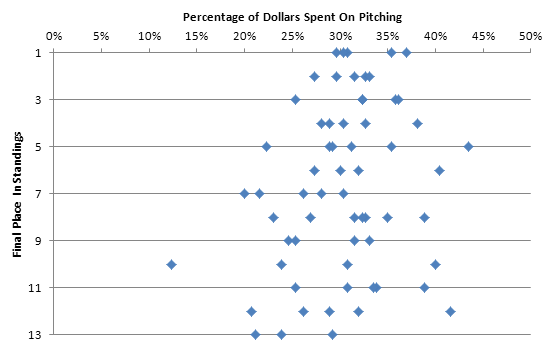 The scatterplot shows just how weak the correlation is and emphasizes that the players on which you choose to spend matter much more than your overall budget distribution. The team that spent the most on pitching finished fifth, while the team that severely emphasized offense finished 10th.

To summarize, what’s most important is to be prepared and flexible with your budgetary plans. My own strategy is planning dollar amounts on a 69/31 budget and adjusting at the auction table on my spreadsheet. While I came out with a 69/31 split in both expert auctions, I went with an extreme, 82/18 split in a local NL league due to auction dynamics, as a heavy focus on offense resulted in pitching bargains.

You need to be logged in to comment. Login or Subscribe
Oleoay
It'd be interesting to see how the first ten picks of each draft were budgeted and compared to the rest of the draft. i.e. are there some positions that tend to get more expensive (like closers?) as the options are reduced?

Reply to Oleoay
MikeGianella
I don't have data for multiple years or leagues, but I did track this once for Tout Wars N.L. in 2011.

Generally speaking, the expert market is tight. There isn't a lot of overspending at any particular juncture of these auctions.
Reply to MikeGianella
thatfnmb
How do you handle allocations in keeper leagues? For example, you have a $300 budget, 1 keeper, Trout at $10 but his true value in your league is $50. Going into the auction would you consider your hitter allocation as 10/300 or 50/340?
Reply to thatfnmb
MikeGianella
You want to adjust not only for your team but for your league as well. In this scenario, you will want to shift some of your budget toward pitching; however, depending on your league's other freezes a $40 profit might be a significant advantage, a moderate advantage, or a slight advantage.
Reply to MikeGianella
swarmee
My opinion, it's not really about valuing your team with a certain split, but the entire draft eligible group. You would still make the assessment that 70% of all draft dollars will be spent on hitters. A single player won't skew the whole field percentage; however, if 90% of the players kept with low salaries in your league are hitters, you might want to allocate more to pitchers (maybe 40% instead of 30%) since that's where the bidding wars will come.

I'm of the school that I want a fairly balanced team coming out of the auction, but I'd rather have $350 in team value (with $250/$100 hitter to pitcher split) than $320 and a more clear $210/$110 split. You can trade the excess hitting value after the auction to fill a hole.
Reply to swarmee
holgado
I'm not so sure that the scatterplot reveals only a weak correlation, given the nature of what you were plotting. That is, intuitively, at least, an owner is capable of spending either too little *or* too much on pitching, and an ideal "sweet spot" range is what you're looking for on a scatterplot like this. This would be demonstrated by a pyramid-like shape, with the top finishers all bunched closer to that sweet spot, and lower finishers further out in *either* direction. And it looks to me like that's exactly what you've shown: that spending 30%, give or take, on your pitching is the best way to go. And not because it guarantees that you'll finish in the money (it appears that many spent about 30 and still finished poorly), but because straying too far from 30 guarantees that you won't.
Reply to holgado
moonlightj
I consider the sweet spot to be rather large; +/- 5 from 30. We have teams that spent above or below that spot and finished in the top 5 as well as the bottom 3. In the end, it's more about who you purchase rather than what you spent and why great dollar values are ultimately paramount.
Reply to moonlightj
ErikBFlom
In theory, there should be just as much value in the pitching half as the hitting half. The problem is that there is far less projectable pitching value than hitting value. So, owners are much more willing to go with a $1 pitcher than with a $1 hitter.

So I am not sure if the relatively narrow planned spend is why the top guys finished on top, or they are just better at identifying pitching value and so can budget more reliably for it.

But as the high budgets of some guys who finished at 5-12 shows, spending itself isn't the driver of success. But if you know what you are doing, 36% or so is enough.
Reply to ErikBFlom
davezahniser
Jason,
I'm in a 4 x 4, with Saves, Wins, era, and K's for pitchers and HR, rbi, SB, and avg. for hitters. Closers are valued very highly in this league; does that change the allocation more to pitchers?
Dave
Reply to davezahniser
moonlightj
It's been eons since I've played in a 4x4 format, but when I did, 65/35 splits were the norm. Anyone who spent less than 30% on pitching was looked at as a radical.
Reply to moonlightj
BarryR
That's interesting, 4X4 with K's and without WHIP. Without going too deeply, I think you may be overvaluing closers a bit, as they hurt you in two categories, help you in one, and in ERA, they can help you some, but one or two bad innings and that goes away.
Reply to BarryR
Oleoay
Closers tend to help with Ks because most closers strike out around a batter and inning and most starting pitchers don't. They may not give you as many Ks, but even a mediocre closer can rack up more Ks per auction dollar spent than a good starter.
Reply to Oleoay
MikeGianella
In theory, the earnings split comes closer to $160/$100 because you're lopping of a counting category in runs. In practice, your budgeting should resemble your league wide budgets more or less. If your league is spending $175/$85 on average, budgeting $160/$100 across the board is going to probably land you a $130/$130 team and a non-winner.
Reply to MikeGianella
rogeranderson
I still play 4x4. Slightly less money is spent on pitching than in 5x5. The biggest difference is that closers and setup men are more expensive and starters are cheaper. In 4x4 you can drive three categories (without completely punting wins) with 3 starters, 2-3 closers, and 4 setup men, who often win 5-6 games because they appear in so many tie games. Which means there are lots of good starters left over for a $1-$2. Some of that savings goes to closers, a little to top notch setup men, and some to hitting.

As soon as you add K's, then your mix is more like 6 starters and 2-3 closers. Otherwise you have to punt K's.
The trend even in 4x4 has been that closers have gotten cheaper I think because they have gotten less reliable. Back in the day, top notch closers went for $35, top starters for $20. These days, top notch closers are $25, closer to 5x5 prices.
Reply to rogeranderson
rogeranderson
I spent a few years in the late 90s calculating the optimum split between hitting and pitching, and even the splits between the individual categories, by calculating return on investment. It is easy to determine the precise value that players earn in hindsight. If you were to actually draft a league after the season is over (which is quite fun partly because you get to know the winner right away), the split is 50/50. But buying players in the future is a different story. Can't really get into the methodology here, but in order for pitchers and hitters to return the same total value, I calculated that you needed to spend 68% on hitting and 32% on pitching. At the time, most leagues were closer to 60/40, so I was an advocate for spending more on hitting. This may be slightly different now, that was the steroid era, and it was 4x4, but the market seems to have settled close to that value now.
Reply to rogeranderson
bigwheels17
I play in a non-standard league, 5x5 with 10 batters (1 utility) and 8 pitcher spots. How would that theoretically change the ratio from the leagues discussed above?
Reply to bigwheels17
MikeGianella
In theory, the split "should" be 63/37.

Again, though, this applies to earnings, not prices. You want to be careful not to have a list of prices that is technically "correct" but so far out of whack with what your room is spending that you swing and miss at your auction.
Reply to MikeGianella
rogeranderson
Mike, why should the earnings split be 63/27? What should the prices split be?
Reply to rogeranderson
doshspy
I'm in a H2H 6x7 league. How would this change the auction split. For reference 4/6 hitting catergories are quantitative and 5/7 pitching categories are quantitative. I'm thinking I need closer to a 60/40 split.
Reply to doshspy