While we might be in for quite a wait before another Yu Darvish comes over to the States, this offseason does bring us an interesting arm from the Eastern Hemisphere. As you’ve heard, southpaw Hyun-Jin Ryu was recently posted by his Korean Baseball Organization team, the Hanwha Eagles, and the Los Angeles Dodgers won negotiating rights with a $25.7 million bid. While the Dodgers have not yet decided whether they will sign Ryu or allow him to return him to Korea for another year, there stands a real chance he will be coming to Major League Baseball for the 2013 season. Today, I’ll be discussing what we should expect in the case that he does become a Dodger.

By the Numbers
We won’t spend too much time on Ryu’s numbers because the context of the league he plays in can obfuscate a player’s true talent level. The KBO is interesting in that the talent level is very diverse. From what I’ve heard, there are players ranging in skill-level from American collegiate ball all the way up to MLB-caliber talent. In terms of overall quality, the league is said to be a bit below Nippon Pro Baseball (where Darvish came from), but naturally, this wide range of talent makes KBO numbers hard to directly translate to Major League Baseball. Still, they’re worth a look, so here’s what we have on Ryu over the past four seasons in the form of percent better than average—so for 2012, his ERA was 30 percent better (i.e. lower) than league-average. (2009-2010 data collected from Baseball Reference, 2011-2012 data collected from MyKBO.net):

Ryu has certainly been a very good player—one of the very best in KBO. To provide some context, Darvish posted ERA numbers well above 100 percent, though Ryu’s performance in strikeouts and walks was pretty much on par with what Darvish did in NPB. Ryu has led the KBO in strikeouts for years and even bumped his strikeouts up considerably this past season. He also appears to have formidable control, although he’s struggled with home runs over the past two years (which could be a sign of bad luck).

Scouting Hyun-Jin Ryu
To get a better idea as to the kind of pitcher Ryu is, I recently spoke with some scouts who have seen him pitch over the past few seasons.

There is some debate as to which role Ryu is best suited. Some reports in the States (the most prominent being Keith Law’s) have said he’ll succeed as no more than a long reliever, and my scouts said they’d heard other scouts expressing the same sentiment. None that I spoke with personally, however, shared that opinion (and it’s their opinions that I trust the most). In fact, they were adamantly positioned in the other camp—the camp that thinks Ryu can be a quality major-league starter—making specific mention of these concerns and firmly disagreeing. And with a total cost that figures to be in the ballpark of what Oakland paid for Yoenis Cespedes last offseason on a deal two years longer than what Ryu is asking for, it stands to reason that the Dodgers like him as a starter as well.

So what does he bring to the table? Ryu is said to throw a four-pitch mix. His fastball is average, a bit straight with velocity in the 89-91 mph range, though he can dial it up to 94-95 at times. His best pitch is his changeup, easily a plus offering with good arm speed, deception, and fade. He fills out his arsenal with two breaking balls, both of which grade out around average and break at the same angle. His slider is the better of the two, with the slow curve used more as a show-me pitch.

Ryu’s plus command, particularly of his fastball and changeup, help his pitches play up and keep his walk totals down. In total, it seems like he has an arsenal that is capable of striking out batters, though he could be an extreme fly-ball pitcher depending on how frequently he uses the fastball.

Mechanically, his arm works right and he’s able to repeat his delivery well. There are some small issues, but they’re nothing to worry about.

PITCHf/x Data
We actually have a bit of PITCHf/x data on Ryu from the 2009 World Baseball Classic. While the data is three years old now and is a very small sample, the data seems to match up pretty well with what scouts have said about our subject. 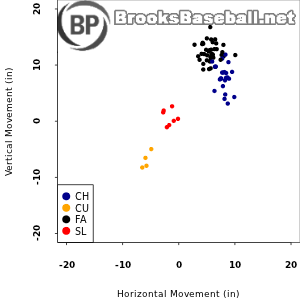 His fastball averaged 92 mph—a little faster than he’s said to throw now, but it is relatively straight. It also appears to get a ton of rise, which further explains why scouts believe it’s good enough to float him to his secondary stuff. His changeup doesn’t appear to feature a lot of tumbling action, although it did come in 10 mph slower than the fastball, and the scouts said it was successful more as a result of deception and fade (which it gets a bit of here). It’s interesting to note that his slider and curve were used sparingly—a combined 14 percent of the time—which makes sense if they are fringier offerings but may also explain why some view him as a reliever.

Again, take all of this with a grain of salt. We’re looking at one game’s worth of data from several years ago, but it is interesting nonetheless.

Potential Concerns
Now onto the things that might cause some issues for Ryu. The first and most important, of course, is whether the Dodgers decide to sign him at all, which seems to be contingent (at least in part) on what the team manages to accomplish at the Winter Meetings. Dan Evans pointed out that working in Ryu’s favor is “the huge Korean population in the Los Angeles area, plus the Dodgers’ long-time and current links to Korean baseball.” Not only will the Dodgers be valuing Ryu’s on-field skills, but they’ll be valuing his contribution to the business and marketing side as well.

As with any pitcher coming over from Asia, there are a multitude of hurdles that Ryu will have to clear—new competition, different pace of the game, cultural difference, language barriers, etc.

One thing he may not have to worry too much about, though, is the physical baseball (at least relative to other Asian pitchers making the jump). Up until last year, pitchers coming over from NPB had been using a ball that differed quite a bit from MLB’s ball, but I’m told that the official KBO baseball is the same size and weight of the official MLB ball with the same stitch count (108). The KBO ball has lower seams and is still made of horsehide, but those are the only physical differences. The lower seams have the greatest effect on the splitter, but Ryu doesn’t throw one. It’s also worth noting that Korea doesn’t rub their balls with mud—which gives pitchers “better control and a firmer grip”—like MLB does. Despite the similarities, the ball will still feel differently, and different pitchers adjust to the new ball quicker than others based on their individual neurology, pitch grips, etc.

Dan Evans said that, when he was running the Dodgers, he would “always send the new pitcher the MLB baseball right away, so they could get used to it as much as possible in bullpens and long toss as they prepared for the upcoming season,” and a Dodger executive has said that the team will do the same if they sign Ryu (if agent Scott Boras hasn’t already done so). Add all this up and consider that Ryu has also used MLB-type balls in the WBC and other international competitions, his feel for the ball figures to be better than that of other Asian pitchers would be right out of the gate.

Japanese pitchers also have different conditioning programs, workloads, and rest schedules. Korea is said to be in-between Japan and America in this regard, and Ryu often worked with one fewer rest day than Darvish did in NPB, so the concern here seems to be as minimal as it can be.

There is also the issue of Ryu’s weight. If you’ve yet to see a picture, he’s a big boy. His weight is distributed pretty evenly, though, and he’s been pitching with it for years. Scouts don’t seem too concerned about it.

Something that one did express concern over, however, was the Tommy John surgery Ryu had in high school, wondering how long the new ligament will hold up. BP injury expert Corey Dawkins took a peek into his injury database and found that the vast majority of guys who get TJS never require a second surgery. He noted that those who do usually do so after two or three years, likely because they never fixed the underlying issue (bad mechanics, overuse, etc.). A few pitchers also required another surgery 8-10 years later. I’m not sure exactly when Ryu had his surgery, but it was no later than 2005, putting him into that 8-to-10-year time frame presently. It’s something to keep in the back of your mind.

Expectations
All in all, while some believe Ryu is nothing more than a solid reliever, the consensus among those I spoke with is that Ryu has the tools to be a number-three major-league starter immediately. Pitcher-friendly Dodger Stadium (plus Petco and AT&T in the same division) will help, as will a Dodgers defense that could wind up well above average, depending on what happens this offseason. While Ryu’s less-than-dominating stuff means there’s little upside on his projection of a third starter, he seems capable of being a fringe back-of-the-rotation type in a mixed league and would be a good value for a couple dollars in NL-only leagues this year. For those in keeper leagues, know that Ryu will turn 26 years old just before Opening Day, so if he succeeds in 2013, he stands a good chance of remaining effective for several years to come.

You need to be logged in to comment. Login or Subscribe
jm010e
Great analysis, as always, Derek. I'm curious as to what weight (if any) you give to the Dodgers' history in successfully transitioning pitchers from the Asian organizations to MLB. Given the successes they've had with pitchers such as Kuroda, Nomo, Saito, and Park, it seems that there's *something* that they just do better than other franchises (where the success has generally been of short duration or not at all).
Reply to jm010e
wilymo
you know hyun-jin is his first name, right
Reply to wilymo
derekcarty
Is it? I've seen it written both ways, and I know some Asian culture reverse them anyway, so I wasn't sure.
Reply to derekcarty
wilymo
pretty sure, yeah. it's confusing because it almost seems like the sports press has decided to do last-name-first if they're talking about the guy in the context of playing in asia and then switch to western style once he's in the states. but then not always. but generally if you see the two hyphenated names in the romanization that's the given ("first") name. kuo hong-chih, wang chien-ming, lee hak-ju.

then sometimes people don't use the hyphen and it gets even worse.

this is in chinese & korean scenarios, japan's a whole other thing

but for example if you go to his wikipedia page he's referred to as "ryu" throughout, etc.
Reply to wilymo
derekcarty
That makes sense. I've altered the article accordingly. Thanks, wilymo
Reply to derekcarty