On May 14, Jon Lester threw a complete came against the Seattle Mariners, scattering eight hits and allowing just one run on 119 pitches in a 6-1 victory for Boston. The win put Lester’s record at just 2-3 and lowered his ERA to 3.71 as Boston limped through the early part of the season. Since then, Lester’s story has been uglier than the Boston collapse of 2011; his numbers look nothing like the extremely consistent pitcher that fantasy owners came to know and love from 2008 to 2011.

Lester’s first inning yesterday sums up the whole situation rather well. The lead-off home run hit by Brett Lawrie highlighted Lester’s charitable ways. He then walked Yunel Escobar, allowed Colby Rasmus to reach third on a bunt single, and then surrendered a ground-rule double to Edwin Encarnacion. An RBI groundout scored Rasmus, and a proceeding double, a dropped strike three, and a sacrifice bunt plated the fourth and fifth runs of the inning.  Anything and everything happened in that inning to Lester, as it has throughout this ugly run of 12 starts.

How can he be doing so poorly with such good peripherals? After all, his two most frequent outcomes during this bad run are strikeouts and groundouts:

He has had some good starts during this stretch, including one on July 3 in which he allowed just one run in 6 2/3 innings, but that is the only time he has allowed fewer than three runs, and he has given up at least four earned runs in seven of the 12 starts.

Normally, a .376 BABIP would lead you to believe that Lester is giving up a lot of line drives, but that is not the case.  During this stretch, 43 percent of his batted balls have been fly balls, 39 percent groundballs, and just 18 percent have been line drives.  Let’s compare the line drive rates of balls in play for each pitch type from last season to each month of the 2012 season:

In the 2010 season, Lester’s cutter was the toughest in baseball to hit according to Mark Simon’s work from the ESPN Stats & Info Department. That season, opponents had just a .424 OPS off the pitch, which was 21 points lower than the results Mariano Rivera had from his own cutter. Historically, that has been a good pitch for him, but the results from that pitch this year are a clear step backwards:

He is getting fewer swings and misses this season than he has previously, and more of the cutters are being put into play than ever before.  This is a problem since he is throwing the pitch more frequently than he did last year, becoming even more reliant on it in recent weeks. 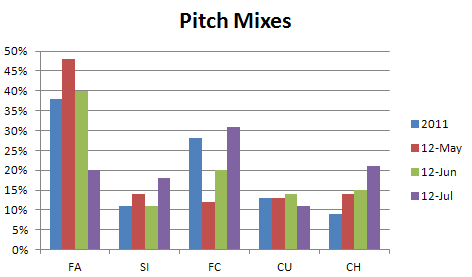 Visually, here is how Lester has fared against right-handed hitters for his career versus the 2012 season: 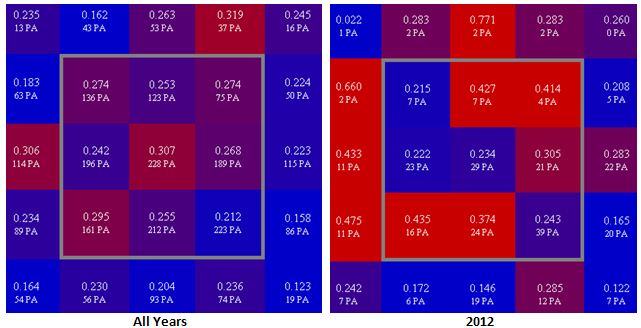 For the season, Lester has lowered that four-seam/cutter mix to a 57 percent mixture against right-handed hitters, but the rate has risen over the last few months. The mixture was 54 percent in May, 59 percent in June, and 60 percent so far in July.  Albert Einstein famously said, “Insanity is doing the same thing over and over again and expecting different results.” Lester, rather than changing his recipe against righties, continues to add it to the mixture, which is leading to less fortunate results. 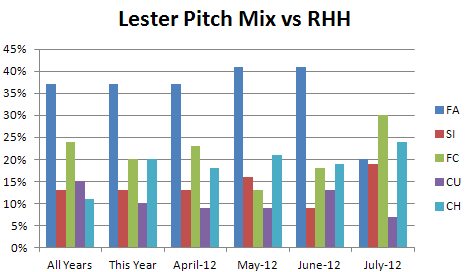 In addition to these issues, Lester has a concerning trend with his declining strikeout rate. While his K/9 is strong during this run, his K% has declined each of the previous four seasons. He had a 27 percent K% in 2009, dropping to 26.1 percent in 2010, 22.8 percent in 2011, and just 19 percent this season.

In summary, there are some redeeming skills for Lester, but just not as many as there were in years past. He still gets run support in bunches and can get wins if he can control his damage, but he must stop this bull-headed trend of attacking righties as he has always done because it is simply not working. Until he does, he will continue to frustrate both Red Sox fans and fantasy owners.

You need to be logged in to comment. Login or Subscribe
dandaman
Paul's comments making Lester and auto-start 2 weeks ago lead me to trade Matt Moore for him. 17 earned runs later my season may be swamped. Nice article Jason, but I have little confidence that a guy like Lester can "stop his bull-headed" ways. Seems like yet another stubborn Boston pitcher to me.
Reply to dandaman
jimcal
Not pointing fingers but does any of this attribute to catcher at all?
Reply to jimcal
moonlightj
It depends who calls the games in Boston. Do the catchers do it (as they do in TB), do the pitchers, or does Valentine? cERA doesn't mean much but he's had worse results with Salty back there than Shoppach, fwiw.
Reply to moonlightj
tballgame
Near as I can tell, every pitch except the change-up is less successful this year than it has been in the past for Lester. And he's relying on it much more than he has in years past.

I can't tell from the strike zone charts and related text how you think Lester needs to alter the location of his pitches or 'change the mixture'. Is there something else that is working that you think he should do more of? If the fastball/cutter mixture has worked for 6 years, should it be scrapped over half a year of scuffling for something without a track record of success? And how much of this is luck vs. a 2% uptick in balls in play for the cutter?

If the curveball is successful, but he's ignoring it, than I can understand the bullheaded complaint. Instead, it seems empty without a more substantive suggestion for better performance. If he went the other way and dropped the fastball/cutter usage to 40% versus rights with the same lackluster results, we'd be scolding him for getting away from what made him successful. A suggestion for success needs to be more than, "stop doing what you are doing because you are failing."
Reply to tballgame
moonlightj
The results are getting worse for him but he's going with more and more cut fastballs to righties. I'm not saying scrap it, rather, mix in something else. When your opponents start teeing off on you to this extent without a noticeable injury, something has to change. This is something I witnessed with James Shields in 2010 and it wasn't until he sat down and watched video and worked on his mechanics and sequencing in the off-season did things change for him. Sadly, Shields is falling back into some of those same predictable habits this season with that cut fastball.

The curve is a tertiary pitch for him for his career that he has thrown barely more than his two-seam fastball. Maybe this could be something better location and sequencing can improve. Here is where he is locating that cutter so far this season. If you compare those locations to the zone images in the article, they mesh up rather well. The curveball appears to be much more of a chase pitch than something he attacks the zone with.

Comparing the location of where he threw his cutters in 2010, location could indeed be more of an issue than sequencing. (all images show pitch location vs RHH). Lester seems committed to throwing the cutter in on the hands and has ignored the backdoor cutter he has thrown in the past. There is a risk with that backdoor cutter floating back out over the plate to become a flat slider, but his front door cutter isn't getting far enough in to limit hitters this season. Since he is really only throwing the pitch to a certain quadrant, I would have to imagine some predictability is in play.
Reply to moonlightj
randolph3030
Great article; nice in-depth look at an issue most are analyzing via dime-store-psychology.

I wonder if there is a way to breakout his successful at bats (i.e. K, GBs, IF Pop Ups) vs. unsuccessful ABs (HR, LDs, BB) to see if there is a discernable difference in approach. My guess would be the results would have a heavy SSS cavaet.
Reply to randolph3030
kdierman
FYI
Dustin Pedroia ripped Lester a new asshole while on the bench in between innings his last start because he was not competing. With Texas coming up Pedroia knew that Lester needed to bow his neck and suck it up to compete deep into the game to save the pen.