The running joke these days is that the Mayans may have been right when they predicted the world would end on December 21, 2012. It is not so funny when you consider Bryan LaHair is an all-star this season and Albert Pujols is not. Trevor Plouffe has 18 home runs this season, which is as many as Adrian Gonzalez, Ryan Zimmerman, and Dustin Pedroia combined.  A quick look at the shortstop leaderboard for TAv shows Jose Reyes and Troy Tulowitzki in the first two spots. Wait, that is the 2011 board. Certainly those two high-dollar players are near the top of this year’s leaderboard too, though. Let me reset the filter… there we go: Asdrubal Cabrera, Jed Lowrie, and Elliot Johnson are the top three? Is this damn thing broken? Ankrom? Pease??!! This cannot possibly be right, can it? Hot damn, it is.

Cabrera being on top is not that much of a surprise considering he had the fourth-best TAv for the position last season. Jed Lowrie has shown talent before but merely had trouble staying healthy in Boston while also struggling to find consistent playing time; neither issue has surfaced in Houston. Elliot Johnson, on the other hand, is a giant head-scratcher.  The undrafted free agent from the hotbed of baseball known as Thatcher High School in Arizona has had a surprising season for the Rays, whose hitters have mostly been fantasy disappointments in 2012.

This surprising season comes on the heels of Johnson finishing 36th in TAv for shortstops last season at .226, which is 51 points lower than his current TAv of .277. He has a higher batting average than Jimmy Rollins and Erick Aybar.  He is on base more frequently than Rollins, Aybar, Ian Desmond, and Yunel Escobar.  His slugging percentage is above that of Jose Reyes, Rafael Furcal, and Alexei Ramirez.  He has more steals than Alcides Escobar, Cliff Pennington, and Derek Jeter. All of those players went for $10 or more in expert fantasy auctions, and Elliot Johnson was drafted in none of them. How is this undrafted fantasy player doing this?

It is difficult to make any kind of definitive judgment with Johnson as he has but 405 career plate appearances in the majors, and most of them have come in a reserve capacity. He did, however, spend a significant amount of time in the minor leagues, playing parts of 10 seasons and accruing 3,735 plate appearances, including five seasons at Triple-A in which he hit .261/.325/.416 and was 68-for-85 on the basepaths.

It was only the rash of injuries that hit the Rays in May that opened up playing time for Johnson as the Rays struggled to find players to fill the 25-man roster. While we’re dealing with small sample sizes, let’s look at Johnson’s running major league totals at 50 plate appearance intervals:

His triple-slash stats and BABIP, in graphical form: 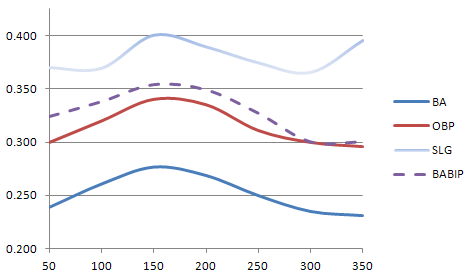 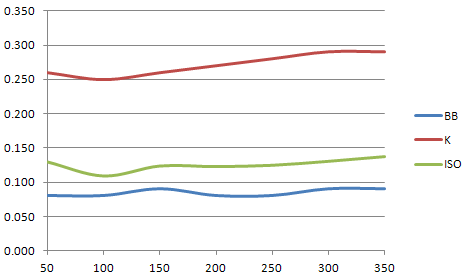 As we can see, it’s been over Johnson’s last 150-200 plate appearances that he’s really picked up steam. Yet, over his last 50 to 100 plate appearances, he seems to be returning to his previous levels that left him relegated to the bench and even designated for assignment at one point in his time with the Rays.

Still, StatCorner shows metrics for plate behaviors, and Johnson has definitely had a change in approach this season:

One of the factors holding Johnson back is his inability to hit lefties. He is listed as a switch-hitter, but the .182/.249/.265 slash line in 191 career plate appearances against lefties screams otherwise. In an ideal world, Johnson and Sean Rodriguez would become a true platoon, as Rodriguez has a career reputation of hitting lefties very well while struggling against righties. This season, Rodriguez has hit neither lefties nor righties, which has led Joe Maddon to go with the hot hand in Johnson despite the downgrade defensively.

Taking everything into account, if you are struggling at middle infield and see Johnson’s number on the free agent pile, I’d think twice before plugging him into your lineup. The overall numbers are acceptable, but he appears to be trending back toward his true talent level of a replacement level player that is best used in spots and not as a starter.  Conversely, should you already own him, this would be a great time to test the waters and see what you can get for him.

You need to be logged in to comment. Login or Subscribe
dandaman
Jason, I've been thinking about picking up Johnson for a while as I'm not thrilled with Cozart. How would you rank Johnson, Cozart and Drew (could get him off waivers), for the rest of the season?
Reply to dandaman
moonlightj
I like Cozart the best of that trio
Reply to moonlightj