In late February, Henderson Alvarez earned my blessing for fantasy sleeper. In that article, I showed what his potential could be, and his profile in the Baseball Prospectus 2012 had this to say:

The Venezuelan righty was probably the biggest gainer in an impressive year for the Blue Jays farm system. Seen prior to the season as a live arm with little to show for it, he went from High-A to the majors in less than 100 innings—even after he lost a month to injury. Alvarez sits in the mid-90s with his fastball (which has electric late movement), geneRates plenty of ground balls, and has an advanced changeup. His best start of the season was a 97-pitch, eight-inning outing against the Orioles. He allowed just three hits and no walks while recording five strikeouts and 18 ground balls. He’ll be slotted into the back end of the rotation next year, but his ceiling is considerably higher than that.

Needless to say, I would like to revoke my vote after watching Alvarez have yet another disappointing start last night. He even joined in on the pain train that Toronto has suffered through recently, leaving the game in the sixth inning with soreness in his pitching elbow. Frankly, I am surprised the soreness is not in his neck from whiplash after giving up six hits, including his 17th home run of the season in just 95 innings of work.  To say that his 2012 season has been a disappointment would be a tremendous understatement. His strikeout rate now sits at an even 3.0, and while his walk rate is a strong 2.0, his home run rate is nearly as high at 1.6 on the season. That kind of home run rate is not what we typically associate with a pitcher that has a 58 percent groundball rate.

To show you how rare this kind of home run charity is for an extreme groundball pitcher is, there have been 176 pitchers who have thrown at least 90 innings in a single season with a groundball rate of at least 55 percent from 2003 to 2011. Among these pitchers, Alvarez shows up with the second-worst HR/9 and the first pitcher since Mark Mulder in 2006 to post such a HR/9 while inducing so many groundballs.  (Of course, there is some bias here as most pitchers who would make this list at the 90-inning mark had been receiving some bad luck, which evened out as the season wore on—something Alvarez hasn’t had the luxury of yet—bumping them further down the list.)

Stuff wise, Alvarez is throwing as hard as he did last season. His BrooksBaseball card shows that his velocity has been much like it was in 2011:

Even last night, the velocity was strong; Alvarez had an average velocity of 93.43 on his four-seamer before going down with the sore elbow. Velocity is not his problem, but the location of his pitches certainly has been. The pitch plot below, via joelefkowitz.com, shows where Alvarez’s pitches that have resulted in home runs this season have been located: 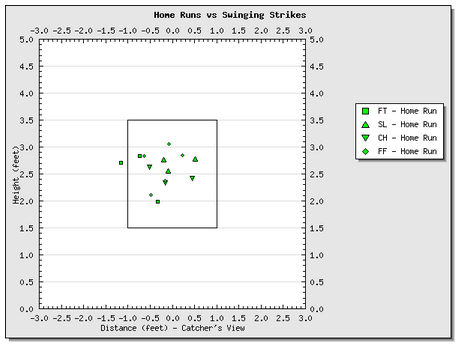 Aside from the two lower  pitches, most of Alvarez’s damage has been self-inflicted, coming on elevated sliders and changeups that have been deposited in the bleachers.  Texasleaguers.com shows where Alvarez has located all of his pitches in 2012 compared to 2011:

The sore elbow may already render talk of Alvarez’s bounce-back chances moot if he travels down the same road others on the staff before him have this season. As it stands, his strikeout rate alone makes him unrosterable in a 5×5 league unless your team is already loaded with strikeout artists, but he still holds some value in a 4×4 league because, despite the home run issues, his season ERA is 4.36 and his WHIP is 1.37. Both ratios could improve in the future with better pitch location that maximizes the strength of his sinking fastball.

You need to be logged in to comment. Login or Subscribe
hessshaun
I am glad that you like to look at spreadsheets. Well done.
Reply to hessshaun
rawagman
The mark against Alvarez has always been his breaking ball. When he came up, everyone said that he had a very hard sinker and a plus changeup, but his slider was fringy at best.

Looking at his pitch charts from the past two seasons, it seems that he has thrown his slider more often this year than last. And the results have not been favourable. (yes, I am a Canadian).

I think he would be best served by reducing his reliance on his slider to maybe 2-strike counts when he can throw it out of the zone for better effect, but that's just me.
Reply to rawagman