It is already bad enough for Cubs fans that they have the second-worst record in all of baseball and are tied with the Padres for the lowest win total in the league. To add salt to the wound, Carlos Zambrano appears to once again be a relevant pitcher.

Fantasy owners were very skeptical of any kind of success for him in 2012. Dean Peterson paid $3 for him in Tout Wars NL.  Steve Gardner paid the same price for him in LABR NL, while yours truly made a $2 purchase of him in a 10-team local NL-only league. This was coming off a season in which Zambrano failed to crack the 150-inning mark for a second consecutive season and saw his strikeout rate plunge from 8.1 to 6.2 while his home run rate more than doubled from 0.49 to 1.17.

There has been a slight skills change in that he is throwing more groundballs this season than he has since his best years with the Cubs. His walk rate is identical to last season while his strikeout rate is not that much better. His batting average on balls in play is considerably lower than his career .275 rate and is a career best by 16 points. He is also stranding more runners so far this season, though with a career rate of 74 percent, that could begin to normalize.  Despite what was said in the off-season, he is doing this without any increase in velocity.

Before the season started, Zambrano was quoted as saying:

"Last year, I was throwing 91-92 [mph]," he said. "In winter ball, I was throwing the ball 94-95, which is good." The difference is the result of him changing his training regimen. "I've been working out with my personal trainer," he said. "It's helped me out a lot. I feel looser."

Zambrano does indeed look more fit this season than he did in Chicago, but he is still barely throwing 91. The table below shows Zambrano’s pitch mix and the average velocity on those pitches over the past two seasons, according to his BrooksBaseball player card: 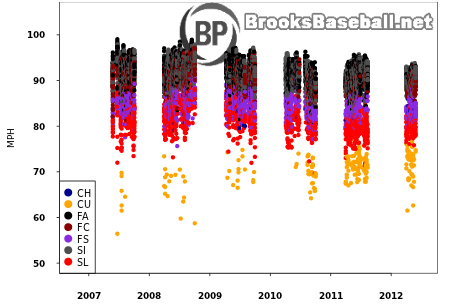 He has also adjusted his release points on the mound, making a slight shift on the pitching rubber and appearing to be more consistent in using a lower arm slot this season. 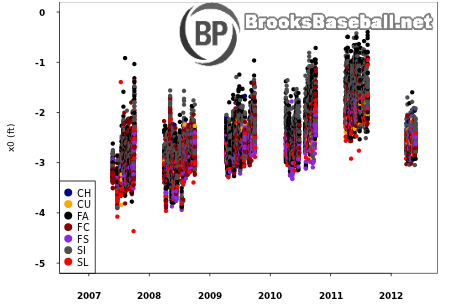 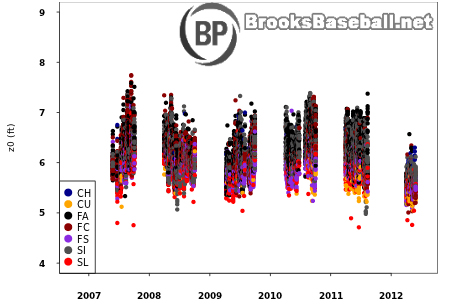 Seventy-six percent of the pitches Zambrano has thrown in 2012 have been sinkers, cutters, or split-finger fastballs. That helps explain the increased groundball rate this season, which is a bit ironic considering he moved from the not-so-friendly pitching confines of Wrigley Field to a much more forgivingly spacious indoor ballpark in Miami.

The results from Carlos Zambrano are better, but this is not due to any rediscovered velocity. He has become a crafty veteran who realizes his days of dominating with a fastball are over, throwing everything but the kitchen sink at batters while relying more on movement than velocity to get results.  His BABIP is 43 points lower than any other starting pitcher on the Miami staff this season, though, so some adjustment is in order.  He has won four of his last six decisions for fantasy owners, though,  and outside of an ugly outing against Colorado, he has been rather effective for most of the season.

Zambrano currently has four wins, a 2.81 ERA, and a 1.11 WHIP.  Simply put, it is an opportune time for you to cash in your profits and see if you can use Zambrano to plug another hole on your roster.

You need to be logged in to comment. Login or Subscribe
Oleoay
While I like the analysis, it's still early in the season and with Zambrano's history of dehydration and muscle cramps, I'm not hopeful he'll keep this level of performance or remain healthy in the hot/humid Florida sun.
Reply to Oleoay
jrbdmb
Which makes it fortunate that Zambrano is pitching his home innings in the retractable roof Marlins Park.
Reply to jrbdmb
Oleoay
You realize humidity involves the water density in the air and air goes around roofs, right? Or are you suggesting the roof forms a 100% seal when it closes? Oh wait, the roof also leaks. (http://www.miamiherald.com/2012/05/02/2777691/miami-marlins-working-to-plug.html) Also, from the wiki page "Separate retractable glass panels offer uninterrupted views of the downtown Miami skyline, and also allow in a natural breeze when they are open."
Reply to Oleoay
jrbdmb
The Wiki page also notes: "A mammoth air-conditioning system will cool the average temperature to a comfortable 75 Â°F (24 Â°C) with the roof and glass panels closed. The Marlins expect for the roof to be closed for about 70 of the 81 home games and likely to remain open on some dry nights in April, when the weather isnâ€™t too hot." His durability over a long season may be a concern, but the climate of Miami shouldn't be.
Reply to jrbdmb
Oleoay
I read that, but it wasn't clear to me whether that 75 degrees is in the stands or at field level nor whether the air conditioning controlled for humidity or not.
Reply to Oleoay
NYYanks826
I think you're reading far, far too much into this, Richard. The reality is, it's going to be significantly more comfortable when the roof is closed (whether or not it is 75 degrees at field level) than it would be if he were pitching outdoors in the sweltering summer heat of Miami or even Chicago.
Reply to NYYanks826
Oleoay
Well, that took long. Lower back stiffness. http://scores.espn.go.com/mlb/recap?gameId=320609128
Reply to Oleoay
moonlightj
That was more like whiplash last night than back stiffness :)
Reply to moonlightj