keyboard_arrow_uptop
Subscribe to Baseball Prospectus
During my chat with BP readers last week, there were a number of questions right out of the gate from panicking Tim Lincecum owners and, on the other side of the coin, owners wondering whether they should take advantage of their league’s panicking Lincecum owner.  I gave a brief response, but I wanted to go into more detail today for those who asked during the chat and for those who didn’t have a chance to stop by.
There seem to be two concerns with Lincecum right now: 1) his ERA is an absurd 12.91, and 2) his average fastball velocity is down 2 mph from 2011.  In regard to the former, Lincecum is posting phenomenal peripherals (he’s striking out nearly 12 batters per nine) and has an xFIP of 2.69, so that ERA will come down.  It’s been only two starts, after all.  The second concern is legitimate, though, especially since that sort of thing could cause his strikeouts to drop and his xFIP to rise (and, subsequently, his ERA to remain worse than preseason expectations).
Last April, shortly before joining Baseball Prospectus, I noticed that Colby Lewis had seen diminished velocity over his first few starts, and I studied (over at The Hardball Times) what this could mean for him.  Given that Lincecum is now in the same boat, much of this is still applicable.
Last year, I found that a pitcher’s velocity explains roughly 20 percent of the variation in his strikeout rate.  Right off the bat, this tells us that while velocity is important, it is certainly not the be-all-end-all of pitcher success.  This is especially true for a pitcher with the deep repertoire of Lincecum, who has plenty of ways to fool a batter.  Lincecum, in fact, throws his four-seamer just one-third of the time, complementing it with a two-seamer, change-up, slider, and curve.  Of course, part of what makes an off-speed pitch effective is the quality of the fastball the pitcher plays it off of, but despite losing velocity, Lincecum’s stuff is still excellent and should help lessen the blow to the heater.
That said, the Freak’s velocity drop-off may be more worrisome than Colby Lewis’ was.  While Lewis’ decline came out of nowhere and was easier to chalk up to a small sample size—thus making regression likely—Lincecum’s velocity was a problem for him last year as well.  As 2011 wore on, Lincecum’s velocity steadily declined from near 93 mph at the start of the year to less than 90 mph by his final start of the season.  As you can see in the chart below, that velocity hasn’t rebounded at all to start 2012: 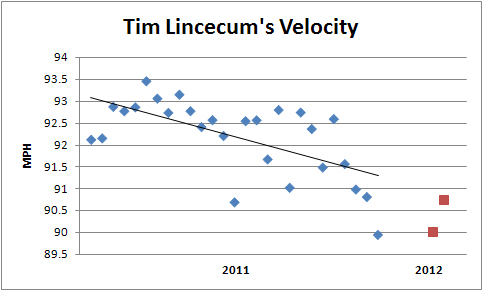 Given that this was a preexisting problem that wasn’t corrected over the off-season, expecting the type of bounce back we expected for (and saw from) Lewis might not be prudent for Lincecum owners.
Of course, there are still sample-size issues to consider and the possibility that the radar guns in Arizona and Colorado (where Lincecum made his starts) were running cold (as amazing as PITCHf/x is, it’s not 100 percent perfect), but being that he’s already pitched in two separate parks and had the same issues last year, this seems legitimate.
All told, I wouldn’t be panicking if I were a Lincecum owner.  He’s run into a lot of bad luck to this point, and while the velocity drop-off is a bit worrisome, it’s not something that should be damning for him.  He has always been a good pitcher, he knows how to attack batters, and he has a lot of different weapons to do just that.  At this point, he may fall down my starting-pitcher rankings by a few slots, but he’s not a guy I’m looking to sell while I can still get something.  I expect him to be quite good going forward.  In fact, if you happen across an owner who is trying to dump him, I’d look into buying him if he comes for the price of a top-15 or top-20 pitcher instead of a top-10 guy.

When you've got a WHIP of 2.22, the K per 9 stat isn't exactly telling,you are seeing over 5.2 batters per inning. Lacking the ability to get anyone out EXCEPT by strikeout, is hardly a compelling stat.

Here's what you SHOULD have said: "Lincecums K% are declining, but not that drastically, I'd expect bounceback to 2011 levels..."

Actually it's both. His fastball location has never been Halladay or Lee like but it had the life and velocity to make batters miss or foul it off for a strike. Now that the velocity has dipped that lack of fine location is leading to the FB getting pounded.
Reply to kcheaden
derekcarty
Yes, I agree that K% is a better indicator of strikeout skill than K/9. I still primarily use K/9 in writing for the sake of familiarity for readers, especially when it tells the same story (in this case, that Lincecum is still striking out batters).

That said "Lacking the ability to get anyone out EXCEPT by strikeout" is not something to worry about over a two game sample unless you have other information to work with. A pitcher's hits allowed on balls in play (i.e. when he's not striking batters out) over two games, from a purely statistical standpoint, is almost completely meaningless.
Reply to derekcarty
furman82
My concern with Lincecum is the announcement that he's looking to no longer throw the slider (which he threw roughly 16% of the time last year) to reduce the chance of injury to his elbow. This news, coupled with the declining velocity, has me bearish on him. I wonder if he is already injured...
Reply to furman82
derekcarty
True, although I believe he just said he wouldn't throw it much in the early going and could bring it back later on. Additionally, he threw the pitch less than 10 percent of the time from 2007-2010, only really relying on it last year at 27 percent. I can see where we might worry that this signals some sort of injury, but Timmy and the Giants have said it doesn't, and I'd have to hope that if he was hurt he wouldn't try to pitch through it.
Reply to derekcarty
derekcarty
So it appears Lincecum is already breaking the slider back out, throwing quite a few in last night's start. Good sign.
Reply to derekcarty
Robotey
Well researched and somewhat re assuring, however, I'm a little PO'd at the Depth Charts, cause I had to choose between keeping Timmy at $26 and Greinke at the same price and I went with the former strictly based on the Depth chart numbers.
Reply to Robotey
derekcarty
Robotey,
I'm not sure why you're PO'd. Could you elaborate? Lincecum over Greinke was the right choice preseason, unless there is something else going on here that I'm not understanding.

Thanks!
Reply to derekcarty
bartelsjason
The Freak is clearly pitching "to not get get hurt" until he receives an extension. He knows that everyone always is worrying about his size and delivery, so he is more worried about staying healthy and getting paid than pitching to win. Ironically, this is worse than getting injured for him. His deciding nit to throw the slider is blatant insight to what his primary goal is right now. All of this messing with his head and his performance. Money f's you up.
Reply to bartelsjason