To have owned B.J. Upton in fantasy baseball is to have both loved him and loathed him. Consistency has never been a strong suit for Upton as both his career statistics and monthly statistics have taken fantasy owner on a wild roller-coaster ride since the start of the 2007 season.

That 2007 season was an enjoyable one for fantasy owners; Upton went 20/20 and hit .300 in his rookie season. Since then, he has repeated the 20/20 effort, but his batting average has never come close to what it was in his rookie campaign despite the fact that he struggled just as much with consistent contact five years ago as he does today.  In fact, in the 34 months of Upton’s career, he has hit above .260 in just 14 of them. In that first month of 2007, he hit .365 and has hit over .300 in just five months of his entire career while hitting below .225 seven different times. His all-time low was in April of 2009 when he hit .177 after undergoing off-season shoulder surgery on his non-throwing arm.

Despite his issues with making contact and hitting for average, Upton has rarely had a problem reaching base via the walk.  He has had a walk rate of 10 percent or greater in 23 different months of his career, six times posting a rate north of 15 percent. Most of his single-digit walk rates came earlier in his career, and the only month in which he has had a single-digit walk rate over the past two seasons was this past June when he posted an eight percent rate.  Despite the strong walk rates, however, Upton has only met or exceeded a .350 on base percentage 12 times in his career, and only one of those has occurred since 2009. When he reaches first, he is a threat to move himself into scoring position at any time and has been quite successful under Joe Maddon’s self-governing approach to the running game, yet Upton has scored as many as 20 runs in a single month just five times in his career.

Only twice in his career has Upton been shut out on the basepaths in a single month—August of 2004 and July of 2007. Eleven different times, Upton has stolen as many as eight bases in a single month with his career high coming in June of 2009 when he stole 14 bases during arguably his best month of fantasy production ever. In that month, he also hit .324, hit five home runs, and drove in 22 runs while scoring 20 times.

Upton’s power has come and gone throughout his career with the shoulder injury affecting him for good portions of the 2008 and 2009 seasons. In 19 of his 34 playing months, Upton has hit two or fewer home runs while hitting as many as five in a single month eight times. Maddon has hit Upton all over the lineup throughout his career, which has wreaked havoc on his RBI totals. He has had double-digit RBI totals in exactly half of his playing months but also had nine different months in which he drove in five or fewer runs over his first three seasons.

If we look at OPS, we find only 14 months in which Upton has had an OPS of a least .800 and only four in which he exceeded .900. The best news here is that one of those months came at the close of last season, when Upton hit .333/.431/.606 with five home runs, 21 runs scored, 20 driven in, and nine steals.  The immediate reaction would be to dismiss these because big months are not unusual for Upton, nor are terribly disappointing months.  This big September compares well to his huge April 2007 in which his batting average on balls in play was a stunning .524 (this past September, he posted a .431 BABIP). To show just how fortunate Upton was in April of 2007, he had a 0.22 BB/K rate and struck out in 36 percent of his plate appearances. Compare that to this past September when Upton had an 0.59 BB/K and struck out in 29 percent of his plate appearances while walking in 15 percent of them.  In the past, when Upton’s walk rate has been at its highest, his batting average has been at its lowest, as evidenced by averages of .177, .203, .244, and .245 in months where his walk rate was at least 14 percent.

Upton went for $30 in the CBS-sponsored AL-only expert auction last week, while I paid $28 for him in the AL LABR draft this past weekend. The bad news? In single-league formats, Upton has never earned that much in a season. So why is he going for $28-$30? Some may be looking at three reasons for going big on Upton: 1) He is in a contract year, 2) He is turning 27, and 3) He had a big September.

That first issue is tricky, but Baseball Prospectus alumni Gary Huckaby and Dayn Perry have both covered this subject in the past. Huckaby reviewed the data in 2003, Perry covered it in the Baseball Between the Numbers book of 2006, and several others have reviewed the proposal as well. Perry’s numbers in particular showed that players do somewhat better in their contract year than they do in the previous two seasons.  Upton is coming off back-to-back seasons of low-to-mid $20 values, so a minimal increase could put him back in the high $20 dollar range where he was earlier in his career. He could also be one of the many contract year players who have actually done worse in that final year, like Derek Jeter and Jimmy Rollins in past seasons.

Before getting too excited about the minimal uptick in production, consider that Nate Silver’s research on the aging curve pretty much negates this. His work showed a peak somewhere between ages 26 and 27, but that peak comes earlier for center fielders. 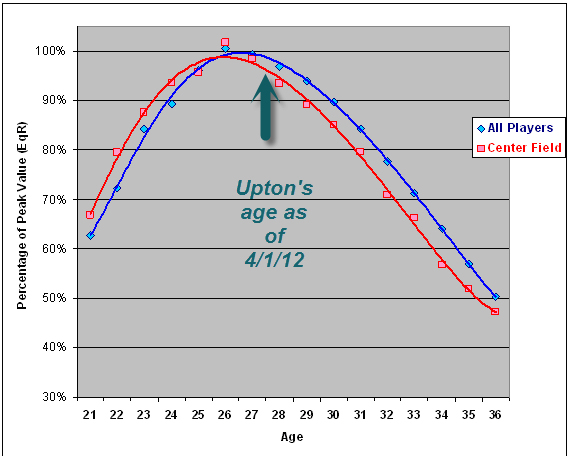 It is possible that we have already seen Upton’s best offensive years, in which case the $28 and $30 investments have little chance of returning any kind of profit. The odds are certainly not in Upton’s favor, but at least there are examples of players bucking the trend; Curtis Granderson is the most recent example of someone blowing the bell curve for the rest of the group.

Upton also made some slight changes to his swing throughout last season. Examine the images below that were taken in July, August, and September of this past season.

It is subtle, but Upton lowered the place where he starts his hands and crouched a bit more compared to a more upright stance in July. Along with that change came a more pronounced timing mechanism where he lifted his front foot further off the ground and then went into the toe tap habit he has shown for most of his career, as shown in the animated gif below.

The numbers in September were Upton’s best in the final month of the season by a significant margin. Before that, his highest OPS in the season’s final month had been .827, and he had only topped .800 one time (2008). Was it all simply from an inflated BABIP, or was the slight change in his hitting process and the improved results a harbinger of what is to come in 2012? The early bids for Upton in expert leagues speak to how Upton is being viewed and the shallowness of the American League outfield talent pool.

You need to be logged in to comment. Login or Subscribe
twayda
Off topic. But was just wondering if you were planning on doing the closer matrix again this year? Loved it last year.
Reply to twayda
moonlightj
Yes - was planning on it for next week
Reply to moonlightj
twayda
Awesome... Excellent article too.
Reply to twayda
moonlightj
Just noticed I gave Derek the wrong animated gif for the swing. I have a longer one that shows 3 examples in sequential order that better highlights the changes and I've sent it in to him to swap out.
Reply to moonlightj
derekcarty
Swapped it out.
Reply to derekcarty
Dodger300
Can you explain how using stats month-by-month has any distinct validity? It doesn't seem long enough to overcome small sample size issues.

Correct me if I am wrong, but using the cycle of the moon, plus or minus a couple days, just seems like a completely arbitrary unit of measure.

Reply to Dodger300
moonlightj
Distinct validitity was never portrayed as that kind of sample size is a fool's play. If you have followed Upton throughout his career, you know how terribly inconsistent he can be as he falls into deep slumps. The big September caused me to look at how it compared to other big months to see what he did differently as well as review a few hours worth of video to look at anything different in his approach at the plate.

Results wise, he made more contact and was more patient at the plate than in previous big months and there was a noticeable change in his swing from the lowering of his starting point for his hands as well as a bigger raising of his front foot than he has used in the past.

I was simply showing that a change in process had more to do with his change in results than it has in the past. He could be the next in line with guys like Bautista, Zobrist, and Morse who have each teased breakout seasons in the previous September or he could just go back to bring the same old fantasy headache. We shall see
Reply to moonlightj