The other day, I was asked for a late-round sleeper in AL-only leagues, and I replied with Henderson Alvarez. Sure, he’s slight of build and barely old enough to drink, but color me interested despite what PECOTA has to say about him.

Here is his player profile from the Baseball Prospectus 2012:

The Venezuelan righty was probably the biggest gainer in an impressive year for the Blue Jays farm system. Seen prior to the season as a live arm with little to show for it, he went from High-A to the majors in less than 100 innings—even after he lost a month to injury. Alvarez sits in the mid-90s with his fastball (which has electric late movement), geneRates plenty of ground balls, and has an advanced changeup. His best start of the season was a 97-pitch, eight-inning outing against the Orioles. He allowed just three hits and no walks while recording five strikeouts and 18 ground balls. He’ll be slotted into the back end of the rotation next year, but his ceiling is considerably higher than that.

The write-up is certainly brighter than PECOTA projections for the young hurler, as seen in the table below:

In his simplest form, Alvarez is a groundball-heavy pitcher that does not miss a lot of bats, so he is at the mercy of his team defense. Looking at our Team Defensive Efficiency ratings from last season, Toronto was in the middle of the pack for both its standard and park-adjusted defensive efficiency. Scan across how batters performed against Alvarez during his time in the majors last season shows us a pitcher who was a little above league average.

The two skills Alvarez has going for him is that he pounds the strike zone and induces a ton of groundballs.  We know from his player card that he has never had a groundball Rate lower than 52 percent in his career, and only once has his walk Rate exceeded 2.0 walks per nine innings.

Last season in 63 innings of work, Alvarez gave up eight home runs, which equated to a 15 percent HR/FB and subsequent 1.1 HR/9 Rate. Given that he pitches in a park that can play like a pinball machine and in a division loaded with power hitters, one certainly has every right to be timid about drafting someone who works in the zone so frequently and will get his mistake pitches crushed. We can call this condition PTSOOKSD:  Post Traumatic Stress Of Owning Kevin Slowey Disorder.

Digging through the BP stat box, I found 205 pitchers similar to Alvarez in skills who threw at least 160 innings in a season with groundball Rates of at least 50 percent, strikeout Rates below 6.0, and walk Rates below 2.3. How did they break out per scoring category?

Wins: 83 percent of them were able to win at least 10 games that season.

Ten wins, a sub-4.00 ERA, and a sub 1.30 WHIP would be a solid return for an end-game investment. It would be nice to have more than 205 pitchers to use in our sample, but digging back as deep as possible into the database still only resulted in 312 pitchers that met the arbitrary end points used here, and that sample pool dug back into the 1950s when the game was a bit different.

As far as splits go, Alvarez’s player card shows the following splits at the major league level, which differ a bit from what he did in the minors. 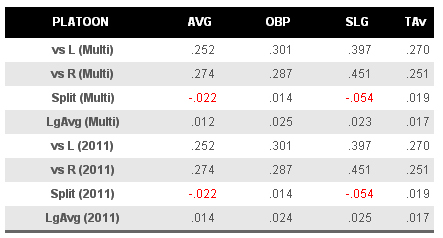 Compare those splits to what he did at the minor league level:

Lefties were easier for him to keep off base in Toronto last season, but he was historically much tougher on right-handed batters throughout his minor league career. Given how much random variation platoon splits can have, it doesn’t seem like we should worry much.

If Alvarez’s groundball rate was not as high as it was, I would likely join the rest of you with PTSOOKSD, having owned Slowey on several teams throughout the years. I feel Alvarez’s ability to pound the strike zone and limit the free passes will reduce his risk, though. Toronto may not have the best infield defense and the AL East is certainly not forgiving of pitchers that make mistakes, but the odds are in favor of Alvarez offering a positive return on investment on an end game draft day investment.

You need to be logged in to comment. Login or Subscribe
jintman
Shhhhhhh!
Reply to jintman
moonlightj
I'm told he went for more than Gavin Floyd in an expert auction today
Reply to moonlightj
kdierman
Great article/research ....thanks for helping me fill in some blanks here because I saw him excel last year with the dipping diving movement ....then saw the pecota card ... Maybe can get Trevor Cahill like numbers ....would love to own both Gavin and HA in an AL only league as 3/4 starters.
Reply to kdierman