Twenty-seven. Oh, the age of 27. As you might be aware, age 27 gets a lot of attention in fantasy baseball circles, often cited as a “magic” number when a hitter reaches his physical peak and is most likely to break out. It doesn’t take much effort to stumble upon a fantasy writer who discusses this theory, heralding the upcoming season’s crop of age-27ers.

The theory goes that because a player is reaching his physical peak, he is most likely to have a career year during his age-27 season. Unfortunately, most of the support offered for this theory comes in the form of conjecture or anecdotal evidence. I wrote an article last offseason at THT that examined whether age 27 actually is the prime age for breakouts. Unsurprisingly, I found that it wasn’t. Of course, this won’t stop people from continuing to write about it, as they see a player like Rickie Weeks post a 29-home run season in 2010 at the age of 27 and assume that the age is somehow magical. But these people ignore the age-27 players who stumble, such as Adam Lind in 2010, and the players who break out at other ages, such as Jose Bautista at age 29. Anecdotal evidence is never sufficient and can often lead to season-sinking assumptions.

One of the largest causes of this age-27 fallacy, from what I can tell, is the assumed interchangeability of the words “peak” and “breakout.” While both are positive words to hear about a baseball player, they mean very different things. A player’s “peak” is the time when he is in the best shape of his life, which we expect to translate into the best season of his career. A “breakout” is when a player posts better numbers than we expected, independent of physical condition or whether his season is superior to any other the player has or will post.

It’s not incorrect to say that a player’s peak year is generally his age-27 season (there’s some debate about the exact age, but for the sake of simplicity, we’ll say it’s 27). Of course, everyone’s physiology is different, and some will peak at 26 or 28 or 31, but assuming for a moment that the average player peaks at 27, that does not necessarily mean that he’s in store for a breakout at age 27. Take a look at the age curve below, which was developed by Mitchel Lichtman (aka MGL) and posted at The Hardball Times in 2009. 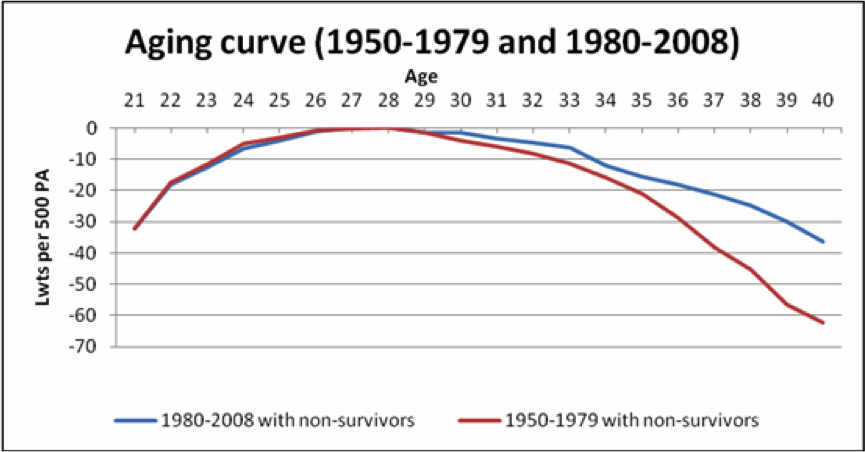 While a player may expected to post his “peak” season around age 27, you can see that the expected gain from his age-26 season is actually quite small. In fact, the age-26 to age-27 jump is the smallest of all age-to-age improvements. If a player only receives maybe a two percent boost in his age-27 season but perhaps an eight percent boost in his age-22 season, why do we think that a player will break out at age 27? When we take a “breakout” to mean a big improvement over previously established levels, it seems downright silly to expect a breakout to occur at the age when players traditionally improve the least.

So while a player may post his best season at age 27, that shouldn’t matter to us if we know what he did in his age-26 season. His improvement at age 27 will be incremental. Yeah, he’ll be at his “peak,” but he was very, very close to his peak last year! If we’re really looking for a player who’s going to “break out,” we’d be wiser to identify quality younger players, who see much larger age-to-age increases in performance. Of course, we have to deal with smaller samples of past performance data with younger players (making it more difficult to say how good they are to begin with), plus all of the prospect hype that tends to inflate their market value, but they’re going to be better bets for big gains than older players are, even when those older players are reaching their peak.

You’re sure to hear a lot of talk over the next couple of months about age-27 players who are ready to explode, but it seems unwise to hope for 2012 breakouts from guys like Brennan Boesch, B.J. Upton, or Drew Stubbs based merely on the fact that they’ll be 27 this season. It might be wiser to focus on younger guys who made their debuts at a young age. With these players, we will have at least a couple of years of major-league data to look at, the prospect hype will have calmed down, and they’ll still be on the most favorable portion of the age curve. Player who might fit that bill this year included Elvis Andrus, Starlin Castro, Jason Heyward, Logan Morrison, Mike Stanton, Jose Tabata, Ruben Tejada, and Justin Upton. That’s not to say that age should be the only thing you take into account when trying to find a breakout, but logic suggests that a young player is a better bet for one than a guy who’s turning 27.

You need to be logged in to comment. Login or Subscribe
mattseward
Derek, very good article as the age 27 thing always annoys me every year. There's just so little evidence to back it up and yet people go crazy for it.

I think the best way to get breakout guys is to look at players, who historically underperformed their norms and buy low on them. This approach would have yielded James Shields and Lance Berkman for instance at minimal cost.

One thing I would say is there is strong evidence Jose Tabata is at least 3 years older than his given age so perhaps its best to temper expectations on him given pretty much the entire hype on him is being young for his league...
Reply to mattseward
derekcarty
Thanks, Matt. I'm exactly the same with the Age 27 stuff :)

I think that approach will often lead to breakouts. Regression the mean is a powerful thing. In really competitive leagues it's hard to get certain guys like that at a bargain, but they're usually prime rebound candidates.

As to Tabata, yes, there is certainly a concern that his reported age may not be accurate, so that needs to be taken into consideration.
Reply to derekcarty
Gep7Llaro
Off-topic but what did you contribute to the Fantasy resources coming out Wednesday?
Reply to Gep7Llaro
derekcarty
Not much. I'll be the lead on the depth charts this season, as far as I know now, but I'm not the one who put the initial depth charts together. The majority of the credit for PECOTA and PFM goes to Colin Wyers, Rob McQuown, and Ben Murphy.
Reply to derekcarty
hessshaun
I don't hate the peak 27 year old as much as I hate the "Contract Year" fallacy.

Reply to hessshaun
gjhardy
I'm not a math guy, but I'm curious if this graph is based on MLB numbers only or if it takes minor league performance into account as well. If it's just MLB numbers, there are very few 21-year-old players who play regularly in MLB and therefore have the ability to post a peak year at that age, right? I wonder if this graph also might reflect the overall age distribution of MLBers, and it turns out that more players peak at age 27 simply because there are always more 27-year-olds in MLB than there are 21-year-olds or 37-year-olds. A self-fulfilling prophecy?
Reply to gjhardy
tcfatone
I wonder if one could make a similar graph based not on age, but on years in the bigs. Is the biggest jump in the 2nd year in the bigs? 3rd? 4th? And then cross-index both graphs? Age-related and experience related?
Reply to tcfatone
derekcarty
That would be interesting to see. Maybe I'll try to do this for an upcoming article.
Reply to derekcarty
derekcarty
All that data is in MGL's article, but minor league numbers are not included. You're right that there are relatively few 21-year-olds who make it to the bigs, but the number of players at each age shouldn't affect the curve too much, especially since MGL took some measures to account for survivor bias (though it's possible there's a small amount of selection bias present on the younger portion of the curve). MGL said in the comments that he doesn't believe including MLEs would make it that much more accurate, and including them would definite present some problems of its own. Additionally, the curve is taking age averages, not totals into account, so even if there are more 27 years old playing and, therefor, breaking out than 35 year olds, it won't matter since the rate is what's being considered, not the raw totals.
Reply to derekcarty
Bellis
I'd be a lot more interested in seeing a study of "breakouts" versus service time rather than age. Are you aware of any studies that look at the breakout percentage of players in their first, second, third and fourth complete years? Experience at the MLB level seems like it might be more predictive than physiological age.
Reply to Bellis
derekcarty
tommybones made a similar suggestion. This is something I'll probably take a crack at sometime soon.
Reply to derekcarty
cdgarosi
So, the important data point is the slope (from year to year)? That makes sense because as fantasy players, we are only interested in the value of the player this year compared to the prior year(s).

Since this is a fantasy column, it would be interesting to see how each category (HR, R, RBIs, and SBs) changes by year. Perhaps there is too much to control for (lineup, park effects, etc.) for it to be useful, but it might be worth a stab.
Reply to cdgarosi
derekcarty
Yes, the slope is what's important for exactly the reason you said. Maybe the guy is about to have his best year, but if it's just 2 percent better than last year, that information doesn't do us any good. We know what kind of player he is, and he's going to stay roughly the same.

As far as individual categories go, they definitely have different-looking curves and different-looking peaks. Speed, for example, peaks quite early, IIRC. PECOTA does its aging curves by component.
Reply to derekcarty
CongoHammer
Does this mean there still may be hope for Travis Snider? He's still really young, but I don't know where the power went.
Reply to CongoHammer
derekcarty
Indeed there might be. He just turned 24 this week.
Reply to derekcarty
yadenr
26 is the new 27! I remember some component curves from years ago and speed peaked earliest, BB rate latest, with HR in between, IIRC. Also pitchers, especially K rate, peaked pretty early as well, and maybe had a flatter curve.
Reply to yadenr
Villaltac
I thought the article was spot on. Being a bit of a fantasy baseball nut I have always assumed that this "27" age bump was somewhat overstated in the community; therefore I would always tend to draft younger players that would make the aforementioned biggest jump in an unexpected time to gain the most value for my auction dollar... This article is revealing too much to my competitors and I hope they don't subscribe. Great Job!
Reply to Villaltac
hyprvypr
It's basically 25-30 for the average 'good' player I'd say.
Reply to hyprvypr