The easiest way to discern real baseball from fantasy baseball analysis is the mention of batting average as something of merit. Here in the fantasy baseball corner of Baseball Prospectus, we have to talk about batting average because it one of the five scoring categories in the most popular format of fantasy baseball. In this realm, empty batting averages are not a bad thing, depending on the position, while someone hitting .230 is more appreciated if they are still regularly driving in runs via the long ball.

If we are looking for one-trick pony roster-fillers, it is easy to comb through the batting average category and find someone like Jeff Keppinger to plug into a spot. But what if we want to look at everything else a hitter does outside of batting average? We have several metrics at our disposal to do this, but one of my personal favorites is Secondary Average (SecA) because of its simplicity to both compute and explain.

Bill James created Secondary Average in 1986 by taking a batter’s total bases, subtracting hits and times caught stealing, adding walks and stolen bases, and dividing by a player’s at bats. It doesn’t concern itself with hits batsman, double plays, sacrifice flies, and the like, so it is both easy to find online or set up in your own spreadsheet if one wants to track the statistic. A great recent example of this statistic surrounds the recent signing of Carlos Pena by the Rays. Some could not get over the fact that the team was willing to pay $7.25 million to a player that hit .225 last season. Yet, Pena’s .442 SecA was the fourth-highest in baseball last season, trailing only Jose Bautista, Curtis Granderson, and Prince Fielder. While Pena does not hit for even a decent batting average these days, he is still a productive player and one that helps fantasy players in the power categories, as well as runs scored, due to his ability to get on base at a high rate.

How does SecA translate to fantasy success? Overall, the correlation coefficient between SecA and fantasy value has been 0.50 for players with at least 502 plate appearances in a year over the past three seasons (with a sample size of 451 player seasons). 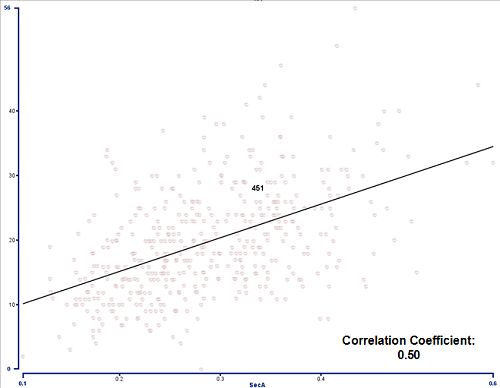 Consistency in SecA is as wild as it is for a player’s batting average, making it a bit problematic when using it as a predictive tool. Consider that Aaron Hill saw his batting average drop 81 points from 2009 to 2010 while his SecA has dropped 76 points from 2009 to 2011. Adam Jones has hit between .277 and .284 the last three seasons, but his SecA has varied from .198 to .268 during that time. Volatility does not discriminate, as even the almighty Albert Pujols has seen his SecA drop .194 points from .555 in 2009 to .361 this past season.

If we break down our group of 451 player seasons from the graph above into smaller chunks, we begin to see how the correlation between SecA and fantasy value breaks down.

For those sub-.200 players, their value mainly hinges upon one or two categories. For example, despite a .189 SecA, Ichiro Suzuki earned $34 in 2009 thanks to his 26 steals and a .352 average. If that one mega-category goes away, though, the player could be in trouble. Scott Podsednik, for example, hasn’t had a plate appearance in the major leagues since ending 2010 with a $27 value. A foot problem hurt him out of the gate this past season, which hampered his ability to steal a base, leaving a guy that had hit .304 and .297 in consecutive seasons with a sudden inability to be productive even at Triple-A. It is not all speedsters in this area, though, as Alex Rios hit just .227 last season, but his SecA was even worse at .181 as he went from earning $31 the previous season (with a .275 SecA) to just $8 last season.

Obviously, the goal in fantasy baseball is to acquire the most overall production possible, so suggesting you target players with SecA’s .400 or greater is kind of a common sense suggestion. Know that over the past three seasons, only one player has produced a single-digit dollar value while posting a SecA of .400 or greater, and that was Mark Reynolds in 2010, who earned just $8 as he hit .198 with a .407 SecA. That came following a season in which he earned $30 hitting .260 with a .441 SecA.

Am I correct in thinking that SecA may be more predictive of player value in leagues that employ OPS as a category?

Furthermore, in H2H leagues, could SecA be a bit more meaningful? For example, I want to win 8 out of 12 categories per week. It doesn't matter where the wins come from (so a crappy BA doesn't mean much if you are stellar in other areas). SecA seems to be a far more helpful measure of a player's overall contributions to your team in H2H than roto. Guys like Keppinger have their uses but the empty BA in a H2H league isn't all that useful (although it can be greatly helpful in roto).


Reply to JoshC77
moonlightj
Thanks. I would think it would be helpful in OPS leagues because it would show those guys who get on base as well as those who make the most of it.

I use the stat more as one of those tiebreakers when looking at two guys I have ranked similarly. You look at Jeter and Hardy on the current ADP reports and they're 6 slots apart so you look for things to help separate them. Obviously, the large age gap comes into play but the downward trend of Jeter's SecA over three years while Hardy has been over .280 in 2 of the past 4 years helps make that an easier call for me. In the current mock draft I'm doing, Sheehan made that an easier call for me when he took Hardy 4 spots in front of where I was set to take him so I went with Jeter.
Reply to moonlightj
jthom17
How does SecA compare to TAv? It would be great to see the same analysis for TAv. If it has been done before, I would appreciate a reference.
Reply to jthom17