Last month, Out of the Park Baseball released their 12th version of the classic baseball sim. They set the bar high with last year’s release of OOTP 11, and for this season they’ve piled on plenty of enhancements in added features and options. Despite the additions to the game, for the long time players of OOTP, it feels instantly recognizable. The interface and main features have remained largely unchanged, and that’s a good thing. It’s when you pop the hood and get into the details where you really notice the improvements for this year’s model.

The depth of this game is simply staggering. You could spend a week just adjusting settings such as your average ticket price, how aggressive on the bases you wish to be in the late innings of a tie game, or your budgets for the upcoming season. The following screen cap of the Royals budget info in my sim just scratches the surface as to the areas you can manipulate to try to get your team to rise to the top. You’ll notice I’m having as much success in my sim as the real life Royals. Uncanny! 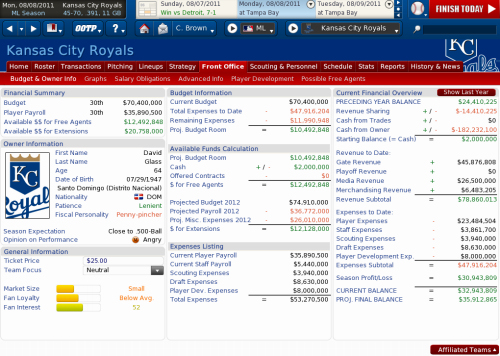 (Of course, I’m not sure who decided that the former president of Wal-Mart was a native of the Dominican Republic, but that’s a sim for another day. It would appear they hit the fiscal personality on the head, though.)

If you are going to sim a single season, you can execute the job as either the General Manager and simply “watch” the game from your skybox while fiddling with your Blackberry, wheeling and dealing and adjusting your 40-man roster, or you can handle all the reins as a Whitey Herzog-esque GM/manager type. Playing individual games on OOTP can be loads of fun where you call for the corners to guard the lines in a “no doubles” defense, a double steal, or a pitch out. However, given the amount of time it takes to complete one game, it can really slow a sim down. Myself, I prefer to act as the GM and let my field manager run the club as he sees fit (although I have been known to enter the dugout from time to time to run a game). This is where OOTP really thrives as you can micromanage exactly as much as you please.

One of the strengths of OOTP is its customization. This is a personal preference, but I don’t enjoy simulations with fictional players and fictional teams. It’s much more compelling when you’re using the real MLB universe. Do a cursory search for some of the OOTP modification websites, and you’ll soon be on your way to playing the game not only using real MLB players, but with real photos, logos, and color schemes. It’s a small thing, but in my mind, it makes the game much more enjoyable (and real) when using real players, teams, and colors.

If you don’t care much for the current year, the historical sims are crazy fun as well. One of the first things I always do with a new version of OOTP is to start a game in 1901 and just let the sucker play, stopping long enough to check the simulated numbers for players like Ty Cobb, Rogers Hornsby, Mickey Mantle, and Willie Mays. OOTP has always handled historical sims extremely well. If you choose to keep it as “real” as possible, they’ll use financial data accurate to that particular year and things such as expansion and team relocation will happen according to schedule. The reserve clause? Yep, it’s in here as well. It’s the small things like this that make the game so great.

With a simulation like OOTP, one question that’s always asked year after year is “what changes or improvements have been made?” It’s difficult to justify spending cash on a game that just updates rosters year to year, but OOTP has always made enough changes to bring me back for more.  One area where the game has improved is in its handling of minor leaguers and it’s ranking of top prospects. New to version 12 is a screen featuring an organizational depth chart with a summary of the minor leagues and that particular team’s top prospects. It’s a great (and much welcomed) snap shot of player development. 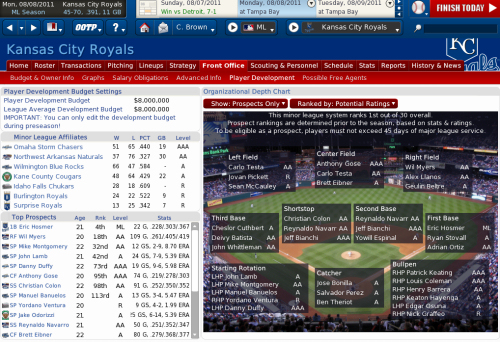 Also improved in this edition is the trade engine. Let’s just say it feels much more realistic where you won’t be able to pry away top talent for next to nothing. Even the Astros seem savvy in this game. The financials are another area that has been tweaked with a new contract negotiating system. It’s the tiny things that help give this game its overall feel of realism.

If I had one quibble with OOTP, it would be that it could do a better job presenting the historical info that you generate while playing the simulation. History is such a huge part of the game, and it just feels like OOTP runs out of steam here. If I’m three years into my sim and I want to revisit the 2011 season and run a report on the top K/9 starting pitchers, that seems like something that the game should be able to handle. Same with pennant races. Often, I’ll run a historical sim where I play a whole decade at a time. Sometimes, I’d like to go back to see how a particular pennant race played out for a specific season. Unfortunately, once the season is complete, there’s no way to find out if some team pulled a miracle ’64 Phillies type of comeback.

OOTP has executed the near impossible in that it’s created a game that provides value to everyone, no matter their baseball sim experience. If you’ve played OOTP before and are looking for an upgrade, OOTP 12 has that familiar feeling, and the additions to the new version make it well worth the money. And if you’ve never played a computer baseball sim, OOTP is the best place to start. OOTP 12 is as close to the front office experience you can get without having to actually wear a suit and tie.

Out of the Park Baseball 12 is available for $39.99 on PC and Mac. This review is for the Mac version. Developed and published by OOTP Developments.

Reply to lifeonmars
beerchaser42
There is a iPhone app now, called iOOTP. Not sure about an Android version.
Reply to beerchaser42
paulbellows
I've spent many hours playing OOTP and it is pretty awesome. I am glad that the trade engine has been upgraded as it used to be pretty easy to fleece the AI.

About the only thing I did not like was many players after the amateur draft were already ML ready and would automatically become the best player on the team which is not realistic. Not sure if that has been changed but for the price of $40 you will easily get your money's worth.

If you don't mind using fictional players and want to play against 31 other actual team owners Hardball Dynasty is loaded with realistic details.

Reply to paulbellows
davinhbrown
So does the game not start out with the 'real' MLB players of current day? [I've never played or seen this game before]

Anyone else have any reviews, details, suggestions, etc about this game for a newbie prospective buyer?
Reply to davinhbrown
beerchaser42
OOTP has a MLB Quickstart option that allows you to start the 2011 season with current MLB players. It's a great game but there is some learning curve time to get up to speed because of the sheer number of options and customization available. I'm still kinda new at it myself and still learning.
Reply to beerchaser42
paulbellows
You can either play a single year or you can set it for career mode. As a Twins fan I started out in 1982 and played until current day. Every year during the amateur draft the real players available that year would enter the game.

You can alter the setting in hundreds of ways. You can have the real players behave exactly as they did in real life or you can alter their historical performance so much that they would be that player in name only.

Since you can access any team since 1901 you will no doubt get your money's worth.
Reply to paulbellows
cef1970
I have been playing iOOTP on my ipod. It's got a couple of small bugs and nowhere near the customization as full OOTP. But it's super cheap, as I recall, under $5, and a fantastic time-killer.
Reply to cef1970
fsgillispie
Wonder what the "Fiscal Personality" of the current Dodgers management would be? "Random"?
Reply to fsgillispie
stukaju87d
Hey great column!Are you doing the weekly pitching planners anymore?
Reply to stukaju87d
cbrown1970
Thanks. Haven't had time to write one lately (vacation, work, etc.) and unfortunately, it doesn't look like there's going to be much time in the future, either.
Reply to cbrown1970