On Tuesday, Jason Collette penned an article entitled “Kimbrel and Venters: Ticking Time Bombs?” in which he examined two of 2010’s most overworked relief pitchers: the Braves’ dynamic duo of Craig Kimbrel and Jonny Venters. Everyone knows their story by now: extremely young pitchers, barely 100 major-league innings between them coming into the season, and being ridden incredibly hard by Braves manager Fredi Gonzalez. As such, every broadcaster, beat writer, blogger, and fantasy analyst is wondering how the duo will be affected, each postulating their own opinions, opinions that fill the entire spectrum of possible opinions. Those who think modern day pitchers are babied are thrilled to see such a throwback approach. Others believe that such unbridled usage will inevitably lead to injury or collapse. So where does the real answer lie?

While Jason looked at how overworked pitchers fared the following season, I thought I’d use a slightly different approach and examine how pitchers who are overworked in the first half of a season fare in the second half.

The Study
For my study, I’m going to look at all 89 relievers who pitched in at least 40 games and accumulated at least 40 innings in the first half of any season since 1990 (excluding the strike-shortened ’94 and ’95 seasons). Because of the selection bias in this group of relievers (a reliever who is used so heavily is likely pitching above his true talent level—i.e. getting lucky), I’ll need a control group to compare to.

I chose my control group by first looking at all relievers with a normal workload in the three months of the season—defined as pitching between 20 and 35 games and between 20 and 35 innings—and then manually matching up the 89 “high workload” pitchers with the “normal workload” pitcher who was most similar. The comparisons were made based on year, ERA, strikeout rate, and walk rate. I left off all names and second-half numbers so that I wouldn’t unintentionally bias the selection process. In doing this, it left me with a near identical set of pitchers in terms of first-half numbers, so if having a heavy workload decreases a pitcher’s effectiveness in the second half, it should show up in the comparison of the two groups. Here is how the first half-seasons for our two groups break down:

Nearly identical. Now let’s see how each group fared in the second half of the season.

We see an identical trend for games and innings. The “normal workload” group sees almost no change in their workload from the first to the second half. The “heavy workload” group, however, sees a large drop-off. I think there are three primary reasons for this, but only one of which is a cause for concern: 1) Injuries, 2) Managers intentionally limit use for fear of injury, 3) Pitchers are used less as their first-half luck abates and they no longer look like supermen. Injuries, of course, could come into play here, but we can’t say with any amount of certainty how much of the nine-inning drop is attributable to injury. Perhaps that would make for a good article another day. 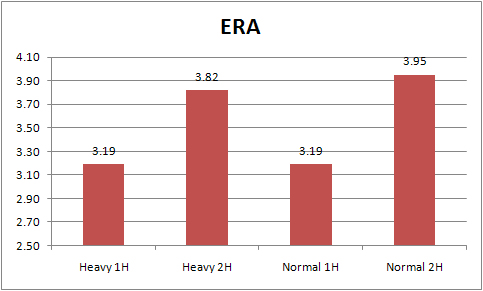 Of course pitchers with a heavy workload regress heavily in the second half—they were playing over their heads to begin with—but so do their comparable players. What’s interesting is that the heavy-workload pitchers actually regress slightly less than their counterparts do. 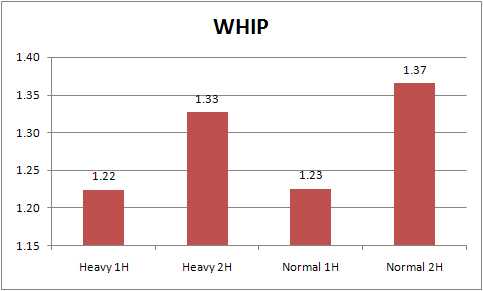 Again, we get a very interesting result. While pitchers with a heavy first-half workload tend to work fewer innings in the second half, their WHIP performance in the second half does not seem to be affected as much as the group of similar pitchers who worked less in the first half. 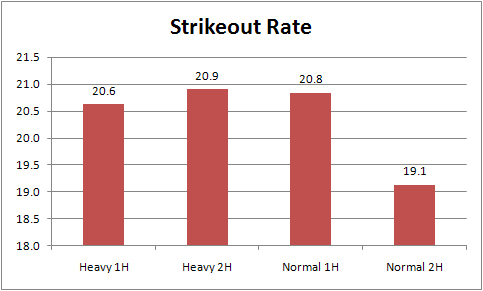 Following our trend, the strikeouts for these pitchers increase as well—and this is our most dramatic result to date. While the “normal workload” pitchers see a decline in their strikeout rate, the “heavy workload” group actually sees a small increase. 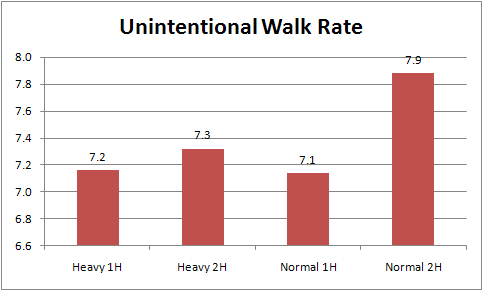 I think I’m noticing a pattern here. For walks, there is little change for the “heavy workload” group but a relatively large change for their “normal workload” counterparts. It’s not as dramatic as strikeouts, but it’s there. 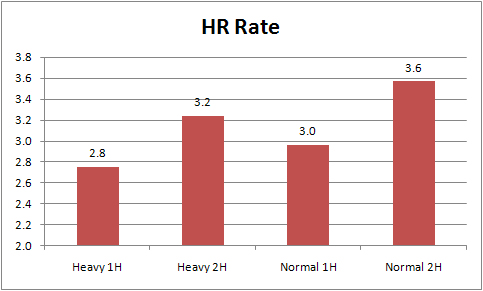 Here, finally, the two groups are again about even.

Making sense of these results
These results are the opposite of what we might expect. If a pitcher is overworked, we tend to assume that it will negatively impact his performance going forward. While overworked pitchers decline across the board in the second half (except in strikeout rate, which is very interesting unto itself), they don’t decline as much as pitchers who also had great first halves but didn’t pitch as frequently. Why is this?

Maybe managers see something in these players that we don’t. Or maybe my control group wasn’t selected using all of the necessary variables. If a pitcher is worked hard in the first half, he’s probably worked hard right out of the gate. But for a manager to trust a pitcher enough to do that, we must know something about the pitcher at the start of the season—namely that he’s good. So while the “heavy workload” group is likely good to begin with, it’s possible that the “normal workload” group lucked into their excellent first-half performance a bit more than their counterparts—even if it was the same performance.

The second-half numbers are, more or less, randomly selected, so perhaps it’s just that they represent the true talent levels of the pitchers and that the “high workload” pitcher are simply better. After all, they were the ones chosen to work so many innings. The control group pitchers necessarily were not.

In any case, I think these are some interesting results that we should think about. It doesn’t seem as though there’s much evidence to suggest a high workload hurts a pitcher’s effectiveness (at least in the short term). Including pre-season projections in the process would allow us to say so more definitively, but for now, there is an absence of evidence.

Heavy Workload
Below 10: 1
10-20: 2
20-30: 17
30-40: 43
Above 40: 26
Reply to derekcarty
Tarakas
My guess is there is substantial selection bias from the managers which makes it hard to compare the groups. The reason they rode the first group heavier is that they believe they are better pitchers.
Reply to Tarakas
Tarakas
Nice study, though!
Reply to Tarakas
derekcarty
Yes, I too imagine this played a part. I think if we could include a good preseason projection in the process for selecting the control group, we'd be able to come up with a better set of comps. That, we're comparing based on player quality and first-half performance. I'm going to see if we have historical PECOTA projections, and if we do, that would make for a good follow-up piece.
Reply to derekcarty