A big part of that success can be credited to the pitching staff that currently has the highest team VORP in the league—a full 19 points over the San Francisco Giants—and the second-highest team FRA—just 0.1 points behind the vaunted Philadelphia Phillies pitching staff. Their actual 3.12 ERA also trails the Phillies, but plate appearances against Braves pitchers end in strikeouts 21 percent of the time, which is tied with the Giants for the best in baseball. As good as Jair Jurrjens, Tommy Hanson, Tim Hudson, and Brandon Beachy have been, the team’s bullpen has been incredible. Lefties Eric O’Flaherty and George Sherrill have helped bridge the gap between the starting rotation and their thunder-and-lightning combination of Craig Kimbrel and Jonny Venters at the back end of the bullpen.

That duo had fewer than 105 innings of major league experience heading into this season, and most of that belonged to Venters since he spent the majority of 2010 with the Braves. So far this season, Kimbrel has a 1.93 SIERA while Venters sits at 2.38, and the duo is arguably the deadliest one-two punch in baseball. That said, they are also one of the most over-worked duos in baseball. Coming out of the break, Venters has pitched in 51 games so far in 2011 while Kimbrel has thrown in 47 contests, giving the due a combined 98 games pitched. If they both continue on their current pace, Kimbrel will appear in 83 games while Venters will appear in 89. Manager Freddi Gonzalez has talked about scaling back the work for the dastardly duo, but in the heat of a playoff race, it is tough to imagine him living up to those words.

Not only are both pitchers on pace to appear in more than 80 games each, both are on pace to work more than 80 innings this season. Kimbrel is on pace for 81 innings of work while Venters is on pace for a whopping 97 innings of work. In today’s day and age of bullpen usage, that is not a common feat. In fact, nobody has done it in the past two seasons, but Venters (surprise!) fell one outing shy of doing so last season.

Many people will point to Joe Torre for his usage of Scott Proctor in 2006 and 2007 as bad usage of a reliever. Torre used him in 115 games before he was shipped off to the Dodgers, where Grady Little used Proctor 31 times and to give him back-to-back seasons of 83 appearances. Another example was Tom Kelly’s fondness for “Everyday” Eddie Guardado, who was used 83 times in a 78-win season in the first of an eight-season run of at least 60 appearances.  Every pitcher is different, though. After all, Joe Maddon utilized Randy Choate in 85 contests last season, but Choate has shown no ill effects this season as he has been a very dominating lefty specialist for the Marlins.

The effect of appearances and innings is up for debate, but how does a double dose of those two factors affect pitchers the following season? Since we have two pitchers on pace to hit those measures on the same team—both of which have solid-to-excellent value in both redraft and keeper leagues—let’s take a look at how pitchers that go 80×80 do the season following such arduous work.

Over the past 20 seasons, 42 pitchers have broken the 80×80 barrier in a single season, starting with Juan Agosto in 1990 and ending with Carlos Marmol in 2008. I focus on the last 20 seasons since bullpen usage has become more specialized over the past twenty or so years compared to the early 80’s and prior, when relievers would routinely go two to three innings. The sample size is admittedly small due to those constraints, but even expanding the date range back to post-WWII only increases the sample size by another 30 pitcher seasons.

The graphs below show how the 80×80 members performed, as a whole, the season in which they made the 80×80 club along with how they performed the season following that accomplishment.  The graphs also show a control group of relievers with “normal” workloads. I’ve defined “normal” as pitchers who threw between 50 and 70 innings out of the bullpen in a given season. 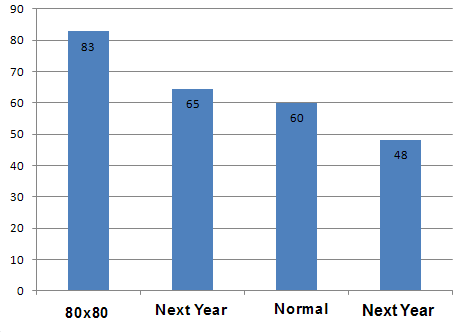 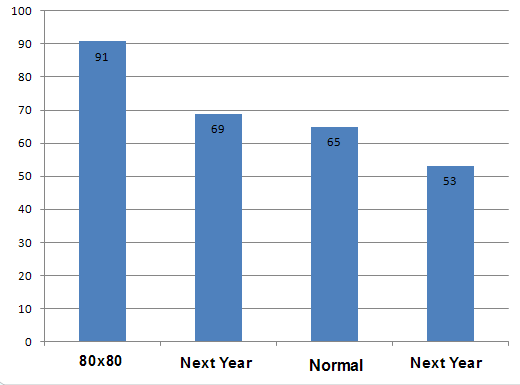 Only Salomon Torres (2004) saw an increase in innings after his 80×80 season and, at that, it was an increase of just two and two-thirds innings. Torres was unable to repeat the feat in 2007, however, as he threw 41 fewer innings that year following his final 80×80 season, joining Billy Koch, Greg H. Harris, Proctor, Villareal, and Moylan as pitchers who saw their workload drop by at least 50 percent due to injury or ineffectiveness. In all, 17 different pitchers saw their innings total drop by at least 24 innings the season after working over 80 innings. On the whole, the 80×80 group saw a 24 percent reduction in innings the following season while the normal group saw just an 18 percent reduction in workload. 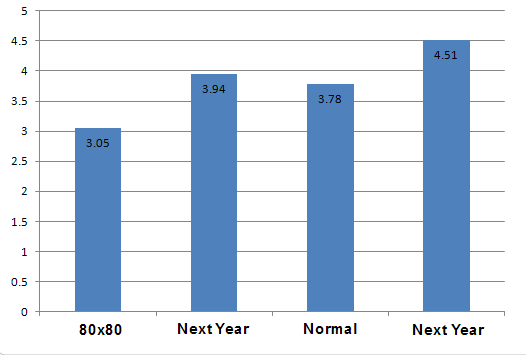 Obviously, there are many influences on a pitcher’s ERA from one season to the next, and our sample size may not be large enough to drown out all the noise.  Brad Clontz actually saw his ERA improve by nearly two full runs, one of 16 different pitchers who saw their ERA improve by at least one full run after going 80×80. Villareal, Harris, and J.C. Romero, however, all saw their ERA’s worsen by three runs or more. 80×80 pitchers, as a group, saw their ERA increase by 89 percent while the Normal group increased by just 73 percent. 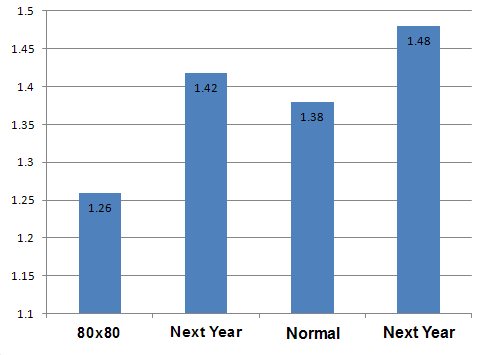 Kline, Swindell, Capps, Rauch, and Turk Wendell are the only five pitchers who saw an improvement in their WHIP a season after going 80×80. Stan Belinda, Quantrill, and Torres (twice) saw no change, while everyone else suffered a drop-off with Romero, Marmol, and Aaron Heilman suffering some of the worst damage.  The difference in group WHIP changes is much more noticeable than group ERA changes as the 80×80 group saw a 16 percent spike in their WHIP compared to just a 7 percent spike for the Normal group.

By Strikeout to Walk Ratio 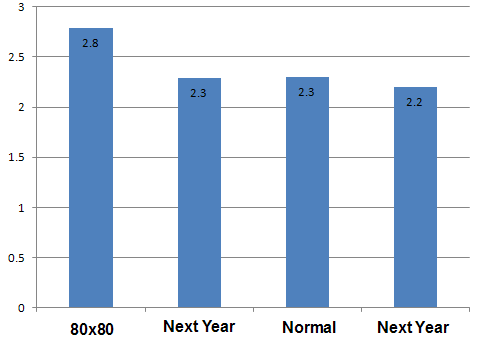 14 pitchers here actually improved the season following the high workloads with Chad Qualls and Jon Rauch showing the most improvement.  28 pitchers, however, showed a decline in their command of strike zone (as measured by K/BB) led by Quantrill (who went from a 4.8 ratio in 2001 to a 2.1 ratio in 2002). The Normal group was able to nearly repeat their strikeout to walk ratio in the following season while the 80×80 team was much less successful 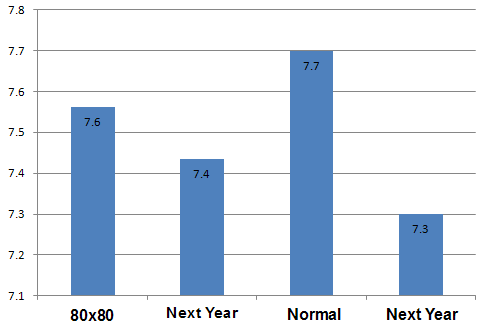 Surprisingly, 19 pitchers saw an improvement in their strikeout rate following an 80×80 season with Proctor leading the way; his strikeout rate jumped four full points from 2007 to 2008 despite the rest of his line declining badly. 23 pitchers saw their rates decline with Belinda, Rod Beck, Mike Timlin, and Felix Rodriguez all suffering a drop-off of two or more strikeouts per nine innings.  Interestingly, the 80×80 group suffered a drop-off only half as severe as the control group in this metric.

Conclusions
The only thing we can say with any amount of certainty is that Kimbrel and Venters are going to work less next season, which is not exactly a tremendous revelation. History tells us, however, that relievers who work in at least 80 games with at least 80 innings pitched in a given season have collectively had worse results the next season with some even suffering arm-related injuries. It is typically good practice to handcuff your closer with his setup man in case something were to happen, but when that setup man is suffering from the same usage patterns as the closer, it creates a very interesting situation.  Fantasy owners will need to monitor the usage of Kimbrel and Venters moving forward, especially in keeper leagues, keeping the results of this study in mind as they start looking toward their 2012 roster plans.

You need to be logged in to comment. Login or Subscribe
Lopecci
Nice article Jason. I love this one especially, because so many "experts" out there have questioned Fredi's bullpen management this year. One expert will say "he should have brought in Kimbrel with a tie game on the road in the 10th" (even though he pitched in the previous 4 of 6 games). Another expert will say, "he's going to burn Venters out before the year is up". Etc, Etc. So whats too much, or not enough? Who really knows? The way I see it, and from what most other people say, relievers are pretty much a dime a dozen, good for a few years, then fades away (with a few notable exceptions). I would say managing your pitchers would have to be on a day to day basis. I think a good manager knows if a guy is getting worn down or not. Lots of good debates over stuff like this. Thanks again Jason !!
Reply to Lopecci
zasxcdfv
What about a guy like Pedro Feliciano, who pitched in a lot of games (64,78,86,88,92) but not that many innings (never more than 64)? Is the lefty specialist a weird thing?
Reply to zasxcdfv
moonlightj
Since LOOGY's typically do not have a lot of fantasy value, I went with the 80 and 80 rather than 80 or 80 approach.
Reply to moonlightj
ScottBehson
It is also interesting that, since only the best relievers are typically able/used in 80x80, even with their performance drop-off, they are still better than other relieving options. Just don't over-pay.
Reply to ScottBehson
BindleStiff
The concluding paragraph appears to suggest that 80/80 pitchers, as a whole, have worse results in season X+1 because they have been worked hard in season X.

But couldn't it be simply that the pitchers were more likely to reach 80/80 in season X because they were achieving results that were closer to the high end of what they could be expected to achieve? And thus likely to regress further the following year?
Reply to BindleStiff
moonlightj
"The only thing we can say with any amount of certainty is that Kimbrel and Venters are going to work less next season, which is not exactly a tremendous revelation"

The rest of it is certainly up for debate. Regression and injury can come up making it tougher for success to stay at current levels, but the meme out there right now that Fredi is going to kill these guys by September just isn't that conclusive to be out there like it is.
Reply to moonlightj
BindleStiff
@JC
Reply to BindleStiff
drawbb
I'd like to see the word "meme" die an instantaneous death. Definitely the most pretentious term of the last 2-3 years along with "going/went viral".
Reply to drawbb