Today, I thought I’d look at a couple players who are having surprising seasons but who I’m buying into almost completely.

Brennan Boesch | DET | OF: I’m buying into Boesch’s terrific season. I was impressed with his power as a rookie last year, and I was a little surprised when there was talk that he would not begin 2011 with the big-league club. He made the team in a part-time role, but that didn’t last long; Boesch is starting most every day now.

When you first look at the average distance of his home runs (395 feet), you may think his power is nothing special since he’s essentially league-average. But recall what I said last week when I was talking about the pitfalls of using average distance as an indicator of power.

For hitters who have extreme pull power and rarely hit homers to center, their average distances are going to be lower, but that doesn’t necessarily make them any less likely to continue hitting a lot of homers. Left-field and right-field fences are shorter than center-field fences, so a player with extreme pull power can get away with hitting the ball a shorter distance (and even if they hit deep ones, they’ll have more short ones fall in to drive the average down).

Boesch is a guy who fits this description. He is capable of hitting the ball a good distance; he has seven of his homers over 400 feet and two over 430 feet, but his average is driven down by a few homers around and under 350 feet near the right-field foul poles, where the fences are so short. 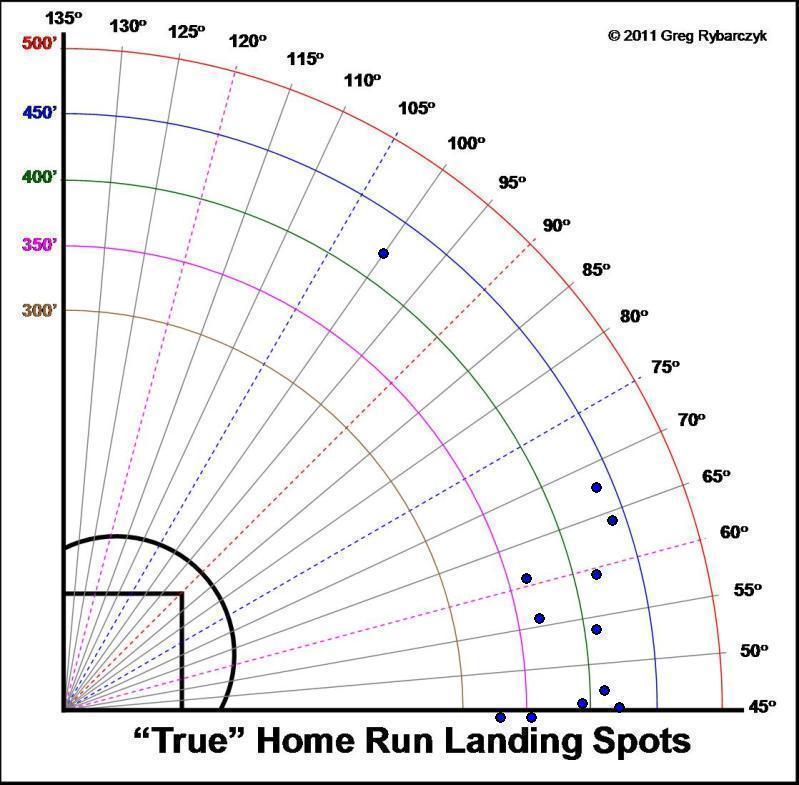 Additionally, Boesch has had seven of his homers this season classified as “No Doubt” shots by HitTracker. That’s a whopping 58 percent rate; the league average from 2006-2010 was just 18 percent. While his HR/FB of 11.5 percent is around league-average, his No Doubt rate indicates that he could boost his power numbers a little going forward.

One of the knocks on Boesch was that he wasn’t disciplined enough at the plate. BP2011 described Boesch as having a “long swing, large strike zone, and hacktastic approach,” and BP2010 said, “between a swing more hole-y than the Pope and a swing-at-anything approach less discriminating than Tila Tequila, there are issues that go beyond mere ironing out.”

But this year, Boesch seems to be a little more discerning at the plate. He’s swinging at 51 percent of pitches, down from 57 percent last season. As a result, his strikeout rate has dropped from 21.3 percent to 17.7 percent. When you consider how quickly a batter’s strikeout rate stabilizes, there’s reason to believe Boesch may have figured something out and will continue to show such discipline going forward. Perhaps not totally unrelatedly, Boesch has seen an increase in both his line-drive rate (15 percent to 19 percent) and BABIP (.297 to .335). His xBABIP is .311.

Add this all up, and Boesch’s .307 average doesn’t look all that unsustainable. The strikeout rate and BABIP may regress a bit, but I still think a .280 average with slightly above-average power (and even a handful of steals) is quite likely for him going forward. Given that he has mostly batted second or third in a potent Tigers lineup, Boesch will also be able to pad his RBI and run totals. Given his contribution to all five categories, I’m buying into Boesch as a top-30 outfielder for the rest of the season.

Mike Morse | WAS | 1B/OF: Morse had to battle for his starting spot during spring training but won it after a strong March. He had a terrible April, though, hitting .211 with just one home run. From May 4 to May 15, he started just one game, but after Adam LaRoche was injured, Morse started receiving regular at-bats at first, finally shaking off the early-season rust. Now batting .298 with 15 home runs, you wouldn’t even know that April happened, and there’s every reason to assume Morse can maintain this pace.

As a prospect, one of the biggest knocks on Morse was his lack of power. BP2010 said, flat out, “Morse's missing piece is power. He has never consistently produced the sort of thunder you’d hope for from an infield corner, even in a reserve role.” His homer rate per contacted ball was just 3.6 percent over five Triple-A seasons from 2005 to 2010—mostly in the hitter-friendly PCL—and was just 1.3 percent in the majors while with Seattle.

But when Morse was traded to the Nationals in 2009, something seemed to click. Since his move to the National League, his homer rate has been 7.6 percent, and it appears that he has developed the raw power to back it up. Some players are simply late bloomers, and since Morse turned 27 when he moved to the Nationals—around the time of a player’s peak—it seems likely that his power surge is for real when the raw observational data shows that he is capable of hitting the ball well past 400 feet (with a few even going 450 feet). Maybe he lacked power coming up, but that’s simply not the case anymore. Morse is no longer a Quad-A player. Maybe he won’t have a 35-homer pace like he has now, but 25 to 30 seems completely reasonable.

Morse is currently batting .289, and I don’t think he’ll fall too far from that. His 24.1 percent strikeout rate is right in line with his career line, and his .330 BABIP is actually lower than his .345 career mark and in line with his .329 xBABIP. His infield fly rate over the past two seasons is minuscule; he’s popped up just half as often as a league-average hitter. His 635 major-league balls in play would mean that we should use just 36 percent Morse and 64 percent league-average, but he also posted a .331 BABIP in 916 Triple-A balls in play–and remember, this was a time when we wasn’t the same hitter he is now. Of course, that BABIP would be discounted when moving to the majors, but when you consider the legitimate changes in his power hitting and aging effects (he’s been playing in Triple-A since 2005 when he was just 23), I don’t think it would be completely unreasonable to predict Morse to keep posting a solidly above-average BABIP. Maybe I’m being a little too bullish, but I like what I see from him. I’d put Morse at a .280 batting average the rest of the way given just a small power and BABIP regression, and batting fourth or fifth in the Nationals lineup, he should be able to reach at least 90 RBI and 80 runs.

You need to be logged in to comment. Login or Subscribe
davescottofakron
I very much appreciate Carty going back to previous BPs and showing what they said about these late bloomers. That helps me make judgments about what I read this year.
Reply to davescottofakron
derekcarty
Thanks. Just don't take it as previous BP's being wrong - I simply used them to show that this is how the player was, but now that he's getting older he's making adjustments to correct previous problems. I wouldn't argue that Morse had light-tower power three years ago - he didn't. And Boesch was a bit of a free swinger, but now they've made strides to improve these parts of their games.
Reply to derekcarty
BeplerP
Curious- no player card (sorry- just a dummy card) on Mike Morse. Yet it sounds like he has been around at least 5 years? How can that be, even if his time in the majors was minimal?
Reply to BeplerP
derekcarty
Ah, he's listed in our database as Michael Morse. There is another Mike Morse, apparently. Here's his real card: http://www.baseballprospectus.com/card/card.php?id=MORSE19820322A
Reply to derekcarty