Thanks to Sega for sponsoring this post. Click here to sign up for Sega's MLB Manager Online and test your skills against teams from across the country.

This season, there are 17 players who are 26 or younger who have hit at least 10 home runs. Of those home runs, it’s not surprising a majority of them have gone to the hitter’s pull field.  There are a couple of hitters though, who have flashed the occasional power to the opposite field. Studies have shown roughly a quarter of all home runs fly to the hitter’s opposite field (and center field) with the remaining three-fourths going to the pull field.  Young players who own opposite field power are legit. Those are the ones to keep an eye on going forward. Here are three I’ve been watching:

With 10 home runs in the season’s first two and a half months, Stubbs is on pace to match his total output of 22 long balls from last season. The difference between this year and last however, is the right-handed hitting Stubbs is now hitting for more power to the opposite field. Of his 10 home runs on the season, nine of them left the park (his last home run on June 17 was an inside the park number.) Of those nine that have sailed over the fence, four of them – or 45 percent – have gone to the opposite field.

From ESPN Home Run Tracker (aka HitTracker), here are the landing spots of Stubbs’s home runs. The plot in center field is the one that stayed in the park. 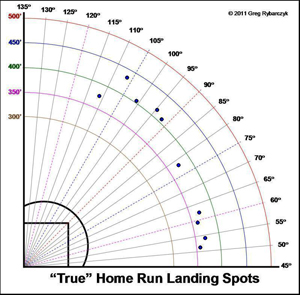 Stubbs showed some signs of this opposite field power last summer, but not at a rate like this. In 2010, five of his 22 home runs went to the opposite field.

Stubbs is on pace to again bash 22 home runs. What’s interesting about this is that he’s doing it while hitting fewer fly balls as a percentage of balls in play.

Holding Stubbs back from becoming an elite fantasy player is his contact rate. He’s putting the bat on the ball in only 73 percent of his swings when league average is roughly 80 percent. He’s only putting about a quarter of the pitches he sees for strikes into play, which is again below the league average of 30 percent. These rates are all within Stubbs’s career norms. That means even with a robust .354 BABIP, his overall average remains low at .261. Fortunately, Stubbs may be one of those hitters who will always post a lofty batting average on balls in play.

Not only is the average not going up any time soon for Stubbs, we have to hold our collective breath that he doesn’t go on a streak where he hits a bunch of balls directly at fielders who can turn them into outs. If that happens, his average will drop faster than Pets.com stock.

Because Stubbs isn’t a bona fide “power hitter,” there will be lean stretches. In fact, he’s just coming off of one where he failed to leave the yard in 105 plate appearances from May 13 to June 4. During that stretch, he managed just six doubles and a .306 slugging percentage. Since then, he’s hit three home runs (one of those was the inside the park number) and posted a .456 slugging. Much better.

While Stubbs isn’t a prototypical power hitter, his opposite field numbers show the power he owns is very real. If he can nudge his fly ball rate into the upper 30 percent range, he shouldn’t have any trouble maintaining his current home run rate. That would give him somewhere in the neighborhood of 25 home runs for the season, and I’d probably even take the over on that number. Stubbs won’t finish the season as a 30-30 hitter, but he’ll be knocking on that door.

Andrew McCutchen – 10 HR, 3 to the opposite field

The right-handed hitting McCutchen hit a career-high 16 home runs for the Pirates last year, so he’s already over 60 percent of the way to matching that total with more than half the season remaining. One thing to note about his home run total last season, though, was that all were hit to his pull field. This season, he’s adjusted his swing and has begun to generate some power to right.

Unlike Stubbs, McCutchen has never had difficulty making contact on a consistent basis. He puts 29 percent of his total strikes into play (which is right around league average) and owns an 81 percent contact rate. That means he hasn’t been as dependent upon BABIP. For the season, McCutchen has a .319 BABIP, which is perfectly aligned with his career rate of .318.

In fact, consistency has been McCutchen’s calling card almost from the beginning. Check his slash line through his first three seasons.

Nothing spectacular… Just steady improvement, for the most part, from year to year.

One area where he’s really taken a leap forward is in his home run per fly ball rate. In each of his two previous seasons, he parked on 8.8 percent. This season, McCutchen owns an 11.8 percent HR/FB rate. Normally, a blip in HR/FB rate isn’t worth mentioning. In this case, with the emergence of opposite field pop, this is now a situation worth monitoring.

Since Stubbs technically has nine over-the-wall home runs, I figured I could expand the search a bit.

Avila flashed promise during a late season call-up in 2009 when he bashed five home runs in just 72 plate appearances. Last year, he struggled to find that stroke as he managed only seven long balls in 333 plate appearances. Not surprising, his ISO lost 200 points from his first to second season. Of course, it’s easy to discount his opening salvo against big league pitching as a small sample size aberration.

This year, however, Avila has shown that maybe there was something to that small-sample outburst as he’s collected an extra base hit in just over 11 percent of all plate appearances, nudging his ISO to .235. Plus, as HitTracker shows, he’s distributing his home runs equally among the bleacher creatures. 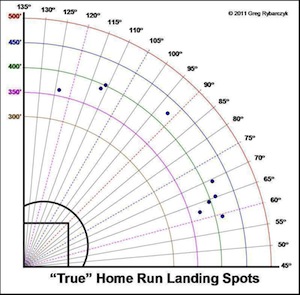 Last season, he posted just a 35 percent fly ball rate with a nine percent HR/FB. This year, he’s hitting more balls in the air (43 percent fly ball rate), and he’s boosted his HR/FB to just north of 13 percent. Maybe his offensive surge isn’t all that surprising, given that of his seven home runs he hit last year, four were to the opposite field. He just needed to get the ball in the air more.

In the American League, catchers are hitting a collective .235/.304/.375. Avila is hitting .305/.375/.540, making him one of the top performers at his position. I think, given the demands of the full season behind the plate and with the emergence of his opposite field power, we’re looking at a candidate to set up shop in the neighborhood of 20 home runs for the next several seasons.