Jose Lopez | FLA | 2B/3B: Lopez was considered a sleeper pick by many coming into 2011, but has been a complete bust thus far; he had a terrible stint with the Rockies, who released him a couple weeks ago. He recently signed on with the Marlins, though, and after spending just four days in the minors, he was called back to the Show yesterday.

While there’s no denying he has been a drain on fantasy teams this year, this is a guy who had posted double-digit homers five years running coming into 2011, and really the only truly out-of-line marks from his stint in Colorado were his BABIP (which is highly unstable) and, to a smaller extent, his power.

I’m actually quite optimistic about Lopez’s power returning (or possibly improving) in Florida. If you look at his HitTracker chart for his years in Seattle, you’ll notice that Lopez doesn’t hit the ball very far but manages to survive by hitting all of his homers a modest 350 to 400 feet and depositing them all into an orderly clump in left field: 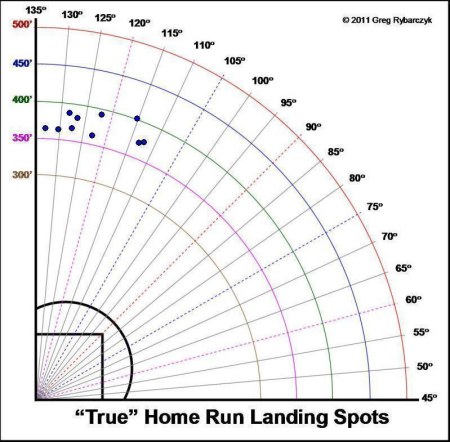 Lucky for him, the left-field wall of his new home, Sun Life Stadium, strongly resembles that of Safeco:

In fact, it appears that Sun Life may be a bit more accommodating for Lopez. Sure, center and right field are deeper than Safeco, but that left-field alley is perfect.

Lopez isn’t guaranteed playing time to start off, but if he hits even a little, that starting third-base job could easily become his; I have a very hard time seeing the dynamic duo of Greg Dobbs and Wes Helms standing in his way. Lopez needs to be owned in all NL-only leagues and is worth a bench spot in very deep mixed leagues, with the potential to have legitimate mixed-league value if he takes the starting job.

Omar Infante | FLA | SS/2B/3B/OF: Lopez’s new teammate is another guy to keep your eye on. After a very slow start to the season, Infante was dropped to eighth in a very impotent Marlins order and subsequently dropped off the radar of many fantasy owners. However, over the past couple weeks, Infante has shown signs of life and has reclaimed the second spot in the order. He’s striking out less than in past years, walking at the same rate, and his BABIP is back to its career average since the middle of May.

While Infante doesn’t have much power or speed, he will hit a couple homers and swipe a handful of bags while batting near .300. And with Logan Morrison, Gaby Sanchez, and Mike Stanton batting behind him, runs should be plentiful.

Infante is the definition of a boring player, but boring players help win fantasy championships, especially when those players are placed in as favorable position as Infante finds himself in. If Infante paces .300/5 HR/8 SB/90 R as I think he could, that’s a guy who will have serious value even in mixed leagues of moderate depth.

Jason Bourgeois | HOU | OF/2B?: Bourgeois was on his way to gaining second-base eligibility and possibly the starting job for Houston before getting injured last month. While he was on the DL, the ‘Stros cut bait with starting second bagger Bill Hall, handing the job over Jeff Keppinger.

Teams have always liked Keppinger for his versatility, but I don’t see him as a legitimate starter. His defense at second is merely league-average if we’re being generous, and he has no power or speed to speak of. His main contribution to a team is batting average and grit, but he’s hitting just .255 in June. If Keppinger can’t maintain a respectable and stable batting average (PECOTA projects just .270), it’s going to be awful tough for Brad Mills to resist a one-two punch of speed at the top of the order with Michael Bourn and Bourgeois. I’m not saying Bourgeois is a stud, but if he gets full-time at-bats, he’s going to steal more than enough bases to be a fantasy asset.

Tsuyoshi Nishioka | MIN | 2B/SS: Nishioka was activated from the DL yesterday and could make his first start in over two months tonight against Mark Buehrle and the White Sox. Nishioka was a guy I targeted in most leagues this and who I think has now become a bargain thanks to his injury. Craig Brown had a great write-up (and some video!) of Nishioka in March, but the gist is that Nishioka is a guy who can hit for a high average and has very good speed.

He was batting second in the order before his injury, and while the Twins have quite a few top-of-the-order options now in Denard Span, Ben Revere, and Alexi Casilla, I don’t think it’ll be long before their Japanese import regains his spot. There’s talk Revere could be sent down once guys like Jason Kubel and Jim Thome come off the DL, and Nishioka is flat-out better than Casilla. As long as his injury doesn’t affect his speed or aggressiveness (it was a leg injury, after all), we could see Nishioka pace .280-.290 with 25 steals and 85 runs the rest of the way. That’s valuable in all leagues from a guy who qualifies (or will soon qualify) at both middle-infield spots.