With 7.2 innings of four-hit, two-run pitching against the Boston Red Sox on Monday night, the Indians Justin Masterson remains one of the surprise stories of the young season. Through 68 innings, he has allowed 21 walks, 51 strikeouts and just two home runs. His ERA sits at a spiffy 2.50 and his 1.17 WHIP ranks him 19th among qualified AL starters.

Masterson was drafted by those Red Sox in the second round of the 2006 draft. In three minor league seasons in the Boston organization, he posted a 3.79 ERA with 193 strikeouts and just 59 walks in 233 innings of work. He made his debut in late April of the 2008 season and struggled with his command, though. Through nine starts, he threw a total of 59 innings but walked 28 batters for a 4.7 BB/9.

Despite the control issues, Masterson was successful on the back of a .216 BABIP, keeping his WHIP at a borderline 1.26 and his ERA at a more than acceptable 3.67. However, the Red Sox felt he could be of better help to the team in the bullpen, so in early July he was sent to Triple-A to make the transition from starter to reliever.

When he returned later that month, Masterson continued to find success. As a reliever in his rookie campaign, he found his command, posting a 3.1 BB/9 and finished with a 2.36 ERA.

Masterson opened the 2009 season in the Red Sox bullpen, but was soon thrust into the rotation when Daisuke Matsuzaka hit the disabled list with a shoulder injury. He made six starts, but with a 1.44 WHIP and 4.58 ERA, didn’t enjoy near the success of his rookie campaign. Back in the pen when Matsuzaka returned, Masterson was basically a sixth inning guy and his run of form through the end of July—a 4.40 ERA and 1.24 WHIP—meant he had minimal fantasy value.

With the Red Sox in the thick of the AL East (as usual) they were buyers at the ’09 trade deadline and shipped Masterson, along with Nick Hagadone and Bryan Price, to Cleveland in exchange for Victor Martinez.

Masterson moved into the rotation almost immediately for the Indians and pitched there for most of 2010. Again, his numbers—and fantasy value—were underwhelming. As a starter, he held a 4.78 ERA with a 1.54 WHIP. He won just six games, although the dreadful Indians bullpen blew four potential wins through their ineptitude.

Masterson features a fastball and a sinker. He also mixes in a slider. From Texas Leaguers, here are his pitch breakdowns, along with velocity, through his first 10 starts of the season:

The sinker and fastball are almost indistinguishable from a velocity standpoint. Actually, these are probably the same pitch, just one version has heavier sink than the other. The fastball/sinker pitch is used to rack up ground ball outs and to set up his slider. Again, from Texas Leaguers, here are the pitch results for Masterson:

He is getting close to the same swing rate no matter the pitch, but batters have a much more difficult time getting the bat on the slider than Masterson’s other pitch(es). He will throw the slider 30 percent of the time when he has two strikes on the batter, and they’re hitting a bare .187 when ending the plate appearance with that pitch.

As his slider has developed into an effective out pitch, and while his sinker continues to have an excellent downward bit, this season, Masterson has really set up shop in the lower third of the strike zone. It’s the essential location for him to rack up his elevated ground ball totals. He works down and in to left-handed batters and will frequently push the ball across the plate and low and away. To hitters from the right side, Masterson pounds them down and in on a more consistent basis. Here is a location map, broken down by percentage of pitch location: 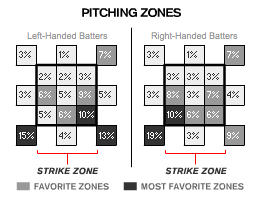 Given the zone map from above, it’s not surprising that most of his success comes against right-handed batters. This year, hitters are batting .144/.245/.165 against Masterson from the right side of the plate. Conversely, left-handers are pounding him for a line of .302/.360/.416.

The good news from looking at the zone map is that Masterson rarely makes a mistake down the center of the plate. Plus, he keeps the ball down in the lower third of the zone and is rarely in the upper third. In pitching, as in real estate, it’s all about location. And Masterson has mastered the art of locating his pitches. Entering this season, Masterson owned a 3.7 BB/9 and a 1.89 K/BB ratio. He has sliced his walk total and pushed it down to 2.8 BB/9, while improving his K/BB ratio to a much healthier 2.43.

Masterson piques my interest because, with the sinker and the location of his other pitches, he has been a consistent ground ball pitcher since day one. Here are his batted-ball rates since his rookie campaign in 2008:

It’s interesting that Masterson has the second-highest ground ball rate of his career, yet is getting more outs in the air when looked at as a ratio with his ground ball outs than ever before. A ground ball pitcher will rely on his infield defense, and this is one area where Masterson has been helped this year. Last season, the Indians ranked 21st in Defensive Efficiency. This year, they are the fifth-best team.

Despite the improvement, up the middle remains a weak area for the Indians. Orlando Cabrera had played a below average shortstop for a couple of seasons before he made the move to second base, where he continues to play below average defense.

Likewise, Asdrubal Cabrera hasn’t discovered an extra step to improve his range and he remains one of the more limited shortstops when it comes to range. However, one area that is a strength for the shortstop is turning the double play. He has converted 23 out of 35 potential twin-killings, a 66 percent success rate that is tops among all shortstops.

The lack of range up the middle isn’t going to kill Masterson, but it’s not going to help him, either. The Indians infield defense is stronger at the corners with Jack Hannahan at third and Matt LaPorta at first. Even with the improved Defensive Efficiency rating, taken as a whole, the Indians infield defense could probably be called average. Still, the improvement in the fielders behind him from 2010 to 2011 can probably be quantified by Masterson’ BABIP. Last season, opposing hitters posted a lofty .327 BABIP as several of those grounders scooted through the infield. This year, he is down to a healthier .294 BABIP.

Going forward, there is a lot to like about Masterson’s start that should be sustainable. The groundball rate has always been there and the improved command looks like a keeper. However, the Indians infield defense, especially up the middle, will eventually catch up with the young starter. Perhaps it’s already happening: His BABIP in April was .255. In May, it’s at .327. Still, if there’s going to be a correction, it doesn’t look to be too extreme. While his ERA is 2.50, Masterson’s SIERA is 3.56, which ranks him 31st among all starters.

He won’t finish the season as strong as he started, but he has developed into a solid enough starter that if you’re looking to sell high, make sure you have plenty of coverage in your rotation.

1) You probably should've mentioned that the two zone maps were from the hitter's point of view. It took me a moment to reconcile them with what at first seemed to be your contradictory verbal descriptions in the preceding paragraph.

2) I've never ever seen a pitcher's GO/AO ratio expressed in the reverse order as you did in the table above. Furthermore, the actual ratios in the chart seem much more consistent with the typical GO/AO ratios seen when looking a pitcher with groundball rates above 50% as Masterson's are. Are you sure you did not accidentally reverse the label in the heading of that column? I find it unlikely Masterson could possibly have an airout ratio exceeding his groundouts to such a degree with groundball rates over 50% and flyball rates under 30%.
Reply to drawbb