After a miserable 2009 season that saw Alex Rios set personal worsts in several offensive categories, he seemed to have rebounded in 2010. His final line of .284/.334/.457 with a .275 TAv wasn’t anything outstanding, but it was a huge improvement from the previous season. And it provided reason to hope.

PECOTA led the hope brigade and projected 19 home runs, 26 steals and a .269 batting average. It was enough to convince Marc Normandin to drop him in the bottom of his four-star category of center fielders. Although he had the foresight to understand the danger of placing him so high on his list:

Now that I've put Alex Rios back into a high tier, I'm sure he will completely fall apart again.

That is quite the crystal ball.

The first month and a half of the 2011 season has seen Rios fall apart and it has been complete. He is currently hitting .197/.259/.296 through his first 40 games with just three home runs and four steals. His TAv has bottomed out at an anemic .205.

A large part of Rios’ problem is that he has evolved into a ground ball hitter. Here are his ground ball rates going back to 2007.

In the month and a half of this season, Rios’ ground ball tendencies have reached epidemic proportions. Now, a full quarter of his plate appearances end with a ground out. As the norm for a hitter with power potential, a ground ball results when a hitter over swings and rolls over his wrists. Rios’ spray chart from his first 40 games underscores his flaw—so many of his ground outs are hit to the left side of the infield. 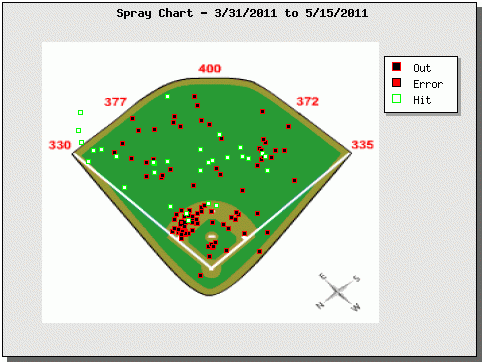 Compare that chart to Rios’ chart from the entire season of 2008, a year where he finished with a .285 TAv. 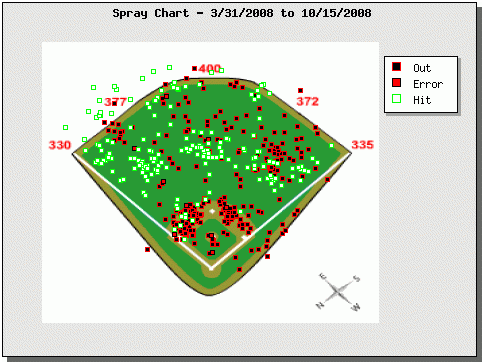 The ground balls are much more evenly spaced between second and third and first and second. Although a ground out was again the most common result for Rios at just over 18 percent of all plate appearances, the scattered nature of the plots of the grounders leads one to believe that his approach was true. While the 2008 season saw an almost five percent increase in ground ball rate, hit batting average remained healthy at .291. Quite a few of those grounders scooted through the infield as well, as he posted a .331 BABIP.

Now, the grounders are more frequent, and since they are hit mostly to the left side, his batting average has gone into the tank. Pulling balls on the ground isn’t going to allow for too many to sneak through the infield, as most of the grounders are being gobbled up by the opposing third basemen and shortstops. His current .214 BABIP backs up this assertion.

As mentioned before, Rios is putting the ball on the ground more than at any other time in his career. While the increase in ground balls will certainly erode anyone’s power numbers, Rios has been hit with a double whammy as his HR/FB rate has steadily decreased over that same time—save for a spike last summer. Here are his rates going back to 2007:

In a nutshell: fewer fly balls, plus fewer of those ball flying over the outfield fence, equals unhappy fantasy owners.

While his home run numbers have dropped (save for last year’s spike to finish above 20 for only the second time in his career) Rios has seemingly counterbalanced that with an increase in steals. He swiped 32 bases in 2008 and stole a career high 34 bases last summer in 48 attempts—also a career high.

If it’s not an accepted baseball axiom, it should be: you can’t steal second if you can’t get on first. As mentioned, Rios’ OPB is .259, which places him eighth from the bottom among all qualified American League batters. Now, he is on pace for just 16 steals, which would be his lowest total since he finished with 15 in 2006.

You would think that the lack of opportunity was hampering his stolen base total. That is not necessarily the case. Rios has had 49 stolen base opportunities and attempted just six steals. He is attempting to run in just a little over 12 percent of his chances. That is well off his performance of the last couple of years. The following table illustrates how often he has run in the past, with Run % the percentage of times he attempts a steal given the opportunity.

The chances have been there for Rios, he is just not running as much as he used to. Last month, Rios told the press that he’d been suffering with a sore big toe on his left foot—but then added that it’s been bothering him for five years. So, looking at the above table, we can probably strike that as a reason he is running less. There have been no other reported injuries, so it’s difficult to determine why he has been taking fewer chances on the bases.

Going forward, Rios will certainly figure things out and boost his average back above the Mendoza Line. It’s probably already started as he is hitting .259 since the beginning of the month. It doesn’t sound like much, but that has raised his average by almost 50 points. But a bounce in batting average alone won’t be enough to convince me to buy him on the cheap. His home run totals will continue to lag as he struggles to get the ball in the air. And his sudden decline in stolen bases is baffling.

Rios has become a fantasy enigma. And enigmas don’t win you championships.

You need to be logged in to comment. Login or Subscribe
Edwincnelson
It's hard to read the mind of a player but watching him play he certainly gives the impression of being distracted (or worse disinterested) when things aren't going well for the team he's playing on, or as the season stretches along. Since 2007 the only thing that would indicate he has any upper tier talent at all are a few good months at the beginning of the 2010 and 2008 seasons. Maybe he's just not mentally built for the grind of MLB ball?
Reply to Edwincnelson
rawagman
He had that look in spades in his Toronto days, and went out of his way to trash the team and the city after being cut loose. Very poor makeup guy - by which I mean a guy whose makeup effects his performance on the field.
Reply to rawagman
Jetson
Before we give Normandin too many points for prescience, note his fairly vehement dismissal of my trashing of the Rios ranking in the comments section of that piece.

Reply to Jetson
JasonC23
Someone on an Ozzie Guillen-managed team is running less?? I think this calls for a full-scale investigation.
Reply to JasonC23