Carlos Quentin was enjoying a breakout 2008 campaign before a freak wrist injury that required surgery ended his season prematurely. He played the entire 2009 season with a pin in his wrist and also missed a chunk of the year suffering from plantar fasciitis—understandably, his power numbers suffered. After posting a .283 ISO in ’08, he dropped all the way down to .219 and he lost over 120 points off his slugging percentage.

Quentin suffered from a variety of nagging injuries last summer, but managed to play in a career high 131 games. His overall performance rebounded a bit—after earning a .265 TAv in 2009, he pushed that number north to .283 last year (included in that bounce back was a slight improvement in his power production.) Still, with 26 HR and a .236 ISO, Quentin was far removed from the halcyon days of 2008.

A positive development for Quentin last season was the return of his opposite field power. In 2008, eight of his 36 home runs went to the right side of center field, with five of those landing in the right field bleachers. That power to the opposite field all but disappeared in 2009, with just two of his 21 home runs exiting via right field. Certainly, the wrist injury played a role in that evaporation of power. The fear with an injury like the one Quentin suffered is either the recovery remains incomplete and he remains hampered with pain or lack of mobility for the rest of his career, or while he may heal enough to eliminate those factors, his power is still drastically reduced.

Thanks to Hit Tracker, we can get an idea of exactly how Quentin’s power has shifted since the 2008 season: 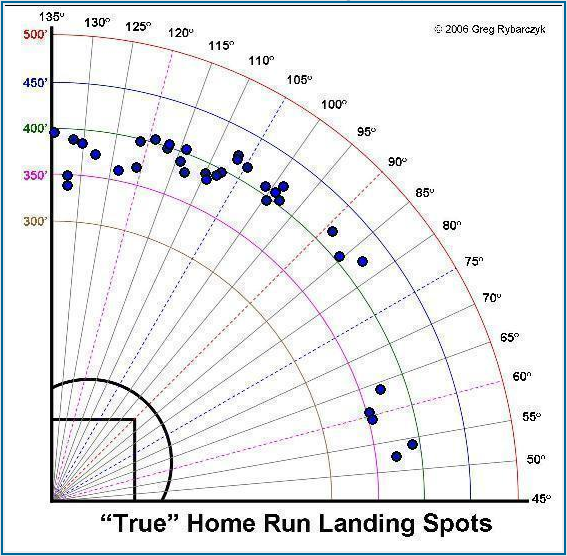 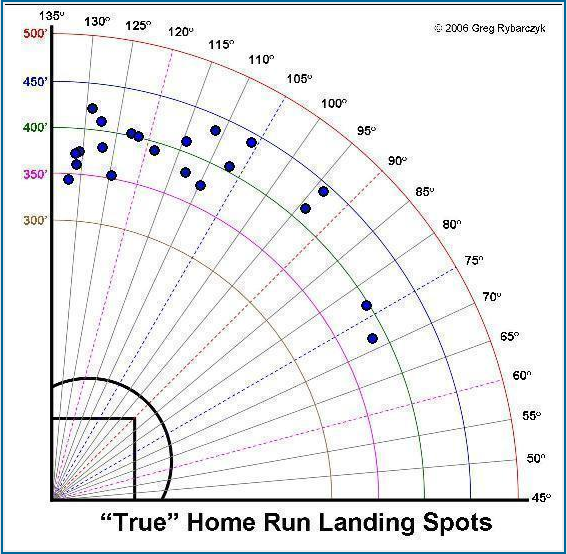 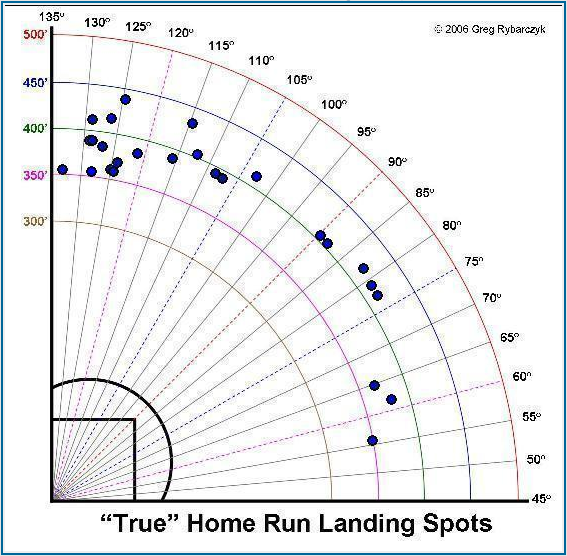 Another thing that happened last year is that Quentin returned to hitting to all fields. That was something he got away from in his injury riddled 2009 season.

From Texas Leaguers we can compare where he put all balls in play in relation to the field for the last three seasons: 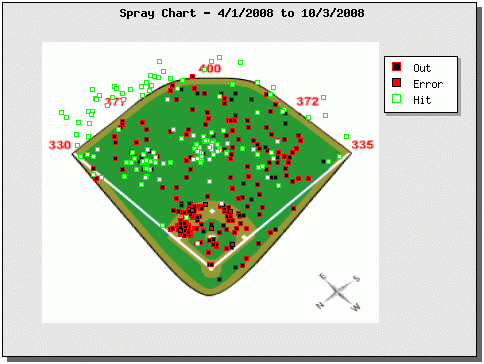 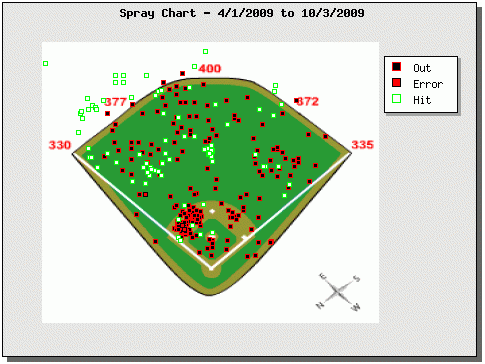 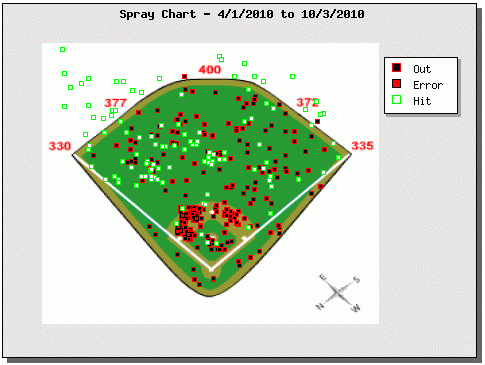 Again, note the 2009 season where the plots were much less evenly scattered in the outfield. The only thing that is markedly different from his 2008 and 2010 plots is there are notably fewer green plots (hits) in the outfield. That brings us to another, continuing problem with Quentin: his batting average on balls in play:

While Quentin made adjustments and began hitting the ball to all fields, his batting average (which bottomed at .236 the year prior with a subpar .221 BABIP) didn’t exactly recover. This time around, his line drive rate of 13.9 percent was the lowest of his major league career and again, his batting average on balls in play remained depressed, and he finished with a .241 BABIP. While that was a 20 point improvement from the previous season, it was still well below his career mark.

That brings us to another point about Quentin. While it’s generally accepted that a .300 BABIP represents an “average” player, not all players use that mark as a benchmark. Some players, like Billy Butler will always possess a higher BABIP, while others like Kevin Kouzmanoff will struggle to reach the .300 threshold. Quentin, with a career .251 BABIP in nearly 1,700 at bats falls into the latter category—with a thud. Here are the players with the five lowest batting averages on balls in play since the 2006 season (1,500 plate appearances):

That list is not for the faint of heart. Jones and Giambi were former sluggers who were beginning the decline phase of their career around the 2006 season. According to the Baseball Injury Tool, Crede has missed 283 days due to injuries over the last five seasons, mostly due to a bad back. And Barajas has missed time with back troubles as well, although he is your run of the mill hacktastic backstop as his career .284 OBP will attest. Jones and Giambi (like Quentin) had injuries as well.

One thing all the players on the above list had in common with the exception of Quentin was they were in their 30s for at least two years during this time span. (Crede is the youngest, Giambi the elder.) However, Quentin just finished his age 27 season. The player immediately following Quentin at number six? Ken Griffey, Jr.

It’s difficult to imagine a player in the prime of his career like Quentin on a list with some of the game’s elder statesmen, yet there he is.

Quentin has slowly been expanding his strike zone, losing some walks and picking up some strikeouts along the way:

It’s never a good thing when a player begins expanding the strike zone. In Quentin’s case, if this becomes more of a trend, he will be a virtual lock to finish with a sub .250 batting average. It’s subtle, but he can’t afford to swing and miss at any more pitches than he does.

Quentin, with his consistently abysmal BABIP, is playing old man baseball. Although, he has enough pop in those wrists that he will still provide value for fantasy teams this year. While the lack of singles and doubles continues to keep his average depressed, his resurgence of opposite field thump means we can look for some decent power numbers… for now. PECOTA believes he will delay the aging process for at least this year and projects him at .254 with 24 home runs and 69 RBI. It has him with a .289 TAv, which is a modest bump from last summer’s .283. I think based on his developing free swinging bad habits, Quentin will be hard pressed to reach that projected batting average. The home run numbers look good—if he plays a full season he would probably finish with closer to 30 long balls than 20.

Meanwhile, with his injury history and current struggles to collect base hits means the regression is lurking and when it truly happens, watch out. If you’ve held onto him in a keeper league for the last couple of years, hope he outperforms the PECOTA projection and sell high. Quentin will provide fantasy value for this season and possible the next, but the crash is coming.

You need to be logged in to comment. Login or Subscribe
ahemmer
his also atrocious in the field and runs the bases like he's wearing lead boots. It's been painful to watch for the last couple of years.
Reply to ahemmer
Ogremace
All this is wonderful... but ultimately unhelpful. I can't decide if I want to skip him altogether or if i let history be my guide and try to get a 28 year old hitting his stride.
Reply to Ogremace
sensij
I think that getting a 28 year old hitting his stride is an excellent idea. I'm not sure what that has to do with Carlos Quentin.
Reply to sensij
Edwincnelson
Having watched him every year the injuries have just taken their toll. The shoulder, the wrist, the knees, the ankle, the hamstring... After awhile you notice he's lost something, just a little bit, with every injury.
Reply to Edwincnelson
HeAdFiRsT
Quentin's 2008 stats that reflect a hitters skills are comparable to the elite hitters in baseball. If this guy put together a healthy season he could be golden.
Reply to HeAdFiRsT