Among qualified first basemen last summer, Billy Butler’s .318 batting average ranked him third, just behind Joey Votto’s .324 BA and Miguel Cabrera’s average of .328.  That’s a good foundation for fantasy, but Butler lagged in the power categories.  His 15 home runs ranked him 20th out of 24 players and his 78 RBI were good for 18th place.  While he was the best hitter on the Royals, his results were a mixed bag for fantasy owners who undoubtedly enjoyed the batting average, but wished he would realize his power potential.  Still, it was quite a productive year as his career-best .309 TAv ranked him eighth among qualified first basemen.

Entering the 2010 season, Butler’s goal was to cut down on his strikeout totals.  Given he whiffed a career worst once every 5.9 at bats the previous year, it was an admirable goal.  Under the tutelage of new hitting coach Kevin Seitzer, Butler worked on improving his contact.  The emphasis wasn’t on type of contact. (i.e. Hitting with more power or driving the ball to the pull field.) Rather it was just on making contact.  Period.

Give Butler some credit in accomplishing his goal.  He raised his contact rate from an already healthy 82 percent to a robust 84 percent.  (Major league average is 80 percent.) Since his contact rate was on the uptick, it follows he cut down his strikeout totals to one punch-out every 7.6 at bats.

While Butler was busy making more contact, the type of contact he made as compared with his efforts in the past was unchanged.  In fact, Butler has been amazingly consistent with his type of contact over his four year major league career.  The following table highlights his consistency since his debut in the 2007 season.

When analyzing young players, there’s always a bunch of talk about them “developing power.”  The prospect watchers like our own Kevin Goldstein will tell you that power is usually one of the last pieces of a player’s skill set to fall into place.  Given that in Butler’s rookie season of 2007, he was barely 21 years old, there has always been talk about Butler developing or growing into his power.  The promise has long been there:  he bashed 25 home runs in 379 at-bats in the hitters paradise known as High Desert (High-A ball) as a 19-year-old in 2005.

The idea that Butler can develop and refine his power is great in theory.  When you look at the above table and see his consistently high percentage of ground balls as all balls in play, you have to question whether or not Butler will ever hit for power.  Butler certainly has the ability to muscle up and hit a few taters.  However, at this point, it looks like he would have to retool his swing to hit for more loft.  Butler did hit for a little more power back in 2009.  That was the year he hammered a career best 21 home runs to go along with his 51 doubles and .492 slugging percentage.  Although the power came at a cost: reduced contact.

Butler's most productive power season was also the year where he struck out more often.  As previously noted, Butler wasn’t pleased with his increase in strikeouts per-at-bat from 2008 to 2009.  He worked with Seitzer to improve his contact rate.  (The increase in strikeouts wasn’t from chasing pitches outside of the zone.  Butler has always had a decent eye.  It was from swinging and missing at more pitches than ever before.)  Again, while Butler’s contact rate improved, his type of contact didn’t change.  That’s evident when comparing his spray charts from the 2009 and 2010 seasons.

These charts underscore Butler’s consistency.  It’s here we see that Butler’s power comes to his pull field with the majority of his home runs leaving the yard from left and left-center.  That's to be expected.  What is a concern is how many fly balls he hits to the opposite (right) field. 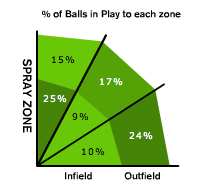 Why he’s not gearing up and driving more pitches to the pull field is puzzling.  Actually, it’s not that big of a mystery.  Butler approaches every at bat as if he has two strikes on him.  The goal is to put the barrel of the bat on the ball and make contact.  The result is a decent line drive rate, tons of doubles, and a festival of ground balls.  The extent to which he pushes his fly balls to the opposite field is highlighted when you break down the field into "zones" and look at the percentages of where Butler hits the ball into each one.  He's an extreme pull hitter when he puts the ball on the ground–nothing shocking there.  However, the fact he also puts almost a quarter of his balls in play into right field is amazing.

An interesting side note from Butler’s lack of developing power: his power dried up against left-handed pitching last year.  One season after slugging .553 with 16 doubles and eight home runs against southpaws, his slugging percentage dipped to .379 with just a pair of home runs and seven doubles against lefties in 2010. It was the first time in his career he hit for less power against pitchers who throw from the left.

Keep those 2010 splits in mind if you have Butler in a Scoresheet league.  He still owns a positive split against LHP (based on his cumulative performance from the previous two seasons) but it’s not as positive as you would think.  Then, there’s his defense.  Butler’s fielding rating isn’t as low as current full time designated hitters like Jim Thome and Travis Hafner, but he is the worst rated defender among full-time AL first basemen.

As Butler enters his age 25 season with a $30 million contract extension in his pocket, the talk will inevitably turn to his power potential.  The potential is certainly there, and will always be there.  To focus on his potential ignores the larger picture though; through nearly 2,200 plate appearances Butler has hardly ever wavered from his career GB/FB ratio of 1.4.  Butler is a ground ball hitter.  That’s who he is.  It figures that with his ground ball tendencies, coupled with his lack of speed (he could be timed down the first base line with a calendar) the Royals first baseman hits into a ton of double plays.  Last season he led the majors with 32 GIDPs and was only four off Jim Rice’s major league record.  If Butler doesn't change his type of contact, that record will be his within the next two seasons.

Butler can be an asset in straight roto because he will live around .300 while hitting third in the lineup, so he will have plenty of RBI opportunities.  Marc Normandin ranked him with three stars last spring and he's likely to land in the same area again for the upcoming season.  If you’re looking for a potential breakout power hitter in your upcoming draft, keep moving along.  Butler isn’t your guy.  Over 2,000 plate appearances and a static ground ball rate point to potential that will continue to remain untapped.

You need to be logged in to comment. Login or Subscribe
jlebeck66
So Billy Butler is Sean Casey without the personality.
Reply to jlebeck66
dianagramr
more like John Olerud without the defense, perhaps?
Reply to dianagramr
jlebeck66
Knock off a few of Olerud's walks and I could see that too.
Reply to jlebeck66
cbrown1970
Olerud is Butler's number 1 comp at BR through age 24. His number 2 is Kent Hrbek, who really found his power stroke when he turned 27.
Reply to cbrown1970
cbrown1970
I wouldn't go that far... But Casey has much better hair.
Reply to cbrown1970
nblascak
In a fantasy league that counts OBP and TBs instead of AVG and HRs, how much more would you value Butler?
Reply to nblascak
cbrown1970
That elevates him, but ever so slightly when ranking him among 1B. I can't speak for Marc and his ratings, but I would think this would push him to either the top of the three star first basemen or he would barely scrape into the bottom of the four star pile.
Reply to cbrown1970
yankeehater32
Funny you should ask, since I am in a league that uses OBP and TB and have Billy Butler on my roster.

He was worth $16 in standard mixed leagues last season. He ranked #31 in Total Bases in the majors (ahead of Ryan Howard, David Ortiz and Prince Fielder) and was tied for #112 in homers. He was #9 in average and #15 in OBP, so there isn't as much of a difference there. I'm not positive what the dollar value he gets out of that difference between TB and homers is, but I think it would be enough to bump him into at least the low four-star tier in your league type.