Hockey enthusiast @DownGoesBrown has the best summation of the recent Los Angeles Angels and Toronto Blue Jays swap, and in just 140 characters:

Love how the Wells trade includes a Napoli physical, as if Jays would walk away. Doctor: “He has no legs.” Jays: “Yeah, we’re OK with that.”

When news of the deal broke on Friday night, it sounded like a joke spread on Twitter by a fake account. This is the real-life equivalent of a fantasy owner trading keepers for a $55 Vernon Wells. Angels’ GM Tony Reagins is now the proud owner of two guaranteed contracts paying a combined $95 million to Wells and Scott Kazmir.

There is no phrase to describe the horror of this deal. On Twitter, our own Kevin Goldstein said that he called six different front office types in the league looking for a defense of the move from the Angels perspective, and received six identical responses of dead air on the other line. While poking fun at the Angels for making this deal (while simultaneously being envious of the evil genius that now runs the Blue Jays) is enjoyable, we need to focus on the important news: the fantasy impact the move has for Toronto, a team that has quietly put together one terrific off-season (Christina Kahrl has you covered for the real-life implications).

The Rogers Centre was the fourth-friendliest ballpark for home runs in 2010, trailing US Cellular, Coors Field and Yankee Stadium. It is amazing what a change in approach can do for a team, as the Rogers Centre was below league average for the long ball in both 2008 and 2009. The Jays hit 257 team home runs last year–with the surprising Jose Bautista leading the way—but he was far from a one-man show. Six other players on the team had at least 20 home runs and eight in all had double digit home run totals. They lost 95 of those home runs via trade and free agency but 41 of them came back when Mike Napoli and Juan Rivera joined the team.

Napoli is the big draw fantasy wise and the move to Rogers Centre could have a large impact on his fantasy production. Napoli has seen his roto value rise for four straight seasons in standard AL-only leagues, topping out at $15 this past season. The backstop started off his big league career as a three true outcome player who had double digit walk rates and high strikeout rates leading to low batting averages but he managed to hit over .270 in both 2008 and 2009 while hitting 20 home runs in both seasons. He set a career high for home runs in 2010 with 26 home runs in only 453 at bats but hit a very low .238.

Napoli has a concerning trend developing in his skills: his walk rate has declined each of the past five season and with it his BB/K rate. After a four percentage point improvement in his strikeout rate from 2008 to 2009, he gave nearly all of that back this past season.  It is unclear if new manager John Farrell will continue the grip-it-and-rip-it philosophy that Cito Gaston pushed but if he does, Napoli will fit right in. Jose Bautista is the only player left on the roster whose walk rate was above league average last season, and half the team struck out more than the league average.  Had Napoli played on the Jays last season, his 17.4 AB/HR ratio would have been third on the team trailing only Bautista and Edwin Encarnacion, on paper.  I say that because his ball in play data from katron.org shows that Napoli would have had a huge year had Rogers Centre been his home ballpark last season: 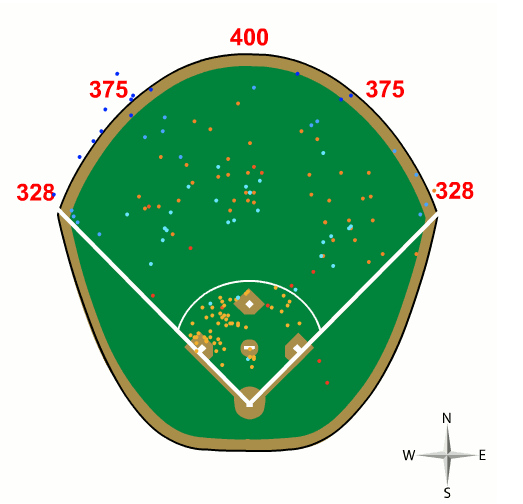 Count the dots beyond the fence and you get nine balls that stayed in the park in Anaheim last season that would have gone over the fence in Rogers Centre. If he had hit 35 home runs last season, his .238 would have been completely forgivable.  Needless to say, I love the move for Napoli’s fantasy potential in 2011 but I do not love what his addition and the addition of Rivera does to the Jays’ depth chart which was already a crowded situation.

The person most affected by this deal is most likely rookie J.P. Arencibia. After leading the PCL in home runs last season and following the departure of John Buck, it was assumed that Arencibia and Jose Molina would share the duties. Keeper league players who had Arencibia rostered were banking on a free starter and a very cheap power source yet had the rug ripped out from underneath them with this trade. It is unlikely the Jays will carry three catchers and since they signed Edwin Encarnacion to a new deal with the idea of playing him at DH and first, Arencibia is likely heading back to Triple-A to start the season rather than ride the bench trying to pick up scraps of at bats.

Napoli should also get some time at first base and DH throughout the season, but if the club does decide to leave Arencibia up, then Encarnacion is the likely victim of playing time which would be unfortunate. Encarnacion had a monster 2010 under the radar hitting 21 home runs in just 332 at bats and put up the second highest Isolated Power rating on the team trailing only Bautista as he had a career high slugging percentage.

257 home runs is going to be damn near impossible for the Blue Jays to repeat in 2011 but eclipsing 200 home runs is possible. If the Jays can find the defensively-challenged Napoli 500 at bats in 2011, 30 home runs is a real possibility, and if Encarnacion’s playing time is not affected by the new additions, I think he is the big sleeper for the Jays. For those of you that own Arencibia, I am sorry for your fantasy loss as he appears to be the odd-man out in this situation but don’t dream it’s over for him even if 2011 isn't looking great right now.

You need to be logged in to comment. Login or Subscribe
eighteen
Seems to me Napoli's better used as the RH half of a platoon at 1B (Lind can't hit lefties, Napoli can't hit righties), and backup C to Arencibia. Molina's expendable, and Arencibia doesn't look like he needs any more time at AAA.
Reply to eighteen
BarryR
Nicely written, and it now holds the record for the quickest irrelevant article. Time to break out the Ballpark in Arlington graphic for Napoli's fly balls.
Reply to BarryR
TheRedsMan
And problem solved. Napoli is now a Ranger.
Reply to TheRedsMan
moonlightj
Nothing like a good old trade to nuke an article! here is the hit map tool - only shows 4 more HRs for Napoli rather than the 9 he would have had in Arlngton.
Reply to moonlightj
pobothecat
To the opening point --- why Anaheim would do this --- I can sort of put together a rationale. First, give Anaheim credit for being good talent evaluators. They just are, raggedy last-12-months and Brandon Wood aside. And they decided mid-season that Juan Rivera is what he is --- and for weeks at a time not even that. Meanwhile, who am I to tell Mike Scioscia what he should look for in a catcher? Are we so sure the Angels haven't just unloaded dead-wood --- a 33 year-old 4th outfielder who might be hard-pressed to find a job anywhere in 2012 and a C/1B who can't play catcher and doesn't hit well enough to play first? As for Vernon Wells, well, all it takes is the belief that it really was injuries holding him back. There's no denying the return of his bat-speed. That's one real live ball-player for two you-can-have-'ems. I'd sure as heck do the deal in fantasy. That leaves the money. I figure they figure, "Let's just take our medicine and get it over with. All the big bats are off the market. We whiffed. We can either be screwed and non-competitive or screwed and competitive." Followed by rejoinders of "Plus, y'know, look at our division" and "What do we do if Bourjos hits .204 again?" Put Wells next to Morales somewhere in the 3-4-5 slots and you can at least conjure an on-paper contender. Without him, you're looking at an offense that's Mariners-level scary. Once you get past the astonishment, I'm not sure the Angels had any other choice.
Reply to pobothecat
moonlightj
I dunno -- this is a team that gave up Sean Rodriguez and Alex Torres for a broken down Scott Kazmir on a horrific contract. I like the addition of the talent, but the costs were way too much.
Reply to moonlightj