Slugging first baseman Carlos Pena hopes a move to Wrigleyville will rejuvenate his career, not unlike the move to Tampa saw him provide the Rays and fantasy players with a breakout year in 2007.  That was the best season of Pena’s career, where he hit .282 with 46 home runs, 99 runs and 121 RBI – all four stats were career bests. That was some pure fantasy gold from someone who wasn’t even supposed to make the Opening Day roster for the Rays.

It turns out, it was fool’s gold.

Pena has seen his batting average and TAv drop each season following that watershed season of 2007.  Since his peak year came during Pena’s age 29 season, as he entered his 30’s a decline in performance wouldn’t be all that surprising.  In fact, given his build and skill set, it would be expected for his numbers to slowly trend downward.  The issue is Pena’s decline hasn’t been gradual.  It’s been precipitous.  And extreme.

Here are his slash stats along with TAv since arriving in Tampa.

Of course, a decline in average as steep as one experienced by Pena will result in a corresponding dip in on base percentage.  It doesn’t help that Pena’s walk rate has decreased each of the last three seasons as well; although not as sharply as his stats illustrated above.  Like so many of his other statistics, Pena’s walk rate in 2007 was a career-best 16.8%, compared to last season’s rate of 14.9%.  It’s still healthy, but it’s also in decline.  The evidence is fairly clear that as his skills have been eroding, he’s expanding his strike zone and swinging at more pitches.  In 2007, Pena offered at just 19.8% of pitches he saw outside of the zone.  Last season, he was up to 26.6% on swings at pitches that would have been called balls.

While his discipline of the strike zone has crumbled, what hurt Pena as much as anything in the batting average department in 2010 was the fact that he simply hit a ton of balls at fielders.  He’s just one of those players who will never, ever post a respectable batting average on balls in play.  He owns a career .279 BABIP, but it's awfully difficult to ignore his .222 BABIP in 2010, which was the worst rate of his career.  There’s a reason his BABIP remains depressed.  And there’s a reason he posted the worst BABIP in his career last summer.

To help figure this out, here are his batted ball percentages since joining the Rays for that epic 2007 season, with a couple entries highlighted for interest:

Obviously, Pena has always had the strength to muscle the ball out of the yard.  His time in Tampa yielded an overall HR/FB rate 23.3% and his 2010 season wasn’t far from that benchmark.  His home run to fly ball rate wasn’t the issue last year.  It’s when a power hitter stops putting the ball in the air… That’s when you are going to have problems.

And that is exactly what happened to the Rays first baseman.  In an alarming development, Pena trended to the ground ball side of the divide for the first time in his career.  (Not counting the 37 plate appearances he had for Boston in the 2006 season.)  Nearly 45% of all balls he put in play were grounders, which was the first time he topped 40% for in a full season.

The increase in ground balls meant his power was down and his batting average – low by any standard – plummeted even further. 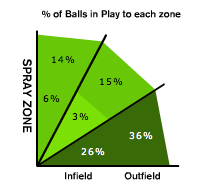 There isn’t a team in the league that doesn’t have this data.  That’s why whenever Pena comes up to the plate, the opposition employs the shift where the second baseman positions himself in shallow right field and the shortstop moves to the second base side of the bag.  The three infielders on the right side alignment has been extremely effective against Pena.  While an ordinary (unshifted) hitter can sneak a few grounders through the hole between first and second, the shift alignment means those would-be hits, are turned into sure-fire outs.

The next chart contains his batted ball plots from 2009 and 2010 from Texas Leaguers.

The red cluster between first and second base on both charts is a sad reminder that in Pena's case the shift is employed because it works.  While this cluster is consistent, it’s more pronounced on the one from last season… Because he hit about 50 more ground balls and he hit most those grounders right into the teeth of the shift.  If managers played Pena straight up, he would have no trouble getting his average to a level that would make him a fantasy asset.  Instead, teams will continue to use the shift and Pena will continue to ground into outs.  It’s not surprising to learn that last year, he hit just .137 when he put the ball on the ground.  In a study last summer at Baseball Analysts, Jeremy Greenhouse found that Pena was the most extreme ground ball pull hitter in the game. The shift on Pena is here to stay.

It’s interesting to note Pena’s xBABIP in 2010 was .321.  That’s an amazing 99 point gap between the expected and reality.  Under normal circumstances, that would provide a glimmer of hope that he will be able to push his batting average back near the .250 mark.  (Let’s face it, that .282 BA in 2007 was a one season wonder unlikely to happen ever again… Kind of like Ricky Gervais hosting the Golden Globes.)  Unfortunately, the fact he pulls an overwhelming majority of the grounders he hits, plus the continued use of the shift means he will never have a true BABIP as high as his expected BABIP.

Basically we have a home run hitter who is pounding the ball into the ground instead of the outfield bleachers and has seen his performance steadily decline since he entered his 30's.  The move to Chicago should help him in the home run department and the dramatic increase in the percentage of ground balls could prove to be a one year outlier, but any improvement won’t be enough to offset the losses you will continue to field in the batting average department, should you choose to draft him for your team.  His value would be slightly higher in Scoresheet leagues, where you can platoon him against RHP.  The batting average still isn't great, but it's better and it's where most of his power comes from as well.  Overall, the subpar batting average means he will also struggle to drive in runs.  Last year, he hit .233 with runners in scoring position and drove in just 15% of the runners on base ahead of him.  It’s not a stretch to imagine Pena approaching the 30 home run threshold.  Likewise, it’s not a stretch to see him struggle to boost his average above .220.  Pena is not a risk I’m prepared to take.

You need to be logged in to comment. Login or Subscribe
crperry13
Quality article, Craig. Thanks for the visuals...they add a lot to the content. Would love to see even more, site-wide.
Reply to crperry13
cbrown1970
Thanks. Always try to back up my points and illustrate with tables and graphs. Glad you like it.
Reply to cbrown1970
mikefast
Ditto. I always enjoy reading your stuff, Craig.
Reply to mikefast
cbrown1970
Thank you, Mike. Back at you.
Reply to cbrown1970
padresprof
I suspect the Rays had come to the same conclusion about Pena as Mr. Brown has even before the end of the semester. By the end, Pena had lost his position to a AAAA journeyman and a PTBNL utility infielder.

I do agree that it is nice to see an factually based presentation. Normally I pass on fantasy-based articles, but if more are like this, my behavior will change.
Reply to padresprof
cbrown1970
Thanks for the comments. While I'm on the fantasy beat, I'm certainly trying to write articles that can appeal to fans who aren't interested in that aspect of the game.
Reply to cbrown1970