December is almost here, and that can only mean one thing – baseball is another month closer! While the Hot Stove League is full of “news” stories about a certain team bidding against itself for the services of their beloved free-agent shortstop, some actual player moves have taken place that fantasy owners can already start planning around, as opposed to just guessing. Nor will “negative” news be covered, except in passing. For example, Micah Hoffpauir signed with a Japanese team, so the Cubs will certainly be looking at a player from another organization (or at least another position within the Cubs) to take over there. When they appear to be settled on someone, he'll get coverage. That still leaves some moves which can already be “taken to the bank”.   Of course, discussions on any players are welcome, so feel free to leave any questions about other players in comments, and the BP Fantasy team will respond either in comment or article format. 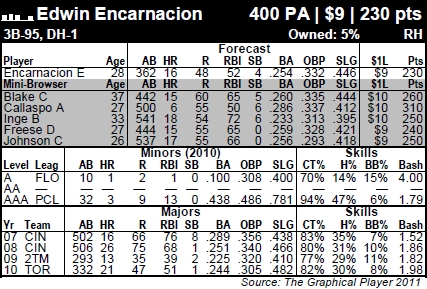 Last featured as a “Value Pick” on August 30, Edwin Encarnacion was dismissed with the note, “Another solid, SLG-heavy week from the Value Pick […] His strong 83% contact rate wasn’t enough to overcome his tepid 6% walk rate and a career-high 30.7% swing rate at pitches outside the strike zone.” He went on to clout eight (8) more home runs in September, of course, though his .279 OBP on the month tempered his real-life value.

Speaking of tempering real-life value, Encarnacion has constantly posted negative FRAA. In Oakland, Encarnacion would presumably only play the hot corner as a sub. Kevin Kouzmanoff – whose defensive metrics and reputation have improved considerably over the years since he was first called up with Cleveland – or Adrian Beltre (if there's anything to the rumors) – would be “Plan A” for the defense-minded A's. With a lot of lefty bats in the outfield, Barton at first base, and Pennington (a switch hitter who hits righty pitching better) at shortstop, it seems possible that the A's are just planning to slot Encarnacion in for Jack Cust, who wasn't offered arbitration before the 2010 season, and seems unlikely to receive it for 2011, either.

Encarnacion doesn't have the on-base skills of Jack Cust, but he's shown the ability to hit in all parks, as suggested by his very moderate home-road splits in the past (807 to 773 OPS despite playing in a couple parks which aided his offense significantly). The A's are hoping that their ballpark doesn't suffocate his right-handed power, but for fantasy purposes, this move bodes ill despite the track record of hitting on the road. Also a “yellow flag” is that Encarnacion has been oft-injured in his career so far. The plus side is that his signing hasn't received much hype, and he does have 100 home runs already in his 2540 career plate appearances, so he could end up being a cheap source of power. And with his expected price tag of nearly $6 million and Billy Beane's assertion that the team is looking to add power, don't expect him to rest very often when he's healthy. 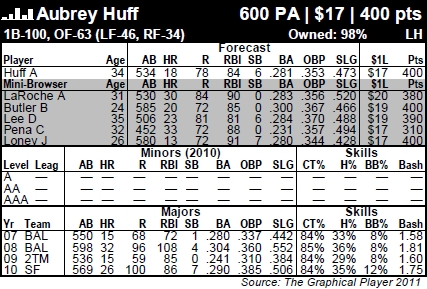 Surely, managers (and GM's) who had Aubrey Huff in 2010 were one of the happiest demographics around, including Brian Sabean, of course. As most fans know, he's a high-variance player. He's posted four seasons so far with an OPS of 884 or higher, yet has also been 778 or lower four times, including his 694 clunker in 2009, which allowed the cagey Sabean to pick him up for a pittance to help during the Giants magical 2010 season. The Giants re-signed him for a very reasonable 2-year contract, and are hoping he has another season like one of his three 4.4+ WARP seasons of his past.

Some indicators for how he might do in 2010 include the fact that he's swinging at a lot fewer pitches within the strike zone. As with most players as they mature, he's seeing more pitches per plate appearance, even though he's swinging at more pitches outside the zone. These are all symptoms of doing more waiting on a pitch he can drive, wherever it's thrown. That's a great advancement, and is encouraging for the future. But it's also necessitated by the slowing of his bat speed with age. At present, he has the best of both worlds, and the window of his new contract seems like a good gamble for the Giants on how long he'll remain good.

For fantasy purposes, bidding shouldn't be too crazy on him, even though the AL-to-NL transition seems to have been an elixir for him. All those sub-1.0 WARP seasons should still suggest caution. Sure, he has the talent to have another good year – potentially even a 6-WARP outburst like 2010 – but even if there was always a valid explanation for his bad seasons, such as injuries, he's had too many of them. He's worth pursuing moderately, but no regrets if he goes to another owner and has another good year, either – the risk is too high. He hit .307/.364/.524 combined with 86 HR from 2002-2004, and then hit .261/.321/.428 in 2005. In short, pay him like he's going to be a 3-4 WARP player, not the 6-WARP behemoth of 2010. Like the Giants did. 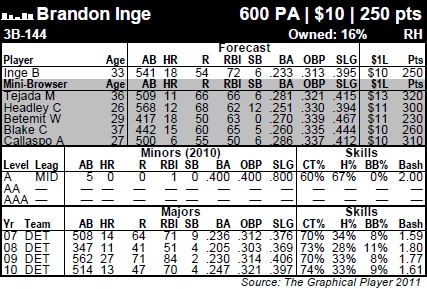 Coaches often talk about being “a baseball player”, suggesting a guy who does things "the right way" – shows a good attitude, hustles, gives 100% on defense, is a good teammate, etc., etc. (all the things which the Sabermetric community has claimed are “overrated” for years, generally speaking). Well, Brandon Inge is a poster boy for such things, and if any coaches out there want their young charges to learn to become a “baseball player”, the contract extension Inge got this offseason certainly provides the carrot. The Tigers are on the hook for $11.5 million for his age 34 and 35 seasons, despite the fact that he's a .237/.307/.394 hitter for his career. 2010 was one of his best seasons with the bat, and he produced 7.9 VORP, given 580 PA. That was good for 26th-best among third basemen. So, if the Tigers could have found a “replacement level” hitter who could play above-average defense (these guys aren't uncommon), they'd have been 8 runs worse off in 2010 than they were with Inge manning the hot corner. And no matter how you slice or dice the numbers, 8 runs aren't worth $5 million. Well, he's not getting better with age, so expect deterioration from that career stat line in 2011. The only good news here is that he is likely to hit his 15-20 HR (oddly, he's only hit between 15 and 20 once, instead 27 twice and 11-14 four times) and play every day.

You need to be logged in to comment. Login or Subscribe
Ogremace
Dombrowski tries so hard to be one of the cool GMs...
Reply to Ogremace
pobothecat
Warning: Unsolicited plug follows.

Looked up "Graphical Player 2011"--- found our friends Rob McQuown and Michael Street prominent on the masthead. For those previously unfamiliar with the publication (like me), there's a promo pdf available (G P 2010). So much data there it made my head hurt. A fantasy bible I may have to spring for this year --- as a companion to my Baseball Prospectus 2011, of course.
Reply to pobothecat