As you would expect, Hill’s batting average on balls in play is the lowest in both leagues.  By far.  For a little perspective on how miserable his average is when putting the ball in play here are the worst BABIPs in the major league going back the previous ten seasons.

Hill’s depressed BABIP is truly a season for the ages.

(By the way, how can you see Batista’s name on any list and not reflexively think “Out Machine?”)

We are conditioned to think that when someone like Hill, who owned a career .307 BABIP heading into the 2010 season, destroys rock bottom in a statistical category like batting average on balls in play, there has to be an element of rotten luck lurking around the bat rack.  Ordinarily, that could be the case.  Yet Hill seems to be the exception.  Here are his batted ball rates along with the corresponding BABIP going back the last four seasons.

Wow.  What happened to Hill’s line drive rate?  That’s really something special – in a horrible way.  Percentage-wise, there’s no one in Hill’s universe when it comes to how infrequently he squares up on a pitch and hits the ball on a line.  The next lowest LD rates are owned by Mark Reynolds (13.4%) and Carlos Quentin (13.9%).

I can’t figure out what bothers me most… The fact his line drive rate is so low, or the fact he’s basically transferred his lost line drive rate (and then some) into fly balls.  As you would expect, there's an explanation for Hill's evaporating line drive rate.

As Marc Normandin mentioned last July, Hill is swinging at a ton of pitches out of the zone and he’s actually making contact on a lot of those swings.  His swinging strike percentage is 13% – the same as each of the last four seasons – while the percentage of balls he’s chased out of the zone had jumped from 21% in 2007 to 31% in 2010.  Yes, he’s fouling off more pitches, but he’s putting a lot of “bad” pitches in play.  From Texas Leaguers, here is his swing plot from 2009, when he offered at 26% of all pitches outside the zone. 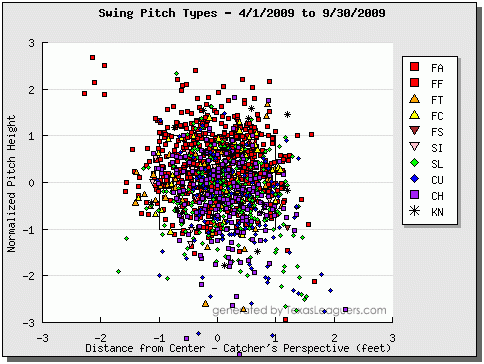 Contrast that to this year’s chart. 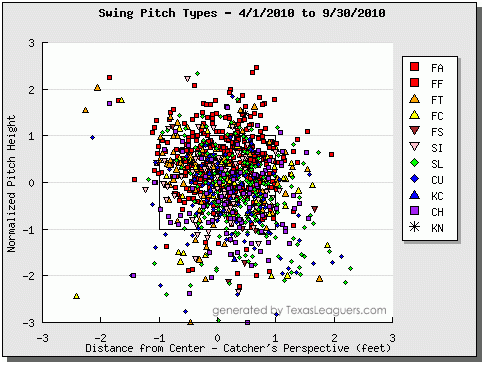 At this point, Hill has roughly 150 fewer plate appearances than 2009.  Yet, there is still a healthy dosage of plots low in the strike zone.  There’s also a huge increase on swings on pitches away and out of the zone.  He’s reaching for pitches, trying to pull them for power and instead dropping the bat head and hitting harmless fly balls to right field for easy outs.

To illustrate that he's not getting hits to the right side, here is Hill’s spray chart from last summer when he hit .286 with 36 home runs. 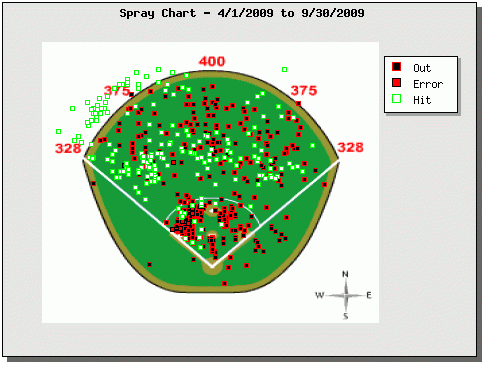 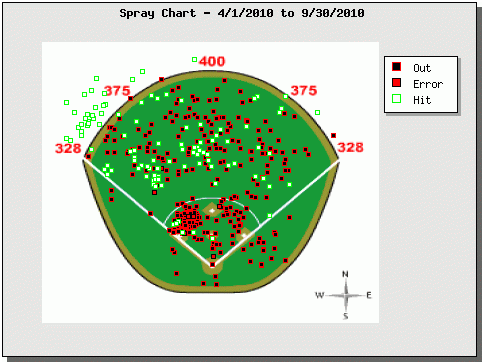 Note the virtual absence of hit plots in right field and the decline in hit plots in center.  Again, when he swings at the pitches out of the zone, he tries to pull the ball with loft but can’t get around so the result is a harmless fly to the right side.  Last year, Hill hit .250 when he went to the opposite field.  This year, he’s at .096 when going to the right side.

Hill is trying to pull the ball and crush home runs.  He’s also swinging at a ton of pitches out of the zone and making some really poor contact.  It’s the perfect storm for a crummy batting average.  He was a four star second baseman entering this season, but he has no hope of regaining that kind of value unless he completely overhauls his approach at the plate. He had six months to figure things out in 2010 and never seemed to recognize what what happening.  There’s little hope he will figure it out by next April.

You need to be logged in to comment. Login or Subscribe
rawagman
Hill missed most of Spring training and the early part of the year due to a bad hamstring pull. It took him quite a while to get going. I'm curious if the numbers show any splits pre- and post-All Star Break, as eh seemed to be much more (relatively) useful in the season's second half.
Reply to rawagman
dalbano
OPS has been 90 points better post break.
Reply to dalbano
cbrown1970
For what it's worth, his bump in OPS in the 2nd half is entirely in the slugging percentage. He did manage to raise his BA in the second half, though. There was improvement in the second half, but not enough to convince me he was on the right path.
Reply to cbrown1970
dalbano
Maybe it's naive of me, but to say there's little hope he figures it out by next April is a bit extreme. As a professional hitter, they use the off-season to evaluate things like this, look at video, and get back in the cage to get better.

I also think Batista is probably partly to blame for Hill's change in approach. You see a guy in your lineup hitting homerun after homerun after you led the team the year before and you are probably going to want to try and keep up. Just sayin....

While chasing as many bad pitches and making contact as much as the charts show, you would think he would be striking out a ton too, which isn't the case. His walk rate is up at the same time.

I think there's enough reason to think that he is a great bounce back candidate that will be attained a pretty good value next year.


I see Hill as a great value-upside pick next year.
Reply to dalbano
cbrown1970
I certainly don't think his average will hover around the Mendoza line all of next year, but his BABIP was fairly consistent from day one in 2010. Why wouldn't he make the adjustment during the season? Especially after his horrid 1st half. He has made "bad" contact for most of the year.

He'll bounce back, but I'm thinking he'll be around .240.
Reply to cbrown1970
garethbluejays2
Aaron Hill came up as a line drive hitter, good average, plenty of doubles. Both he and Adam Lind had big power years in 09 and have shown poor plate discipline in 10. Hill was pencilled in as the number 2 hitter this year. But he seems to think every at bat has to go out of the park. How valuable would a high OBP guy have been at the top of the Blue Jays order this season?
Reply to garethbluejays2
rawagman
How valuable has Yunel Escobar been?
Reply to rawagman
garethbluejays2
Escobar's 344 obp is second on the team and a massive improvement on what came before. Can't hurt.
Reply to garethbluejays2
drewsylvania
Dwayne Murphy is why. He's responsible both for Bautista and for the cratering of a few other players, IMO.
Reply to drewsylvania
brianjamesoak
Craig, I wonder if a lot of the Blue Jays changed their approach in this way, explaining the team-wide power spike. The idea being that it just didn't work out for Hill. Any idea?
Reply to brianjamesoak
drewsylvania
Dwayne Murphy.
Reply to drewsylvania