Now we are past trade deadlines in most leagues, it's time to do some serious scouring of the waiver wire to mold your team for the stretch run.  For your consideration, a pair of hitters who have each clubbed 10 home runs on the season and are available in most ESPN or Yahoo leagues:

One of the hotter bats in the NL currently belongs to Washington’s Bernadina.  He’s hitting everywhere in the Nationals lineup, so he’ll receive a healthy mix of run scoring opportunities, stolen base chances and RBI situations.  This season, he’s scored 29% of the time he’s reached base, just off the league average of 30%.  He’s attempting to steal in just over 10% of all stolen base opportunities, and with 13 steals in 15 attempts, he’s successful 87% of the time.   As far as RBI chances, he’s brought home 14% of all base runners – again right at league average.

As a member of the 10 home run club, he generates enough power to consider and his overall .438 slugging percentage is higher than guys like Shane Victorino and Pablo Sandoval.  Bernadina’s .321 BABIP may cause you to write him off, but his .327 xBABIP says he’s in the neighborhood.  As you can see from the following spray chart, the left-handed hitting Bernadina is most successful when he pulls the ball, making him much more effective against right-handed pitching. 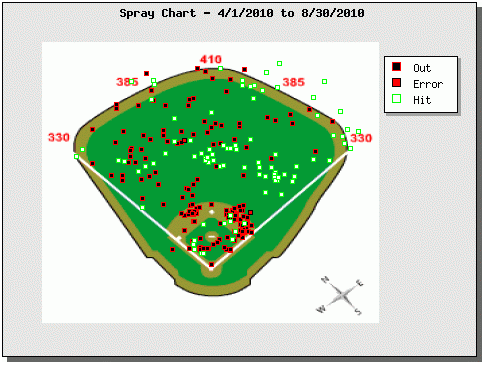 As pointed out in last week’s outfield Hot Spots, given the way Bernadina struggles against left-handers, he is essentially a platoon candidate.  Plus, there is the fact he strikes out too much (20% this year) and his 76% contact rate is on the low side, so he’s not a guy you need to consider long term.  However, in the short term if you’re in need of an outfielder (and at this point of the year, just about every move can be classified as short term), Bernadina is a guy who won’t kill you in any category.  He's a solid, if unspectacular, add.

In just 204 plate appearances for the Royals this season, Betemit has made quite an impression, bashing 10 home runs and posting a slash line of .326/.417/.571.  He has shown batting average promise before, hitting .305 for the Braves in 2005.  He has also shown the ability to go on a power surge, hitting nine home runs in 193 plate appearances following a mid season trade to the Dodgers in 2006.  However, he’s never put together a complete performance like he has this season.

A switch-hitter, he has had much more success from the left side over the course of his career, but this year Betemit is an equal opportunity hitter.

Betemit’s power appears to reside in right to right-center field no matter which side of the plate he hits from.  Of his 10 home runs, two have been opposite field taters and both came when he hit from the right side.  Here’s his spray chart as a right-handed hitter: 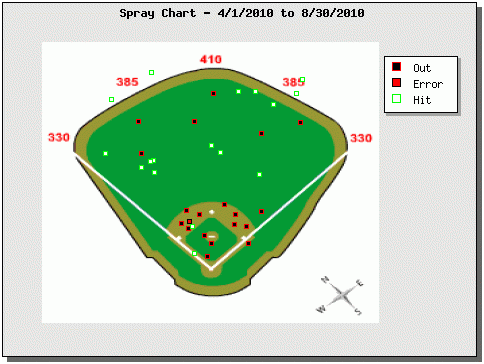 Compare that with his chart when he hits from the left side of the plate. 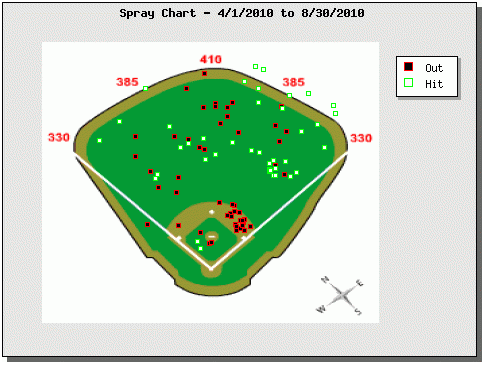 The cluster of short balls in the outfield (singles) flops from the left to the right and looks like he pulls more balls on the ground when he hits from the left side, but otherwise those are a couple of consistent charts.  In limited playing time, Betemit has found his stroke and is raking.  From both sides.  It helps that with a 0.59 GB/FB ratio, he's putting more balls in the air than at any other time in his career.  So even if his 13.5% HR/FB rate regresses (his career rate is 10.4% HR/FB) he won't lose too much in the HR department.  Although while it's all gravy today, with a .398 BABIP and a .310 xBABIP, it appears Betemit’s time above the .300 level will be short lived.  For a better gauge as to how he could perform, note his .298 BA since becoming a regular at the end of July.

However, with the Royals lacking any kind of sizzle in the heart of the order, Betemit is Kansas City’s anchor.  In that lineup, he won’t get as many RBI chances as a normal fifth place hitter, but driving in 16% of all base runners, he’s making the most of his limited opportunities.  The average major league hitter with 200 plate appearances has come up with 124 runners on base and has 22 RBI.  Betemit has hit with 118 runners on and driven in 29.  The only concern down the stretch is with the Royals lacking adequate protection behind him, the opposition will pitch around Betemit.  Still, if you’re in a battle for HR or RBI points in the final month of the season, Betemit is your man.

You need to be logged in to comment. Login or Subscribe
nblascak
Chacin or Bud Norris down the stretch? If I've figured it right, Norris will play @Washington, @Pittsburgh, and at home against Chicago in the last 2 1/2 weeks of the season.
Reply to nblascak
cbrown1970
As you probably know, I have boarded the Bud Norris bandwagon... But I think I'd take Chacin for a stretch run. He's been solid this season in the majors and I love what he did in the minors (1.51 ERA, 8.6 K/9). While his team defense isn't great, it is better than Houston's. Plus, the Rockies will certainly give Chacin more support.