On Wednesday night in Los Angeles, starter Vicente Padilla threw the best game of his career, tossing a two-hit shutout at the San Diego Padres while striking out nine.  It was just the latest in a long line of awesome Padilla starts.  Since returning from the disabled list on June 19, Padilla has made nine starts (60 IP) and has allowed just 35 hits and 13 walks.  That figures to a 0.8 WHIP.  During this span, he’s holding the opposition to a line of .168/.228/.288.  Quite a run from someone who owns a career 4.38 ERA and 1.37 WHIP.

There are several factors that have contributed to Padilla's sudden improvement.  His contact rate is at 83% on the season, which matches his career rate, but the key has been how much of that contact has been put in play.  Over the course of his 12 year career, hitters put the ball in play in roughly 71% of their plate appearances against Padilla, slightly ahead of the major league average.  This year though, Padilla has amped up his strikeout rate – he’s punching out 8.3 batters per nine, the best rate of his career and two full strikeouts above his career average – which, in turn, has suppressed the percentage of plate appearances where the ball is put in play.  For the season just 65% of all plate appearances end with the ball in play against Padilla.

Whle many of his key rates have improved, the second part of this equation is Padilla’s batting average against on those balls in play.  For the season, he owns a .232 BABIP against.  Not only is that the lowest BABIP against Padilla for his career, it’s the lowest in the entire NL this season among starting pitchers.

Now, on to Wednesday’s game…

Padilla threw pitches last night you would have passed in your car had you been driving on the interstate.  From Brooks Baseball, here is Padilla’s velocity chart: 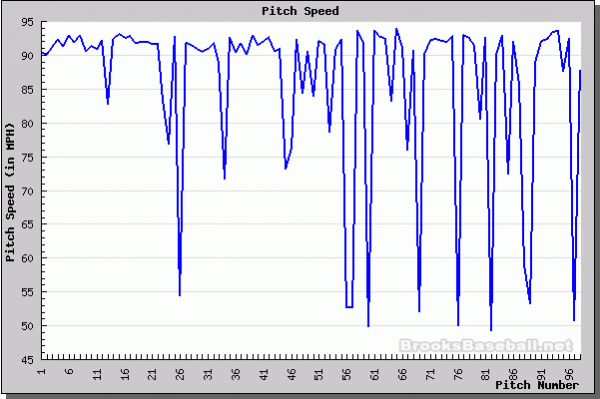 The pitches registering around 50 mph are what Dodger broadcaster Vin Scully calls “soap bubbles” presumably because they float to the plate.  And at that speed, they do float.  And flutter.  And dip and dive.  It’s not a new pitch for Padilla – he’s thrown it for a few years – and while it would seem to be a novelty, Padilla has incorporated the pitch into his arsenal enough this season that it’s become a weapon for the first time.

According to data collected to Matthias Koster, Padilla is throwing the soap bubble for a strike roughly 64% of the time.  That’s close to his aforementioned overall strike rate of 67%, but this isn’t some sort of magic bubble. It doesn't become magical until it’s put in play.  Hitters have put Padilla’s soap bubble in play 19 times this season and only once has it gone for a hit.  (And that was a home run, so technically it wasn’t even in play.)  Padilla is dipping into his wash bucket and throwing the soap bubble roughly 8% of the time since his return from the DL, versus just 5% prior to his injury.

Padilla primarily features a fastball with some heavy sinking action (a number of his fastballs are classified as sinkers by Pitch f/x), yet barely has a 38% ground ball rate on the season.  Since his return from injury and his current run of exceptional form, he’s getting even fewer grounders – 35%.  Overall, his ground out to air out ratio is 0.77.  It's only the second time in his career he's getting more outs in the air than on the ground. (He had a 0.99 GO/AO ratio in 2008 with the Rangers.) With such a high fly ball rate, it’s not difficult to believe he gives up his share of extra base hits – 37% of all base hits against Padilla this year have been either doubles or home runs.  He’s escaping damage because he’s doing a fine job overall of limiting base runners.  It certainly helps he pitches his home games at Dodger Stadium – a park much more forgiving to the fly ball than the Ballpark in Arlington or Citizens Bank Park in Philadelphia which were his two previous home yards.  (Evidence would seem to bear this out.  Padilla has a 1.61 ERA and 0.72 WHIP in 44.2 IP at home and a 4.86 ERA and 1.27 WHIP in 37 innings on the road.)

While the soap bubble is a fun pitch, it’s not some magic elixir that has turned him into a dominant starter.  However, by incorporating the soap bubble more than ever, Padilla has planted a seed in the mind of the hitter and is keeping them off balance.  So far, it’s worked beautifully.

(One more amazing note from Wednesday: From the fourth inning to the final out, Padilla threw a total of 41 pitches.  As you would expect from such efficiency, he threw a ton of strikes in those final six innings.  Thirty-five of them, to be precise.)

Padilla’s magical season has been a confluence of improvement (higher strikeout rate, lower walk rate), a little bit of luck (insanely low BABIP) and what we'll call the good fortune to pitch for the Dodgers.  His improvement is reflected in things like his 3.31 SIERA and overall, he’s been more good than lucky.  While it wouldn’t be a surprise if his WHIP inched higher in the season’s final two months, he’s solidified the other aspects of his game to make him a good pick up for fantasy owners down the stretch – especially in his home starts.  Float a few soap bubbles and you find a starter who can deliver some quality innings.

You need to be logged in to comment. Login or Subscribe
mpet29
Interesting that he only threw one "soap bubble" in the first 50 or so pitches, and then several of them closer to the end of the game.
Reply to mpet29
cbrown1970
Yeah, he was really pumping his fastball/sinker for the first three innings... Which reminds me... His velocity is up this year. After four solid years of decline, he's bringing the heat like it's 2005. It's a heckuva combination.
Reply to cbrown1970
ScottBehson
Awesome. Kinda a non-knuckleball knuckleball.
Reply to ScottBehson
NYYanks826
Seeing him throw these pitches reminds me of the pitches Henry Rowangartner threw to Alejandro Heddo to strike him out at the end of "Rookie of the Year". Just float it, Vicente.
Reply to NYYanks826
yankeehater32
Is there anyone sweaty enough to play Vicente Padilla in a movie though?
Reply to yankeehater32